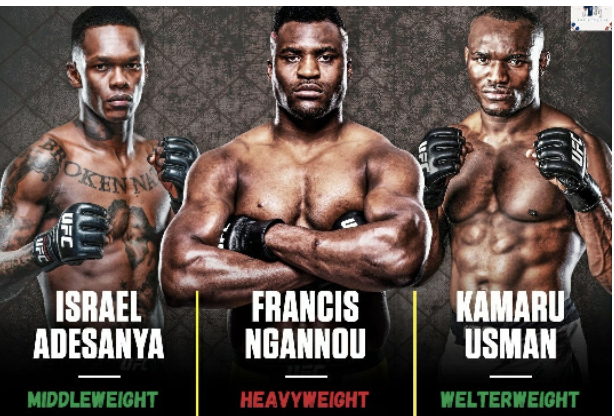 Despite less than 30 of the over 600 active fighters in the UFC being from Africa, three Africans have performed exceedingly well in the sport to earn titles among 12 weight division champions.

Celebrating the feat on his official instagram page, Adesanya, who is the current world middleweight champion wrote:  “An era in the history of sports that will never be forgotten. I am honored to be part of this trio in mixed martial arts”.

Usman beat Gilbert Burns with punches 34 seconds in the third round at UFC 258 held in February to defend for the second time his welterweight champion title which he first won in 2019.

The welterweight champion who had been away from Nigeria for over a decade, disclosed last Thursday in Abuja that he was planning to set up a sporting academy in Nigeria, as a way of giving back to the homeland.