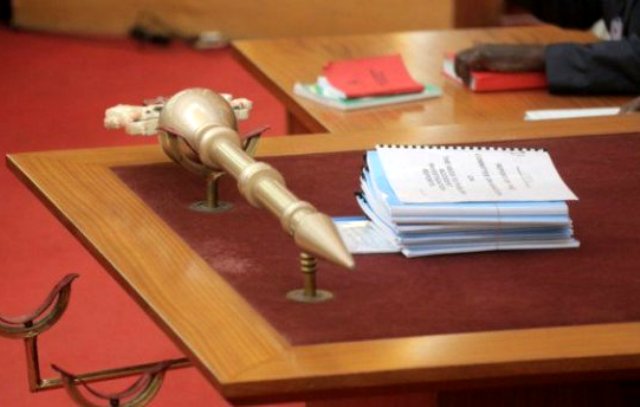 The invasion of the Senate chambers on Wednesday by thugs believed to have been smuggled in by Ovie Omo-Agege, suspended Delta State senator, and the successful whisking away of the mace – the Senate’s symbol of authority – has left many Nigerians in awe.

The major source of bewilderment is how a senator, who ordinarily should not have gained entrance into the senate chambers, managed to smuggle in thugs who successfully fought off the Senate’s sergeant-at-arms and took the mace away.

Many who reacted to the development on Twitter said the incident had proven that Nigeria’s security system is a huge joke, while others called for Omo-Agege to be banned from the Senate for life.

Some others said, albeit jokingly, that Omo-Agege’s actions shows that he is truly a Warri man, and according to a popular line in Nigeria, Warri no dey carry last.

But many others tried to link Wednesday’s incident to the $462 million approved by the Executive for the procurement of helicopters without the consent of the Senate.

During Tuesday’s plenary, the Senate had summoned Kemi Adeosun, Minister of Finance, and Godwin Emefiele, Governor of the Central Bank of Nigeria (CBN) to appear before it and explain the controversial procurement.

Here are a few of the reactions:

Scenes from the "operation" during which thugs loyal to Sen Ovie Omo-Agege (Delta Central, APC) snatched the Mace of the Senate from the Sergeant at Arms & made away with it.

Nigeria is a comedy series. pic.twitter.com/6rLwHSpJxX

Omo Agege (Leader of PMB 2019 senate group) storm the senate with hoodlum to steal the mace & cause commotion in relation to Senate investigation of Adeosun, Dan Ali, Emiefele for spending an unauthorized $462m to buy helicopters from a fake company.

They are fighting corruption pic.twitter.com/obfuCCuUEt

The mace has been taken away by hoodlums from the Senate? How did it happen?

Despite today’s wahala in the Senate, for me the Rivers State House of Assembly still tops the all-time ‘Stealing the Mace’ league standings… https://t.co/d0N4mF7RFv

1. APC is an embarrassment to our democracy.
2. Sen. Agege should be BANNED from the SENATE for life.
3. Go and get your PVC so we can salvage our democracy from APC. https://t.co/V3qE6ha3dh

It is as illegal for Omo Agege to seize the mace as it is illegal for him to be suspended from the Senate.
Two wrongs don't make a right, but let's not pretend that one is perfectly normal but the other isn't…

The Mace,the symbol of authority of the Senate, the totem to the power of the people was "kidnapped" today from the chamber of @NGRSenate , in the Three Arm Zone, within the FCT.

Let the imperative of this brazen act wake all of us up to the reality of the season.@segalink

Senate confirms Owasanoye as ICPC chairman 16 months after his nomination