Where is the book, Mr President? 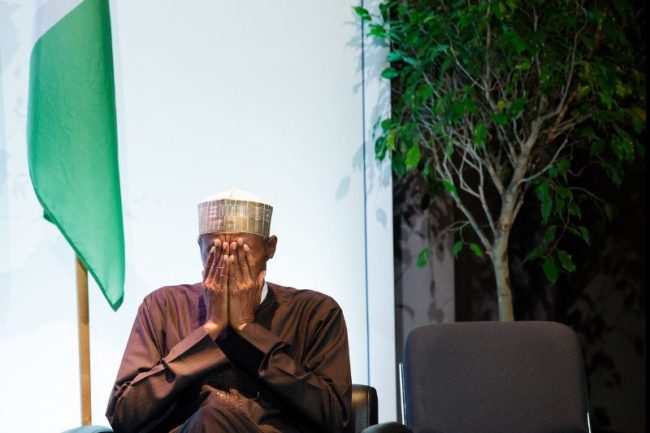 The foregoing message, one of the numerous of such being hawked on social media, sums up the challenge of the moment as entrepreneurs of violence take over our country while the authorities appear helpless. And with that, the implacable foes of President Muhammadu Buhari impute ethnic and religious motives to his seeming indecision in the face of the tragedies. Yet, as unfortunate as some of the postings on social media—including inflammatory and inciting videos from otherwise respected clergy men—may be, the president has only himself to blame for the manner in which he and his administration are being profiled.

In April this year, while receiving in London the Archbishop of Canterbury, Justin Welby who raised the issue of the killings in Benue State at the time, President Buhari said: “The problem is even older than us. It has always been there, but now made worse by the influx of gunmen from the Sahel region into different parts of the West African sub-region. They were trained and armed by Muammar Gadaffi of Libya. When he was killed, the gunmen escaped with their arms. We encountered some of them fighting with Boko Haram. Herdsmen that we used to know carried only sticks and maybe a cutlass to clear the way, but these ones now carry sophisticated weapons. The problem is not religious, but sociological and economic. But we are working on solutions.”

The import of that statement by the president is that the killings were being perpetrated by non-Nigerian mercenaries. Yet that statement contradicted an earlier claim on 15th January while receiving a delegation from Benue State led by Governor Sam Ortom. On that occasion, this was what the president said: “Your Excellency, the governor, and all the leaders here, I am appealing to you to try to restrain your people. I assure you that the police, the Department of State Service (DSS) and other security agencies have been directed to ensure that all those behind the mayhem get punished. I ask you in the name of God to accommodate your countrymen. You can also be assured that I am just as worried and concerned with the situation.”

What that presidential declaration implied is that the killers could be identified and brought to book because they live within the communities and that the challenge is local. That much was reiterated, albeit in an irresponsible manner, by the Inspector General of Police, Mr Ibrahim Idris and Defence Minister, Brig-General Dan-Ali (rtd) both of who made excuses for the killers. “Obviously it is a communal crisis for herdsmen are part of the community. They are Nigerians and are part of the community; are they not? Let’s use the example of Benue, you know most of these states where you have several languages, you know it is an issue of communal misunderstanding. I think what we should be praying for is for Nigerians to learn to live in peace with one another” said Idris who spurned a presidential directive to move to Benue after the tragedy without any consequence.

Meanwhile, on January 25 this year, shortly after he joined other security chiefs to meet with the president on the Benue massacre, Dan-Ali, another loose cannon, said: “Since Independence, we know there used to be a route whereby these cattle rearers use. Cattle rearers are all over the nation, you go to Bayelsa, you see them, you go to Ogun, you see them. If those routes are blocked, what happens? These people are Nigerians, it’s just like you going to block river or shoreline, does that make sense to you? These are the remote causes. But what are the immediate causes? It is the grazing law. These people are Nigerians, we must learn to live together with each other, that is basic. Communities and other people must learn how to accept foreigners within their enclave, finish!”

When public officials speak so recklessly at a time several families were mourning the victims of a brutal massacre and there was neither a reprimand nor any sanction, why would the president not be accused of partisanship? And to compound the problem, almost on a daily basis, several other silly excuses are being manufactured for the killings with the latest being that the perpetrators are some unnamed corrupt politicians. How can a government be so cynical in treating an issue that is already tearing the nation apart aside the lives of hundreds that are being lost almost on a daily basis?

However, in the course of the debate on the killings in the House of Representatives on Tuesday, a member warned that nobody should use the current crisis to criminalise Fulani people. It is a timely warning. In a Twitter chat at the weekend, I had reason to point out that we have a Fulani family in my church which sounded unbelievable to a respondent until I gave sufficient information to clear his doubts. What I did not add is that, for the first time last Sunday, the matriarch of the family actually gave a testimony. Incidentally, the interpreter was my brother, Bello Bisalla who happens to be very close to the family despite the fact that he is from Southern Kaduna and they are from Sokoto.

Although the essence of what Mrs Umma Abdullahi said last Sunday was to thank church members for the love shown to her, the husband and their wonderful children since they joined about a year ago, it did not escape my attention that her first sentence, said in a solemn manner, was “we all know what is happening to Fulani people in Nigeria today”.

What I get from that statement is that all Fulani people are being criminalised in our country by the action of a few people who ordinarily ought to be brought to book if the security agencies were alive to their responsibility. That perhaps explains why Mrs Abdullahi would be surprised that members of our church are treating them with love rather than hate. Yet, it is the federal government that has unwittingly created this tragic situation that raises serious questions about our diversity and endangers all of us.

Are there people exploiting the tragedy for political purpose by using it to send out all manner of fake and inciting messages about the president and Fulani people, especially on social media? For sure there are and their operational headquarters is WhatsApp. Indeed, we are living in a period when nine out of ten of the publications being spread, especially on that particular social media platform are politically motivated fake news. In the past I used to remonstrate with senders by directing those who still have doubts to snopes.com and other websites that easily put a lie to such messages. These days, I simply just delete the inciting messages that have no basis in fact, along with those gory photographs and ‘prophecies’ that do not, any way or form, advance the gospel of our Lord Jesus Christ.
The authorities can do more but several herdsmen are actually being tried and sentenced for their crimes which suggest that the law can deal with the problem if we are serious. In May 2016, for instance, a High Court sitting in Asaba, Delta State sentenced two herdsmen identified as Hassan Abidu and Yakubu Salem to 20 years in jail over illegal possession of firearms. In August last year, an Ekiti State High Court sentenced a herdsman, Ali Haruna, to two years imprisonment for destroying crops worth N1.5 million in a farm. And four months earlier in April 2017, all the seven herdsmen who kidnapped Chief Olu Falae for ransom on his farm in September 2015 were sentenced to life imprisonment without an option of fine.

For sure, the Buhari administration deserves all the blame for allowing the problem to fester even as the ethno-religious narrative takes hold. The killings in Zamfara State have been horrendous but because it has no religious or ethnic utility, it has not parlayed into the popular narrative. That explains why to deal with the problem, there is an urgency to put new people in charge of our military, law enforcement, intelligence and security agencies if only to signal a new approach but we all have a role to play here. In the final analysis, all Nigerians are at risk and should therefore pull together rather than apart, even though the president must lead the charge by rallying the country for peace and prosperity. This is a time that demands leadership.

To worsen matters, on a day that gunmen invaded a suburb of Abuja, terminating the lives of seven policemen at a go and just three days after a similar incident in Akwa Ibom State in which two police officers were gunned down by unknown assailants, hundreds of policemen, wearing different colours of headgears and brandishing their guns, went on rampage in Maiduguri, Borno State to protest the non-payment of their allowances for six months. Can there be a greater security risk than putting guns in the hands of people who are practically left to fend for themselves?

While the whole Muslim versus Christian narrative and the infantile charge that someone wants to ‘Islamise Nigeria’ are both ridiculous and unfortunate, at the heart of the crisis in the middle belt are two problems. The first is the friction over scarce resources between farmers and herders while the second is the age-old issue of settler-indigene. In the mix is the immediate challenge of restoring law and order. That it seems intractable is because majority of the critical stakeholders in the region do not trust those who currently head the law enforcement and security arm of government because they have, by their words and deeds, shown very clearly that they are not neutral.

While I intend to deal with the wider problem in the region which I believe can be situated within the context of agrarian/pastoral economy and settler-indigene contention at a more auspicious time, the president must, as a matter of urgency, restore law and order not only in the middle belt but indeed across the country. And it is clear that he cannot do that with a team that is interested more in regime protection than national security. If he continues with them, then those who accuse him of being complicit in the killings that now define our country will also continue to have a field day to our collective detriment and his own shame.

This article by Olusegun Adeniyi was first published by ThisDay newspaper. The author can be reached via his Twitter handle, @Olusegunverdict, or through his website: www.olusegunadeniyi.com

How can I do harm to the same people that elected me, says Buhari to CAN delegates