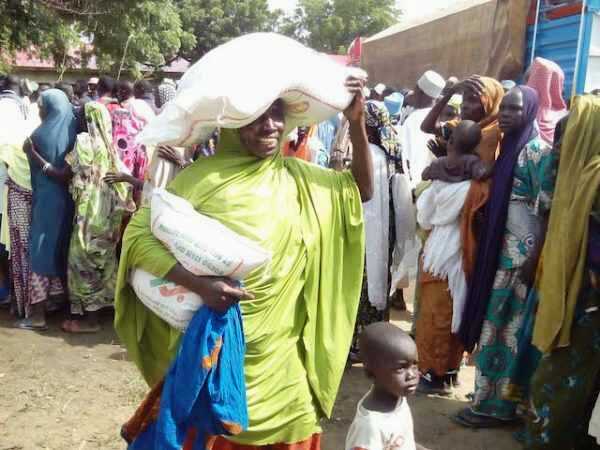 The World Bank has commenced the distribution of food items and livelihood support packages to internally displaced persons, IDPs, who recently returned to their homelands in Borno.

The distribution of the packages will be done through the Borno State FADAMA Office, and a total of 6,666 households in 166 communities across 24 of the 27 local government areas of Borno are slated to benefit.

Flagging off the distribution for Adam Kolo, Zannari A and B communities in Mafa Local Government on Thursday, the Permanent Secretary Borno State Ministry of Agriculture, Zanna Garga who was represented by the Ministerial Secretary in the ministry, Baba Musa said the package is from the World Bank through the FADAMA office under the Northeast food security and livelihood emergency support to alleviate the immediate problems in the region.

He said the support was coming at the right time, a time the largely peasant population are returning to their respective communities to start life afresh.

He enjoined the beneficiaries to use the items for the purpose intended to enable them kick start agricultural activities to recover their losses through sustained means of economic generation.

Agriculture, he said remains the only way out of the current economic recession,stressing that it would enhanced socio-economic activities and food security.

He however appealed to the World Bank to increase the scope of beneficiaries because of the alarming number of those affected by the insurgency.

Earlier the State FADAMA Projects Coordinator, Bukar Talba said each household selected will receive two months foodstuff comprising two bags of Rice, one bag of bean, five sachets each of Maggi Cube and Salt, one gallon of vegetable oil Sewing and Grinding Machines as well as ram and ewe as ruminant for agricultural purpose.

Thirty percent of the forty households selected in each community, he said are women adding that the jobless are also considered under the cash for work concept of the project to reduce poverty and social vices in the communities.

Talba said the multiplier effect of the 166 benefiting communities is projected at over fifty three thousand persons on an average of eight persons per household.

Speaking on behalf of the beneficiaries, Ya Karu Bulama Makinta, Wasila Abdullahi and Mallam Abubakar promised to use the items for the benefit of their families.