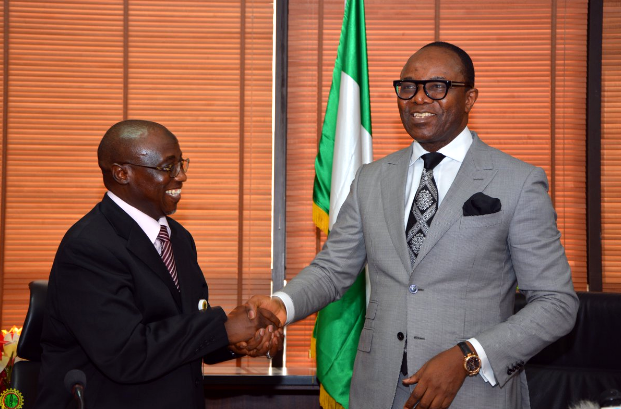 The leaked internal memo written by Ibe Kachikwu, Minister of State for Petroleum resources, to President Muhammadu Buhari, is still generating heated conversations among Nigerians on the social media.

According to the memo dated August 30, Kachikwu had complained bitterly about the unprofessional attitude of Maikanti Baru, Group Managing Director of the NNPC, as well as how he (Kachikwu) was being sidelined in the running of of NNPC’s activities.

It is yet unclear how the memo got leaked to the press but Nigerians care less and have taken to Twitter to express their opinion on the matter.

As usual, some of the expressions were comical, with one particularly suggesting that Buhari may not even read the memo, and another saying Kachikwu was too good for the mess he was instigating. One even advised him to turn in his resignation.

Here are a few of the interesting comments:

Ibe Kachukwu is too good for this mess. He should resign. How can you not have access to your direct boss? Smh. https://t.co/PpwnMfgcn3

If you’re a minister and consistently try to see your principal without success. Resign. Minister no be by force.

Only Kachikwu didn’t see this coming. After his removal as NNPC GMD I knew this was going to happen. I said it then. pic.twitter.com/DUFjJCk2zY

This letter is too long for Buhari to read sha. Someone will just summarize it and say, “Kachikwu is only greeting you sir.” https://t.co/GpDpjal54e

Kachikwu a 5%er actually expects Baru a 97%er to get his approval before awarding contracts or making appointments in NNPC? ????????

Buhari wanted somebody to do his bidding at NNPC & embark on a wild goose chase to discover oil in the North. That person is not Kachikwu.

I expect to see “Kachikwu’s letter to Buhari” sold in Lagos traffic – by Thursday at the latest.

We may soon hear about how Ibe Kachikwu sponsored IPOB & how Nnamdi Kanu is currently hiding in his poultry farm.

And Kachikwu’s letter ought NOT to have been leaked! Mr President, ACT. Content alarming!

Something is wrong at Aso Rock, first Aisha, then mama taraba, now Kachikwu.

#KachikwuAllegations So let’s focus on the substance of Kachikwu’s allegations, which are pretty damning-corruption, poor governance, tribalism and no due process at NNPC!!! Will Kachikwu be Buhari’s Sanusi???