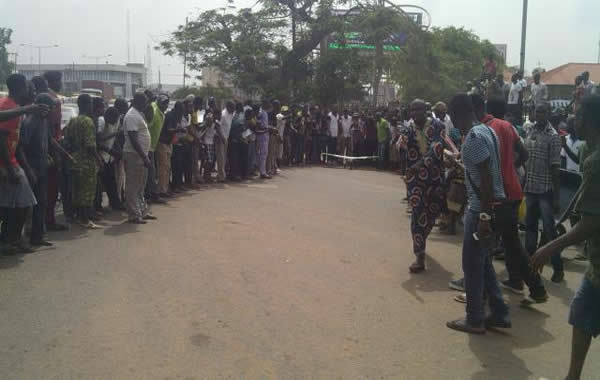 Caption: A crowd converged at the King’s Square in Benin to watch the takeoff of Ajine’s drone.

A twenty-year-old Nigerian from Delta State, Aghogho Ajine, on Thursday launched his version of an Unmanned Aerial Vehicle more commonly known as drone which he built from plywood.

The incident which took place at the King’s Square in Benin,  Edo State, drew a large crowd that gathered to watch the invention as it flew through the sky, controlled from a hand-held device.

Ajine in an interview with newsmen said he had never been to a formal school and got the idea to construct the drone from personal home study. 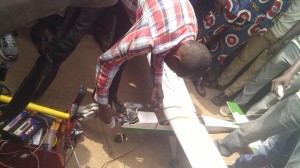 “I am from Delta State. I have not been to any school before. My house is my school. I learned it at home from my research. I used plywood to build it,” he said.

The display at the King’s Square however caused heavy traffic in the area, prompting officials of Edo State traffic agency to seize the young inventor, forcing him to part with an unnamed sum of money as payment for his offence.

However, those who had watched the exhibition protested at the action of the officials, compelling them to refund the money collected.

The first drone to be locally built in Nigeria was designed and manufactured by the Nigeria Air Force, NAF in conjunction with other local institutions and was launched in December 2013 after eight years of work.

The drone which was named “GULMA”, meaning “gossip” in the Hausa language, cost of $3 million.

It is believed that the invention can be deployed to the troubled North East region to monitor the activities of the Boko Haram sect, which has been coordinating and launching guerrilla attacks from the rugged mountains and forests of Maiduguri, Borno.

Drones are deployed in war situations to gather intelligence in areas where ground troops can not easily accede and are popular with the American military operations in Afghanistan and Pakistan.

However, many people are increasingly advocating for the use of drone in non – military situations. For example, journalists are already exploring the possibility of deploying drones in crisis or disaster situations to gather information and photographs in places where on – the – ground reporters can not safely reach.

NDLEA to operatives of sister security agencies: You won’t…