ABOUT 18 months to the 2023 presidential elections, a number of Nigerian politicians are being touted as messiahs that would take the country to the promised land after the tenure of President Muhammadu Buhari.

Buhari was also presented to Nigerians as a messiah when he contested and won the presidential election in 2015.

Six years after Buhari took office, many Nigerians are dissatisfied with his performance and no longer believe he is the messiah, as his campaigners earlier promised.

With the tenure of the Buhari administration winding down, another set of politicians is being positioned as the country’s saviours come 2023.

2023: Over 500 groups campaign for Atiku, Tinubu, Osinbajo, Bello on Facebook

Although he insists that he has no interest in contesting the presidential election, Vice President Yemi Osinbajo is being touted as the ‘most qualified’ to succeed his principal, Buhari. 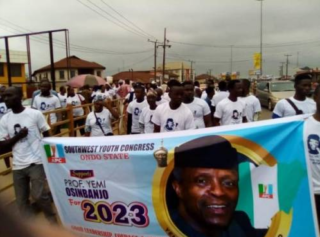 Several groups have sprang up to market the VP as the messiah that Nigeria needs.

In August, one of such groups, Osinbajo Grassroots Organisation (OGO), declared that Osinbajo was the future of Nigeria.

National Convener of OGO Foluso Ojo, in a statement, said on several instances Osinbajo had displayed competence and ability to govern Nigeria.

“We have identified in the vice president a leader of unimpeachable character; someone who can continue on the good works already started by President Muhammadu Buhari. We do not need anyone to tell us that Prof Osinbajo is a pathway to Nigeria’s future from 2023,” the group said.

The OGO is not the only group that is telling Nigerians that Osinbajo is the answer to the country’s problems.

A group of stakeholders in the All Progressives Congress (APC) known as Progressives Consolidation Group (PCG), led by Ahmed Mohammed and Eberechukwu Eli Dibia, in a letter dated July 14, titled, ‘APC and the future of Nigeria: Why we must get it right and consider the Osinbajo option in 2023,’ made a case for Osinbajo to succeed Buhari. 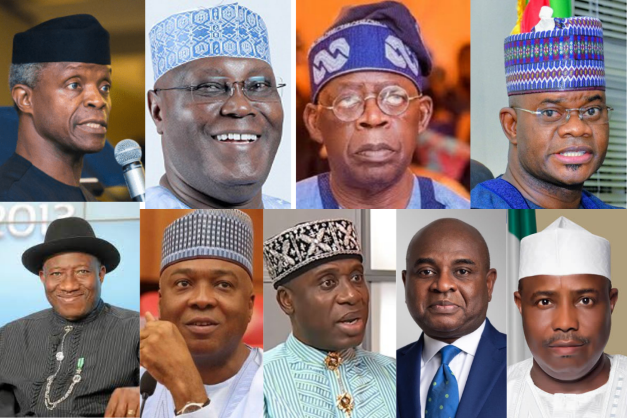 “We, members of the Progressives Consolidation Group, hereby solemnly join our voices with that of many others in appealing that you throw your weight behind our call for consideration of an Osinbajo successor administration after that of President Muhammadu Buhari would have run a full course in 2023,” the PCG said in the letter addressed to the Senate president.

The group expressed the belief that giving Osinbajo the APC ticket “would certainly be the best assurance of stability and progress for extant developmental objectives.”

Nasarawa State governor appeared to have bought into the PCG’s moves when, at a meeting with the group at Government House Lafia on September 20, he described Osinbajo as the most qualified candidate to succeed Buhari.

“Osinbajo is the most qualified candidate and only sellable product that can succeed President Muhammadu Buhari in the forthcoming 2023 presidential election across the country,” the Nasarawa governor said.

Election campaign posters bearing the pictures of Osinbajo, for president, and Borno State Governor Babagana Zulum, as his vice president, have raised eyebrows, even as Osinbajo’s spokesman continues to insist that he has no intention to run for president in 2023.

Osinbajo’s 2023 moves are likely to be connected to that of his former boss, former Lagos State governor Ahmed Bola Tinubu. Osinbajo was attorney-general and commissioner for justice under the Tinubu administration in Lagos. 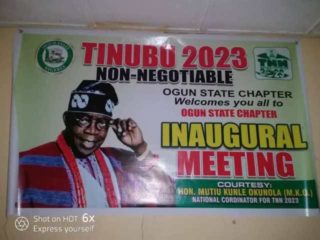 Tinubu’s campaign appeared to have taken off already and all that is remaining is for him to formally declare his intention to contest the presidential election.

One of the several groups that are promoting Tinubu’s presidential ambition, the Nigeria Diaspora for Asiwaju (NDA), said supporting the former Lagos governor to run for presidency in 2023 was a collective task for all Nigerians, irrespective of tribe and religion.

“Tinubu stands out as one politician with the best résumé to consolidate on the next level milestones of the President Muhammadu Buhari-led administration,” Director-General of the NDA Akin Badeji said in a statement.

Tinubu is currently in London where he is recuperating after undergoing surgery.

Besides Tinubu being marketed as the most qualified to consolidate on the achievements of the Buhari administration, it has also been suggested that Buhari is morally bound to hand over to the former Lagos governor due to an agreement that he (Tinubu) would take over from him when he completes his second term in 2023.

Pioneer National Chairman of the defunct Congress for Progressive Change (CPC) Rufai Hanga said the agreement was the basis for Tinubu’s support for Buhari’s election in 2015 and reelection in 2019.

Like Tinubu, it also appears that a former Vice President Atiku Abubakar has long ago commenced campaigning for the 2023 presidential election. 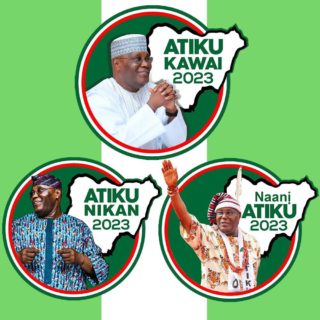 Atiku was the candidate of the PDP in the 2019 presidential election, which he lost to the incumbent – APC candidate Buhari.

A memo which Atiku addressed to the leadership of the PDP in August was seen as an unofficial announcement of his desire to once again run for president in 2023.

In the memo, Atiku expressed gratitude to PDP members for supporting him during the 2019 elections and went further to observe that the party was now better equipped to win the 2023 polls.

“We are fully prepared to work in synergy to restore hope, pull Nigeria back from the brinks and relive the patriotic spirit of our founding fathers! I believe that together we would rebuild our broken fences, mend our cracked walls, restore hope, and return Nigeria to the path of greatness again. Surely, we can, and we must,” parts of the memo read.

While Atiku’s media team dismissed reports that the memo signalled the former vice president’s intention to run for president, on September 19 – a day after governors of the 17 southern states demanded that the region should produce the next president – 17 political parties and civil society groups in Delta State, under the aegis of Coalition of Atiku Support Groups Initiative (CASGI), announced that they had endorsed Atiku for the 2023 presidential election.

“Atiku Abubakar is the most placed to lead PDP back to power considering his last performance and his demonstrability of wealth creation and economy building,” Director General of the ‘CASGI ATIKU 2023′ Obinna Okorie said during the inauguration of the group in Asaba, Delta State.

Kogi State Governor Yahaya Bello indicated his interest in the presidential election when he declared that he would give a positive response to Nigerians, including youths, women and ‘very objective elite’ who he claimed were asking him to run for president in 2023. 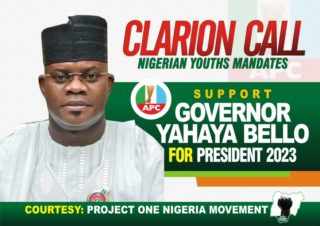 One of the groups promoting Bello’s presidential ambition, the Christian Youth Leadership Network, in August described him as “the only right choice for president that can actualise the collective dreams of Nigerians.”

Bello is also being marketed as a youthful leader who has the vigor to tackle the country’s many challenges.

“What we need in 2023 is a young man, youthful and useful governor, pragmatic leader with a proven track record, someone who we can look up to as an ambassador of the Nigerian youths, and we are proud this young man is the person of Alhaji Yahaya Bello,” Director General of the GYB2PYB Support Group Oladele Nihi said at a recent rally in Lagos. 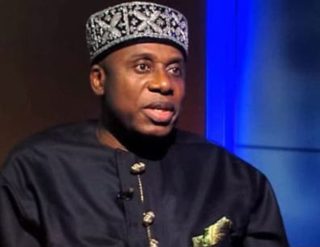 However, a chieftain of the APC Alex Kadiri, who represented Kogi East in the Senate from 1999 to 2003, recently described Amaechi as the best option among all those being touted as Buhari’s possible successors.

“Whether you like it or not, Rotimi Amaechi stands as a viable person. He has the experience, and good health. Anybody we are considering today as president must be healthy,” Kadiri said.

Former Deputy Governor of the Central Bank of Nigeria (CBN) Kingsley Moghalu contested the 2019 presidential election as the candidate of the Young Progressive Party (YPP) and lost to Buhari. 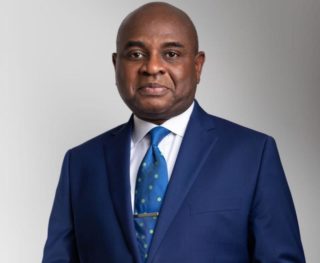 Moghalu has declared his intention to contest again in 2023, saying his presidential ambition was driven by concern for suffering Nigerians seeking an alternative to the status quo.

“If elected, I will run a government with a dream team of highly competent Nigerians from all parts of our country. Along with strengthened, independent institutions, we will deliver results on a 4-point agenda in four years (4 by 4),” Moghalu said in a statement.

A youth group, Dr Abubakar Bukola Saraki For President 2023, was inaugurated in Daura, Katsina State, in April, to serve as a vehicle for the actualisation of the presidential ambition of former Senate President Bukola Saraki. 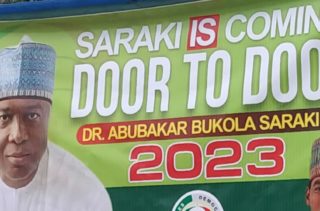 The group, led by Abubakar Nuhu Adam, said Saraki, also a former governor of Kwara State, should become Nigeria’s next president because of what he did and is doing for the youths in the country.

They specifically credited Saraki with the passage of the ‘Not Too Young To Run’ bill by the National Assembly during his time as Senate president.

“We have resolved that we will support someone with the youths at his heart and for us, only Saraki fits into our criteria,” the youths said.

Sokoto State Governor Aminu Tambuwal has not formally declared an intention to contest the presidential election in 2023 but a group – Northern Youths for Tambuwal – is currently campaigning for his emergence as the candidate of the PDP. 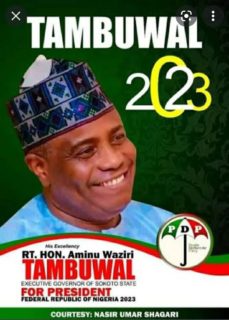 Nigeria needs “a strong, dynamic, viable and a virile leadership that will propel the country to compete with other developed nations” and Tambuwal has the qualities, according to the group’s North-East Coordinator Ibrahim Inuwa.

Former President Goodluck Jonathan was Nigerian president from 2010 to 2015. He was vice president of Nigeria from 2007 to 2010 under the administration of Umaru Musa Yar’Adua but became president when Yar’Adua died in 2010.

Jonathan lost to Buhari of the APC while seeking reelection in 2015.

Buhari’s acceptance as ‘messiah’ in 2015 was largely a result of the widely held perception that then incumbent Goodluck Jonathan was not performing well as president.

Although Jonathan has not personally indicated any interest to run for president in 2023, and so far, no group has come out to actively campaign for him, unlike the others mentioned in this report, it is being speculated that he would emerge the flagbearer of the ruling APC in the coming presidential poll and eventually get another term as president to right the wrongs in the country.

Jonathan is currently a member of the PDP.

The APC appeared to lend credence to the speculations when its spokesman Akpan Udoedehe said Jonathan would be given the chance to succeed Buhari if he joined the party.