WEEKS after the Federal Government said it would decongest the country’s overpopulated prisons, a total of 681 prison inmates in prisons across the country have gained freedom.

A prison stat by the Correctional Services at September 26, revealed 681 inmates have been released since the President changed its name from what it was formerly known for.

President Muhammadu Buhari had on August 14 approved the bill seeking to change the name of Nigerian Prison Services to Nigerian Correctional Service. 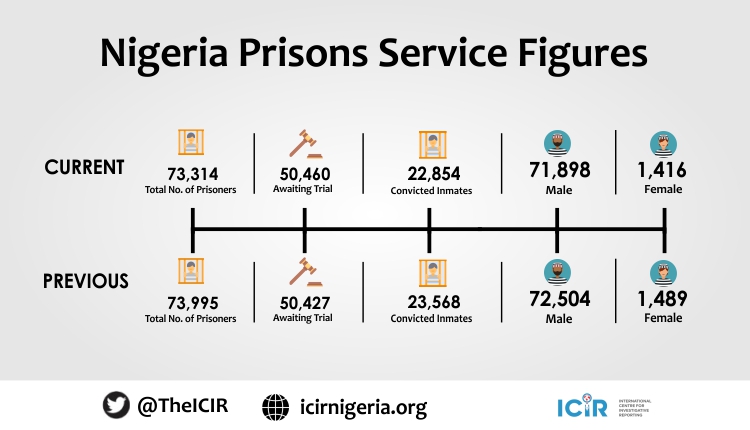 There were 73, 995 inmates in Nigerian prisons as at the time the new name of the service took effect. However, as of September 26, there has been a reduction in the total number of inmates to 73,314.

Meanwhile, the Comptroller of Correctional Service, Francis Enobore in a phone conversation with The ICIR highlighted reasons for the reduction of inmates within the period of time.

According to him, the reduction in the number of inmates in the various prison could result from a state-to-state review of inmates’ case file, by the Presidential Committee on Prison Decongestion and Reformation.

He noted that such review is aimed at ascertaining how grievous the offences of inmates are, stating that once an inmate has no absolute reason being behind bars, such an inmate is released immediately.

Enobore said sometimes judges of state, equally visit custodian centre, to carry out  ‘J-Delivery’ (A chief judge of a state, visiting a particular custodian centre, with other magistrates under his jurisdiction).

“They will go to a particular detention centre, which is a custodian centre and then they review the cases of all the persons that are there,” he explained.

He noted that the visit of the chief judge is an opportunity to carry out an “undistorted review of the work the magistrates under him were doing”.

The comptroller said such frequent visit could also amount to drop in population of the inmates in a particular state or custodian centre.

Other reason could be, that some inmates had completed their jail term; had exhibited good behaviours overtime; had become very productive in their vocational acquisition and certified valuable to his/herself and the society, then such could be released─ Humph Chuks, the Federal Capital Territory (FCT) Correctional Service spokesperson told THE ICIR.

“If there is a decrease in the number of inmates, I think it is a plus to the Service and the society,” Chuks said.

MRA hails European Court ruling on Right to be Forgotten

Moves to set–up agency for repentant insurgents troubling, suspicious — CAN

No hiding place for corrupt persons in Nigeria — Buhari