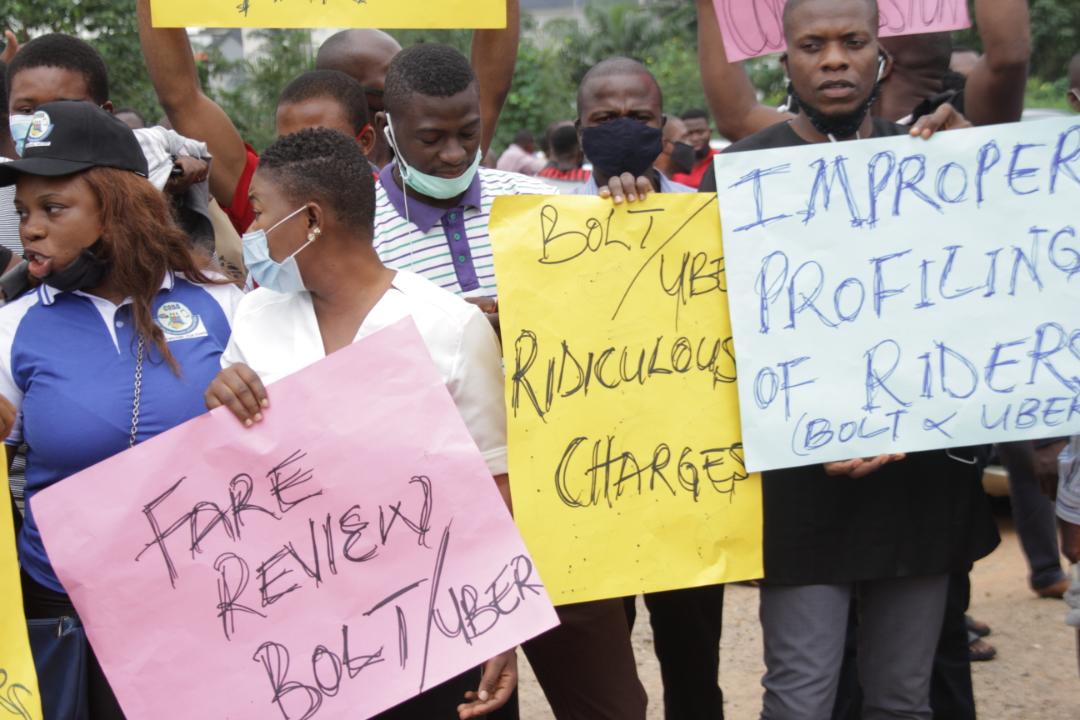 DRIVERS with online car-hailing companies, UBER and BOLT in Abuja, the nation’s capital on Monday  issued a seven-day ultimatum to the hailing companies over low fare charges, gender discrimination, high commission rate and hike in fuel price across the country.

They threatened that if these issues were not looked into and addressed as demanded, they would stay off the road at the expiration of the seven-day ultimatum.

The drivers who gathered at Jabi axis of Abuja to voice out their worries lamented what they described as unfair treatment by the companies.

During the gathering which Emeka Emerole, Chairman of the Online Drivers’ Association in Abuja told The ICIR that UBER and BOLT companies have refused to change their fare charges since 2016 noting that what they charge is low and unprofitable compared to what their colleagues in city like Port Harcourt are being charged.

According to Emerole, UBER and Bolt drivers in Abuja are  charging N45 per kilometre as against N70 per kilometre being charged in cities like Benin, Lagos and Uyo.

He lamented that since 2016, the companies have refused to increase the per kilometre drive despite increase in pump price of fuel and other indices.

“Since they came in 2016 and 2017, the price they have been charging riders since that time has been the price till now, since 2016, we know what has happened in terms of fuel price and cost of things in the market but UBER and BOLT, they’ve refused to increase the price,” Emerole said.

He added that unlike other cities in Nigeria, UBER and BOLT in Abuja charge the lowest fare from their riders.

“If you go to other cities like Port-Harcourt, Enugu, Lagos, Akwa-Ibom, Benin they charge N70 per kilometre but in Abuja here it is N45 per kilometre,” he stated.

Emerole also decried the high rate of commission charged by UBER and BOLT despite the low fare charge from riders.

“We want drivers’ welfare, they come to increase the commission to 25 per cent yet the fare is not increased. Reduce your commission too,” he further said.

Adaph Ayomide, who identified himself as the president of City Online Drivers Association (CODA), said the current situation is unfavourable to the drivers.

“We are here to demand what we believe is right, the situation on the ground is not favourable right now, BOLT and UBER are trying to b ring all riders on board to the detriment of the drivers,” Ayomide said.

He added that the low fare charge could be attributed to the rude behaviours of some drivers because they are not making any profit.

One of the drivers, a woman who identified herself as Vivian said female drivers are being discriminated against by riders and the companies have failed to address it.

“When we get requests, a lot of riders tend to discriminate against us, they just ask are you a lady? then when you say yes, they would say sorry we don’t want a female driver,” Vivian said.

According to her, the drivers are only working to enrich the companies and filling stations.

“You find out that you are enriching UBER, enriching the filling stations, you are giving satisfaction to the riders and at the end, you go home with little or nothing.”

Emmanuel Tenna, President of Abuja City Pilot Forum while speaking to The ICIR said drivers with the E-hailing companies no longer earn like they used to.

“We no longer earn good money, we used to earn a lot of money before but we don’t earn well anymore. Our fares are too cheap. It is a very big shame on us. This cannot continue. We want them to address this issue,” Tenna said.

The drivers said the companies should review the charges upward and include cancellation fee.

“What we are saying is review the price upward, you will go to pick a rider 30 minutes after, you are still waiting for the rider and the next thing is, the rider will cancel, there is no cancellation fee. You burn your fuel to go there, you waste your time and the trip would not be paid for,” Emerelo further stated.

Calling for the profiling of riders, he said, “I don’t understand this, every driver has his or her profile, his data in their system but riders they pick sim cards from the road, write their name as a ghost and they request you, take you to a lonely road, at the end of the day, you and your car would not be found. They can’t give an account of the riders, we want proper profiling of riders and also driver’s welfare.”

Emerole stated that the drivers have concluded that an ultimatum of seven days be given to the companies after which no driver would put on their application and they would embark on a peaceful protest.

An email sent to Bolt was not replied at the time of filing this report.

I am the voice of the holy martyrs, if I perish, I perish -Mailafia says after third DSS invitation