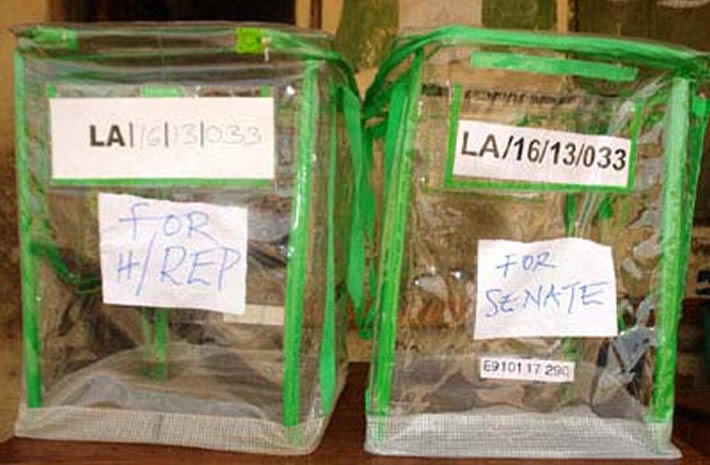 Against the backdrop of statements by the chairman of the Independent National Electoral Commission, INEC, Attahiru Jega, that elections will most likely not hold in violence prone zones, the governments of Borno, Yobe and Adamawa states, have urged that a cue be taken from the Afghanistan
which courageously held the country’s presidential and provincial election last Saturday despite strong threats issued by the Taliban.

A joint statement signed by Ahmad Sajoh, Abdullahi Bego and Isa Gusau on behalf of the three governors said all it takes from the federal government is courage, adding that anything contrary will send the wrong signal to the rest of the world and would amount to accepting defeat.

It said the central government in Afghanistan provided adequate security for the conduct of the polls which reportedly recorded 53 percent voter turn-out and was peaceful in most places.

“Afghanistan and its good people were celebrated worldwide for liberating themselves from the scourge of fear and thereby sending a strong signal that no amount of threat would deny them from choosing their leaders through democratic processes,” the statement said.

The governors stressed that INEC should ensure that no part of Nigeria is excluded from the 2015 elections on account of threats by insurgents and other sundry social miscreants which would amount to succumbing to their doctrine and conceding victory on the part of the country.

They said if INEC decides to go ahead with its initial plan to exclude Adamawa, Yobe and Borno States from the 2015 elections, all the criminal gangs need to do is to extend the attacks to other parts of Nigeria, in order to have more places excluded from future polls.

“This will then imply that crime and criminality will be victorious in suspending constitutional democracy in Nigeria,” it stated.

The statement, therefore, urged INEC to work with the federal government to make adequate security preparations, that will ensure smooth conduct of the election as it happened in Afghanistan which it said has been battling with experiences worse than the combination of Adamawa,Yobe and Borno States.

The governors equally asked that the state of emergency should not be extended further in their states, stressing that “there is absolutely no reason to even contemplate an extension of the State of Emergency in any of the three states”.

According to them, a counter insurgency strategy that lasted one year without achieving the desired result requires a redefinition rather than extension, adding that with continued motivation and intensified deployment of military resources, the crisis will be overcome.

“After all, we had the Joint Military Task Force (JTF) in place in some of States with full military activities prior to the declaration of emergency. We have for many years, also have in place similar JTF in the Niger Delta to combat militancy and kidnapping, we have had same in the southeast to fight armed robbery, we have a Special Task Force in Plateau State combating the crisis in parts of the State without necessarily putting them under emergency rule. Besides, the Nigerian Army has in 2013 created new divisions and brigades in Borno State as permanent military establishments,” they argued.

They, however, saluted the sacrifices of fallen heroes among the military and security agencies and the civilians who died in the crisis and
called on citizens in the affected states and other Nigerians to continue to intensify prayers for the return of peace to the region.