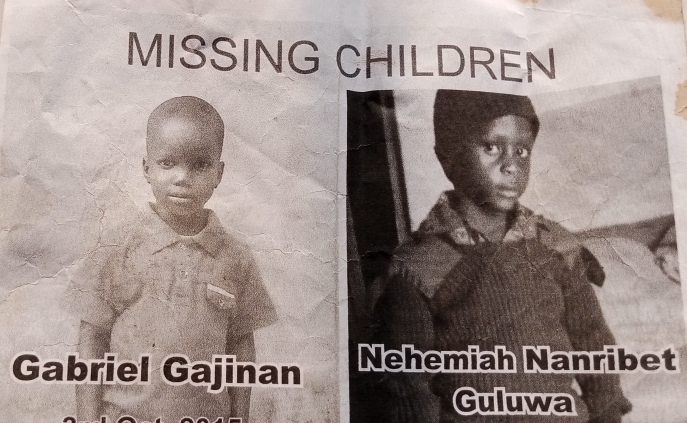 Both children were reportedly kidnapped while playing around their homes.

That was the first and only time any child disappeared in the community.

Efforts by the boy’s parents and the community to locate the children have since been futile.

The parents reported the incident at the Iddo Police Station, near the University of Abuja Permanent Site.

According to Gabriel’s mother, Tabitha Danladi, the Police did all they could, but the children are yet to return home.

Gabriel had not yet started school when he disappeared.

Before his disappearance, he would accompany his mother to the Air Force Girls Comprehensive Secondary School at the Air Force Base, close to the Abuja Airport.

His mother works as a cleaner in the school.

Nehemiah came from Jos during a holiday that year to visit his father. He lived close to his friend’s (Gabriel) house. The two children always played together.

Though there are no facts yet linking them to the boys’ disappearance, investigations by The ICIR uncovered the depth of their operations and their techniques for child trafficking.

According to this newspaper’s findings, the officer, Joy Kelvin, leads the syndicate that comprises the civilian cook, identified as Godiya and some persons allegedly working at the Gombe State Social Welfare Department.

She has since maintained a close relationship with Godiya, who still works with the Abuja Air Force school.

Before the Air Force deployed the officer to Enugu, Gabriel always played with her and Godiya, including other workers in the school.

Godiya and Gabriel’s mother are from Kaduna State, and they live together in Nuwalege.

Godiya is very close to Gabriel’s father the same way she is close to his mother, the mother told our reporter.

Meanwhile, Gabriel’s mother has urged security agencies to help unravel the mystery surrounding the disappearance of her child.

The 28-year-old mother of two is optimistic her son could still be found.

Our reporter could not locate Nehemiah’s parents at the time of filing this report.

The ICIR had on January 7 reported about the officer’s child-trafficking ring.

Similarly, on January 15, the newspaper published a follow-up report on how the National Agency for the Prohibition of Trafficking in Persons (NAPTIP) promised to take up the case.

The reasons for suspicion

In October last year, the Air Force officer sent a pregnant university dropout, Joy Nnam (Ginika), to Godiya to live with her for some months before proceeding to Gombe State to deliver her baby.

Joy was to sell her baby to a waiting buyer in the state.

She could not travel to Gombe as planned to give birth because she delivered on December 27 in Abuja, much earlier than January 24, her Expected Date of Delivery (EDD).

Her host had travelled to Kaduna before she put to bed, leaving her alone in the house.

Feud later ensued among the parties over the sex of the new baby.

The officer, Godiya and the young lady have been  apprehended by the security forces.

Before her arrest, findings by this newspaper showed that Godiya has sold at least one of her children and used the proceeds to buy the house she currently lives in.

The full story on the activities of the syndicate, their arrests and NAPTIP’s response are published here and here.

THE Lagos State Police Command says it has arrested four suspects over the lynching...
Advertisement