The government of Akwa Ibom state has admitted to the findings highlighted by the International Centre for Investigative Reporting  (The ICIR) – funded investigation as the key issue that fuels the prevalence of out-of-school children in the state.

The government admitted that the free and compulsory education policy of the state government is thwarted by illegal charges levied on pupils and students in Akwa Ibom public schools.

TheMail Newspaper, in a two-month-long investigation supported by The International Centre for Investigative Reporting and published in August 2022, had shown that public primary and secondary schools in Akwa Ibom State are levying pupils and students illegally hence the practice has contributed in no little measure to discourage school enrollment in the State.

The report pointed out some of the schools discovered, teachers who admitted to the illegal charges, the subhead used for the charges and the reason teachers give for collection of the illegal fees.

However, in a swift reaction to the report, the government of Akwa Ibom State in a statement released on August 25, 2022, described the investigative report as “misleading, mischievous and politically motivated.”

The government insisted that the free and compulsory education policy of the state is operational thus, school enrollment would not be affected.

But the description made against the investigative report and claims on free education took a fresh twist 10 weeks after when the government of Akwa Ibom State, through the state Commissioner for Education, Idongesit Etiebet, issued another press statement on November 11, 2022, noting that the ministry is now aware of the collection of the illegal levies in Akwa Ibom public schools.

The Commissioner said ” The attention of the Ministry of Education has been drawn to illegal charges levied on pupils and students by Heads of schools in regards to the provision of school uniforms, socks, berets, intervention fees, identity card levy, file jackets for documentation, working tools, etc.”

Etiebet noted that primary and secondary education in Akwa Ibom is free and compulsory hence the collection of all forms of illegal charges is condemned.

The Commissioner stated that henceforth, any head teacher or principal of the school found culpable of the illegal charges will face severe disciplinary action. 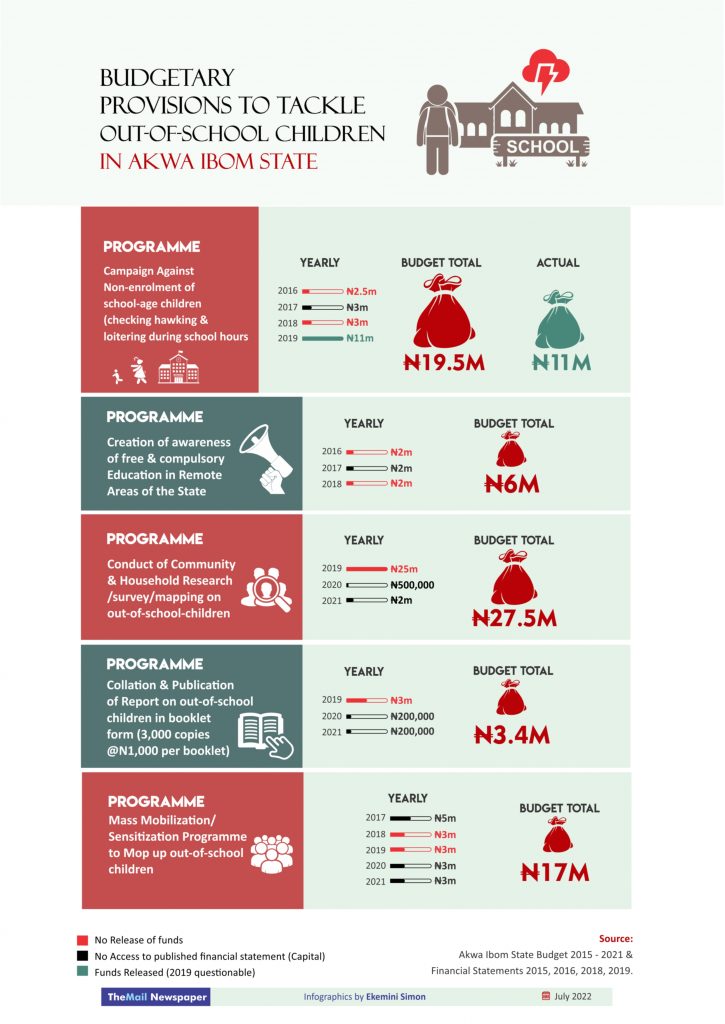 The statement added, “Meanwhile, Parents and Guardians have again been advised to report all illegal charges and irregularities in public schools to the Akwa Ibom State Government through educationmonitoring1@gmail.com or 09035734549 and 07010293974 (WhatsApp and SMS only).

“Government solicits the cooperation of the general public in her drive to provide free, compulsory and qualitative education for the Akwa Ibom child.”

Although the press statement did not link the development directly to our investigative report, our source at the ministry, a senior civil servant who does not want their name on print for fear of victimisation, said the investigative report by TheMail Newspaper had caused the ministry to immediately launch findings on the claims of illegal charges across public schools in the State.

”After your investigative report, the ministry commenced findings to verify the claims of the illegal charges in public schools. We found this to be very true. Teachers were taking advantage of the intervention fee we approved for them to collect other charges, therefore discouraging the very poor to send their wards to school. The ministry has now stopped all charges and we plan to monitor compliance”, the source said.