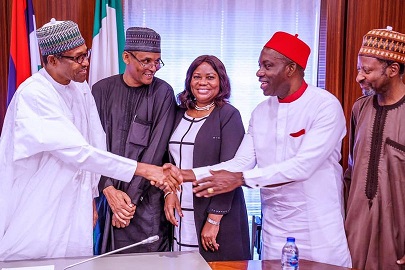 PRESIDENT Muhammadu Buhari has congratulated the candidate of the All Progressives Grand Alliance (APGA) Charles Soludo on his victory in the Anambra State governorship election.

Special Adviser on Media and Publicity to the President Femi Adesina disclosed this in a statement released on Wednesday.

“President Muhammadu Buhari congratulates Prof. Charles Chukwuma Soludo, the candidate of the All Progressives Grand Alliance (APGA) as he emerges winner in the gubernatorial election in Anambra State,” the statement said.

The statement said Buhari also praised security agencies, the Independent National Electoral Commission (INEC) and all other stakeholders who played a part in the success of the election.

“The President praises the security agencies for their determination to ensure that the election went on as smoothly as possible, and the Independent National Electoral Commission (INEC) for the successful conclusion of the exercise despite the initial challenges encountered.”

The statement added that Buhari is ready to work with Soludo when he begins his role as governor of Anambra State.

Buhari, according to the statement, advised the incoming Anambra governor to work with other stakeholders to address the challenges facing the state and the entire South-East region.

The ICIR reported that the APGA candidate Soludo was declared the winner in the Anambra governorship election after the supplementary election in Ihiala Local Government Area on Tuesday.