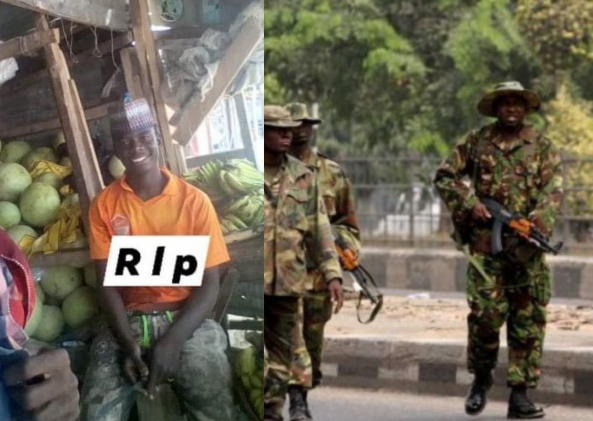 THE Nigerian Army have commenced an investigation into the killing of a man identified as Sanusi by a soldier in Gusau, Zamfara State.

This is contained in a statement signed by Army Spokesperson Mohammed Yerima on Tuesday in Abuja, concerning the reports.

Yerima said the General Officer Commanding (GOC) 8 Division Usman Yusuf had commissioned a panel to unravel the circumstances that led to the death of Sanusi.

Yerima said that the incident was ‘quite regrettable,’ noting that the Nigerian Army condoled with the family of the deceased.

According to him, the alleged perpetrator, once identified, would be subjected to a thorough investigation and if found wanting, be made to face the full wrath of the law in accordance with extant provisions.

He said that the Nigerian Army remained professional and would never condone any act of misconduct by troops against the “very people they are deployed to protect’’ as efforts were ongoing to arrest the yet-to-be-identified perpetrator.

The Army spokesman said no military operational vehicle was set ablaze as claimed in a report surrounding the incident.

“Furthermore, the army wishes to assure the good people of Zamfara State that normalcy has been restored in the general area and remains committed in the discharge of its constitutional responsibilities.

“The army is also working to put in place measures to ensure that such incident never occurs again,’’ Yerima said.

On Tuesday, Sanusi, who sold fruits by the roadside in Gusau, was reportedly shot by a soldier after the deceased demanded the payment of goods bought from him.

According to a former Executive Secretary of the National Human Rights Commission Chidi Odinkalu, some soldiers ate his watermelons and refused to pay and shot him when he demanded for his money.

Zamfara State Police Spokesperson Mohammed Shehu told The ICIR that the command had launched an investigation into the matter.

When asked if the police had been able to nab or identify the culprit, he declined further comments.

Extra-judicial killing and high handedness of men of the Nigerian Army are common. Six days ago, a 45-year old petty trader identified as Chinedu was allegedly shot and killed by a soldier in the Assa community, in Ohaji/Egbema Local Government Area of Imo State.

Imo State Police Public Relations Officer Orlando Ikeokwu, who confirmed the killing, said Chinedu was killed by a stray bullet when the soldiers shot in the air to ward off violent youths.

Ikeokwu added that the Police had opened an investigation into Chinedu’s death.

After ICIR investigations, Imo govt sets up panel to probe…