Abdulrasheed Maina, former Chairman of the Presidential Task Team on Pension Reforms, has been recalled by the federal government and made a director in the Ministry of Interior.

Maina was declared wanted by the EFCC following allegations of corruption and fraud of over N1billion.

According to Premium Times,  Maina was secretly recalled and promoted to the position of Director in charge of Human Resources in the Ministry of Interior.

Maina was an Assistant Director in the ministry before he was appointed in 2010 by former President Goodluck Jonathan to head the pension reform task force.

But in 2012, he was accused of leading a massive pension fraud scheme amounting to more than N100 billion, and in 2013, he was dismissed by the Federal Civil Service Commission following a recommendation by the Office of the Head of Service.

Maina was invited by the Senate Joint Committee on Public Service and Establishment and State and Local Government Administration. Later, an arrest warrant was issued against him by the joint Senate panel.

He ignored the panel and went ahead to sue the Senate and Mohammed Abubakar, the then Inspector-General of Police, The police subsequently declared him wanted and he went into hiding.

In July 2015, Maina was charged by the EFCC alongside Stephen Oronsaye and two others before a Federal High Court on a 24-count charge of procurement fraud and obtaining by false pretence.

Oronsaye and the two other accused appeared in court and pleaded not guilty to the charge, but Maina remained at large.

Reports had it that Maina fled to the United Arab Emirates from where he kept lobbying to win pleasure of the Buhari administration. 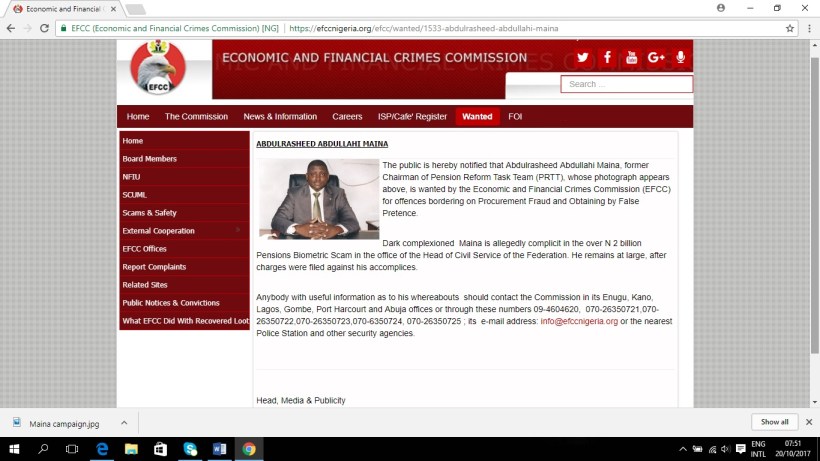 After the emergence of President Muhammadu Buhari in 2015, members of the defunct Presidential Task Team on Pension Reforms offered to work with the administration, saying it would be easier to sanitise the sector as Buhari is known for his anti-corruption stand.

“Two years after, it appears the prayer of the team has been answered by the current administration,” Premium Times reports.

Sources in the know said the plot to recall and reinstate Maina was orchestrated by Abubakar Malami, Minister of Attorney General of the Federation and Minister of Justice, and Abdurahman Dambazzau, Minister of Interior.

Dambazau did not answer repeated calls to his phone seeking clarification on the issue, while Salihu Othman, spokesman of Malami, said he had no idea of his principal’s connection to the case.

A retired director in the Office of the Head of Service who is familiar with the matter said Maina’s recall was a slight on the rule of law.

“He should not have been reinstated. Doesn’t Mr. Maina have a case in court? The rules provide for action to be taken only after the courts have dispensed of the case fully,” the source said pleading anonymity.

Similarly, an official of the EFCC said Maina is still wanted by the commission in relation to the pension scam for which he was arraigned in absentia.

“We are still looking for him. He is a wanted man. He ought to be arraigned with Oronsaye and the rest but he disappeared,” said the official.

Femi Adesina, President Buhari’s Special Assistant on Media and Publicity, said he was unaware of the development.

Chat us on WhatsApp
Advertisement
Previous articleThe anti-corruption war must continue with or without me, says Magu
Next articleThe first day Awolowo called me on phone, I knelt down till the phone fell, says son-in-law