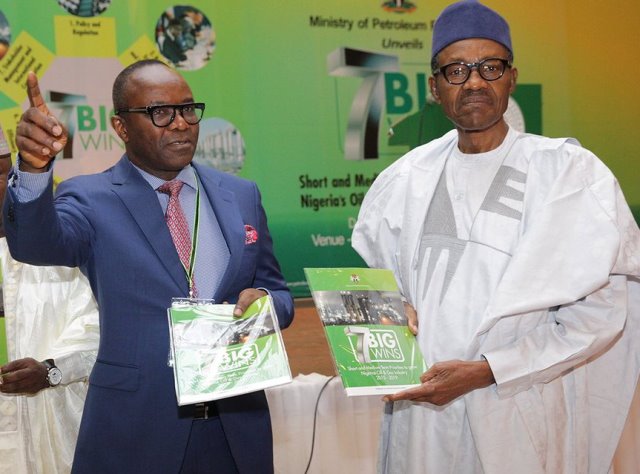 President Muhammadu Buhari will meet with some Niger Delta leaders next week in Abuja in continuation of talks to bring the crisis in the region to an end.

This was made known by the minister of state for petroleum resources on Thursday at the unveiling of the new energy industry roadmap titled “the 7 Big wins” at the State House Conference Centre, Abuja.

“Our target is to ensure zero militancy in the area,” Kachikwu said.

“This planned meeting shows the level of interest the president has to ensure peace in the area.”

Delivering his speech at the event, President Buhari stated that though the golden era of high oil prices have passed, Oil and Gas resources still remain the most immediate and practical keys out of our present economic crisis, as it still remains the “critical enabler for the successful implementation of our budget as well as the source of funds for laying a strong foundation for a new and more diversified economy.”

“As important as it is to ensure that Agriculture, Solid minerals and other critical sectors of the economy are supported to grow and contribute more to the nation’s economy, we still need a virile and efficient oil and gas industry to take care of our foreign exchange requirements,” the president stated.

He added that “the task before the Ministry of Petroleum Resources is to maximize the potentials and opportunities across the whole range of the Oil and Gas industry to stimulate our economy in spite of the current challenges.”

He said: “There is also a dire need to instill a new culture of transparency and efficiency in the industry, streamline operations along best practices by championing and implementing strategic reforms at every layer of the industry.“If we are able to plug the leakages, and tighten loose systems that characterized this industry in the days of high oil prices, we are convinced that we can do even more with the little that we are getting at the moment than we did even in the time of plenty,” he added.

President Buhari acknowledged that recent developments in the Niger Delta had temporarily limited oil production, but reassured that “whatever challenges we are currently facing in the region, our resolve and capability to work with all stakeholders to restore normalcy will guarantee success.”

Kachikwu, in his speech, stated that the petroleum ministry plans to get the National Assembly to pass the long-delayed Petroleum Industry Bill by December.

The bill covers everything, including an overhaul of the Nigerian National Petroleum Corporation, NNPC, as well as taxes on upstream projects.

The minister said Nigeria was also considering asset sales and wanted to improve the investment climate and enable development of the nation’s gas assets.

He said: “The seven elements of the plan are: solving the Niger Delta development and security problem, policy and regulations reforms, business environment and investment drive, transparency and efficiency, stakeholders management and international coordination, gas revolution and finally refineries and local production capacity.”

Kachikwu told the event that Nigeria’s oil output stood at 1.8 million barrels a day, compared with the 1.9 million bpd the Petroleum Ministry announced earlier this week.

He added, however, that the government hoped to get back to 2.2 million bpd next year – the level seen at the start of 2016.

“We have a capacity to produce 3 million,” he said.