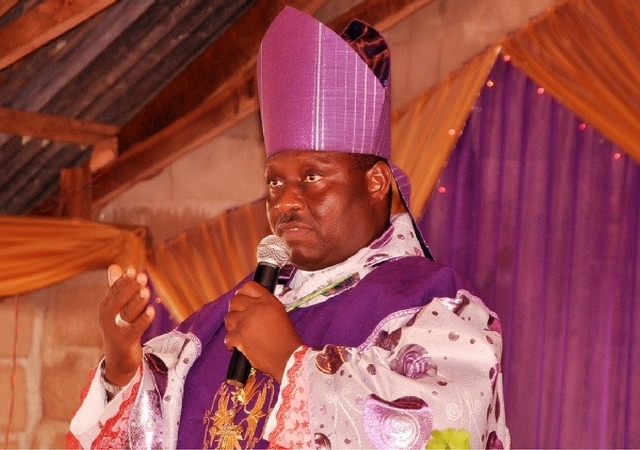 CHARLES Hammawa, the Catholic Bishop of Jalingo Diocese, says the presidency of Muhammadu Buhari lacks legitimacy and sincerity, else it would have done more to ensure the protection of life and property of citizens.

Bishop Hammawa said this during a requiem mass at Our Lady Queen of Peace Cathedral, Jalingo, Taraba State, in memory of the two priests who were killed by suspected herdsmen last month.

The priests, Joseph Gor and Felix Tyolaha, were murdered in cold blood alongside 17 other parishioners of St. Ignatius Catholic Church, Mbalom in Gwer East Local Government Area of Benue State.

The deceased victims were buried on Tuesday in Benue State, and masses were said in all the Catholic Churches across Nigeria for the repose of their souls.

In his sermon, Bishop Hammawa said the silence of people in power in the face of continued violent killings across the country was “an act of betrayal, an act of blasphemy against God”.

“It’s a blasphemy for our elected people to allow the killings of human beings as if their lives did not matter. The federal government must rise up to protect all citizens without bias, for every human life matter and no life is more important than the other,” Hammawa said.

“The present government of President Muhammadu Buhari lack legitimacy and sincerity of purpose and people should not support such government that lacks legitimacy.

“If he can no longer protect the lives and property of citizens which is a primary constitutional responsibility,  he should step aside.

“By all indications this government is failing and that is why I am calling on the people not to support a failing government if he cannot change his ways,” he said.

Hammawa, however, urged Christians to remain peaceful and not resort to reprisal attacks, but to defend themselves where they could.

Vice President Yemi Osinbajo was at Benue State on Tuesday to attend the burial mass of the priests. It is the third mass burial being conducted by the Benue State government for victims of herdsmen killings  in 2018.

The first was on January 11, for more than 80 persons killed by herdsmen on New Year Day. The second mass burial was scheduled for March 9, for another 24 Benue citizens killed by herdsmen. It was later called off after President Buhari announced he would be visiting the State, but a quiet funeral ceremony was held for the victims.

Speaking at the funeral service, Osinbajo described the killings as satanic and evil, assuring the people that “this evil will be defeated and ended”.

Osinbajo was accompanied on the trip by Rotimi Amaechi, Minister of Transportation, and Geoffrey Onyeama, Minister of foreign affairs.

We found 11 soldiers dead, say Nigerian Army in reaction to…