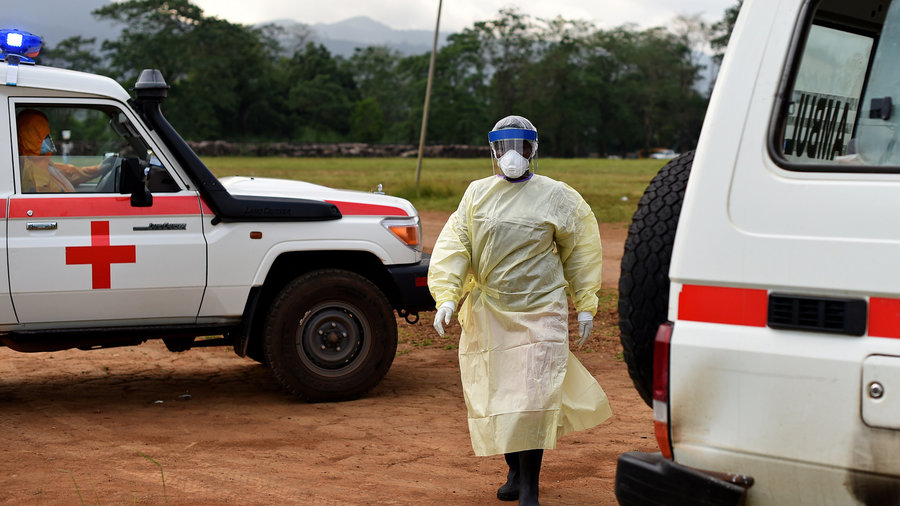 
Contrary to the information given to the public by Isaac Adewole, the Minister of Health, that Nigeria is prepared to contain any outbreak of the Ebola virus, investigations by ICIR have revealed otherwise.

Following the re-emergence of Ebola in a northern village in the Democratic Republic of Congo in May, fears have spread across Africa on the possibility of another Ebola epidemic.

The last outbreak in West Africa killed more than 11,000 people, with the largest casualties recorded in Liberia. The virus was introduced to Nigeria by Patrick Sawyer, a Liberian-American, who came in on July 20, 2014 through the Murtala Muhammed International Airport, Ikeja.

Sawyer died five days later but he had set off a chain of transmission that infected a total of 19 people, out of whom seven died.

The latest outbreak of the disease has reportedly killed three persons in the DR Congo and health authorities in the country are trying to track down 125 others who may have been exposed to the virus.

In his reaction to the fresh outbreak of Ebola in the DR Congo, Adewole had said the country was prepared to contain any outbreak, stressing that screening and surveillance were ongoing at all entry ports in the country.

Adewole also disclosed that there were designated health facilities close to entry ports in Lagos and Abuja.

While our reporter confirmed the installation of Infrared Thermal Imagining Scanners at the Murtala Muhammed Airport, Ikeja and the Nnamdi Azikiwe International Airport Abuja, for the screening of passengers entering and leaving the country, we found no evidence of preparations to treat victims or contain an outbreak.

One sophisticated thermal scanner each has been installed at the departure and arrival foyers of the Nnamdi Azikiwe Airport to gauge passengers’ temperature. If a passenger’s temperature is above 37.5 °C, he or she is asked to step aside and taken into the Port Health office for further checks to determine whether it is a case of infectious disease, including Meningitis and Ebola.

According to a senior doctor at the Port Health office at the Nnamdi Azikiwe International Airport, Abuja, if there is a suspected case of Ebola, the World Health Organisation (WHO) is notified while the patient is isolated and taken to a designated facility.

Asked where the designated facility for Ebola is located in Abuja, he called a staff to find out. The staff said the facility was located in Zuba.

Zuba Cottage Hospital is located along Gwagwalada Road, less than 10 kilometres from the airport. It must have been chosen for its proximity to the airport.

But when our reporter visited the hospital, there was no indication of its designation as treatment centre for Ebola patients or anyone suffering from a communicable disease.

It is a two-storeyed facility built since 2009 but recently renovated for use as a General Hospital for Zuba and surrounding communities. There are five wards in the hospital, each with six bed spaces for patients, but there were no patients in the wards when our reporter visited on Thursday June 8.

Only the accident section seemed functional, as nurses were seen going in and out of it.

A senior nurse told ICIR that the hospital had not been informed that it could be used for isolation and treatment of Ebola patients.

“We are not aware of that. But you cannot even bring an Ebola patient to a hospital like this that serves as a General Hospital,” she said.

“It is not built to admit such patients, as the wards are not well-ventilated enough to keep a patient with an infectious disease, not to talk of the likes of Ebola.This is the only hospital in the whole of Zuba and it serves Zuba and about four or five other communities surrounding it. If you bring Ebola patient here where will you take the other patients to?”

Our reporter gathered that the hospital has no facility, including seats, for patients and has less than 10 nurses who were deployed from other hospitals just last month. Due to lack of personnel and facility, the hospital is unable to admit patients.

Officials of the FCT Health Secretariat and the Federal Ministry of Health were said to have visited the hospital last month and told the management that the facility would be used for the treatment of “sick passengers” from the airport. The source said there was no mention of Ebola in the conversations.

It was initially speculated that a section of the Kuje General Hospital would be used to isolate patients in the event of an Ebola outbreak, but leaders of the community were said to have opposed the move. This is probably why the issue of Ebola did not come up in the discussion with the management of Zuba hospital.

Clearly, nearly four years after the outbreak of Ebola in Nigeria, and several weeks after another outbreak in the DR Congo, authorities in the country are yet to have facilities and personnel in the right places to contain any fresh outbreak.

In August 2014, Bala Muhammed, the then FCT Minister, stated at a public function that the General Hospital, Kuje, in Kuje Area Council, had been designated as a treatment Centre for cases of the Ebola virus infection. He said the hospital was chosen because it would be easy for the people to access and that a ward would be isolated at the hospital for quarantine and surveillance of potential cases.

He added that adequate infrastructure and equipment would be put in place to manage affected persons and guard against the spread of the virus.  But after the community kicked against the decision, nothing was done to have an alternative facility.

In Lagos, Nigeria’s commercial capital, the story is the same. Signs at the Murtala Muhammed International Airport, Lagos, show little seriousness on the part of the Nigerian authorities, to tackle the disease.

There is no attempt to sensitise passengers at the airport about Ebola. There are no flyers/posters at the departure and arrival halls of the airport, or jingles warning passengers about the danger posed by the disease.

On May 31 when our reporter visited the airport, there was no notice in the departure lobby for intending travellers to be wary of the virus, neither was there at the arrival section. It is only in two of four toilets at the departure hall that a notice titled ‘Integrated Response to Public Health Emergency in Nigeria: Quick Facts About Ebola Virus Disease’ is seen on the wall.

At the arrival hall, in the male toilet tagged 0009, opposite Maverick Business Services, the hand dryer had broken down and what currently serves as hand dryer is a giant fan. The Integrated Response to Public Health Emergency in Nigeria notice about Ebola is missing there. Overall, in the five toilets at the airport visited by the reporter, only in two were toilet papers available while some of the facilities in most of the toilets were in bad shape.

A staff at the Port Health Services a the Lagos airport, who pleaded anonymity, said the agency, which operates under the Federal Ministry of Health, has a team of environmental and medical officials who screen passengers at the airport and that so far, no Ebola virus has been detected. She said the health centre at the airport has the capacity to handle any health challenge arising from Ebola.

Our reporter spoke to two different returnees to the country — a man and woman. While the woman said she was subjected to Ebola test on arrival at the Murtala Muhammad Airport, the man said he did not undergo any such test. The man’s view aligns with that of Chris Ajaero, a Lagos-based journalist who returned from a nine-day trip abroad on Sunday, May 28, 2017. Asked whether he was subjected to Ebola test before and after returning to Nigeria, Ajaero said no.

“I didn’t fill any form at the Murtala Muhammed Airport Lagos over Ebola when I travelled from Nigeria to Ahmedabad, India, recently to cover the annual meetings of the African Development Bank,” he said.

“I was also not subjected to any screening or medical test by the medical personal throughout the journey. On my way back to Nigeria, (in the plane) I was given a form to fill pertaining to whether I had contact with anyone with such health challenges and I completed the form but on arrival at the airport, there was no medical personnel to collect it and no official requested for it.”

Interestingly, there is evidence of awareness about Ebola at the Nigerian Ports Authority, Lagos Port Complex, Apapa right from the gate where a banner informs visitors about the deadly virus. A notice on doors at a medical unit at the administrative building in the complex directs enquiries about the disease to a medical staff while flyers about the virus are available at the Port Health Services unit visited by the reporter.

A medical staff told our reporter that a meeting was called on June 1, more than two weeks after reported Ebola outbreak in DR Congo, to discuss the Ebola threat and how to respond.

Agnes Olapade, the Chief Nursing Officer, Port Health Services, at the complex, also said there was a meeting aimed at raising awareness about Ebola.

“Last week Friday, we had a seminar to make people aware that though Ebola is not in Nigeria, it poses danger. A handbill was shared to people that came for the seminar. We gave health talk on it and showed people how to go about personal hygiene.“

In line with that, Olapade said people coming and leaving the country are subjected to test, and that there is collaboration between the various government agencies at the port to ensure Nigeria is free from Ebola. She advised Nigerians to ensure that they maintain high personal hygiene, as a way to keep the disease at bay.

Ebola is one of the world’s most fatal and rare diseases yet to have any reliable cure.

If there is an Ebola outbreak in Nigeria today, it is not unreasonable to believe that the fire-brigade approach of 2014, which encouraged corruption, may be replayed. At the peak of the Ebola crisis on August 8, 2014, the president, in a press release signed by Reuban Abati, announced the release of N1.9 billion as a Special Intervention Fund for the management of Ebola.

The fund was for the strengthening of efforts to contain the virus such as the establishment of additional isolation centres, case management, contact tracing, deployment of additional personnel, screening at borders, and the procurement of required items and facilities.

But nothing of such happened as the then Minister of Health, Onyebuchi Chukwu, denied that the fund was for Ebola management. He said the money approved by the president was for the federal ministry of health to buy operational vehicles, drugs and other items.