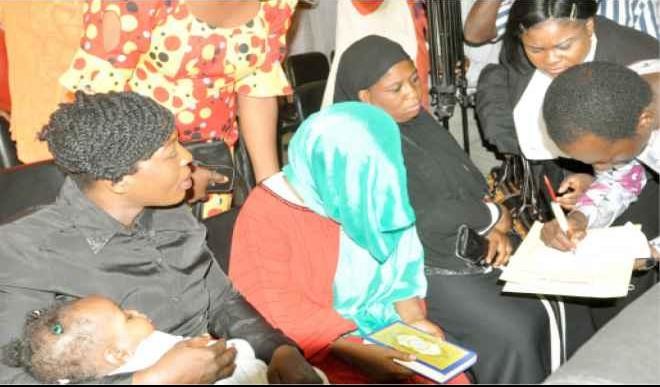 A Federal Capital Territory (FCT) High Court sitting in Jabi, Abuja, has ordered that Maryam Sanda, who allegedly killed her husband Bilyamin Bello, should be returned to Suleja Prison pending her re-arraignment next Thursday.

This was after the court refused an oral application for bail made on the accused’s behalf by Joseph Daudu, her new lawyer, when the matter was brought up for hearing on Thursday.

Maryam has been remanded at the prison since November 24, after pleading not guilty to the charge before the court.

The Police alleged that Maryam had caused the death of Bello “by stabbing him on the chest with a broken bottle which eventually led to his death and you did with the knowledge that your act is likely to cause his death”.

At the resumed hearing, James Idachaba, Police Prosecutor, informed the court  that an amended charge had been filed before the court where Maryam’s mother, Maimuna Aliyu, has been added as defendant together with two others.

Idachaba, a Chief Superintendent of Police (CSP), said all efforts to serve the charge on Maimuna and the others have proved abortive.

He asked the court to adjourn the matter to Thursday, December 14 to enable the Police bring all the defendants to court so they can take their pleas together.

After this, Daudu, a former President of the Nigerian Bar Association (NBA), asked the court to listen to the bail application filed on Maryam’s behalf.

But Idachaba urged the court to also adjourn the bail application to December 14 after new pleas must have been taken.

The trial judge, Justice Yusuf Halilu, ruled in favour of the Prosecutor and said the bail would be taken after the re-arraignment.

Again, Daudu pleaded with the judge, this time orally, to release Maryam on bail pending the Thursday. He said the prison conditions are unwholesome for Maryam’s six-month-old baby.

“It is unfortunate that a life has been lost already, but we should not take more lives,” the senior lawyer pleaded.

After another objection by the Police Prosecutor, Justice Halilu, held that he was not disposed to granting the oral bail application since issues had been joined on the formal application for bail.

“The defendant in the main time shall be returned to the prisons pending Thursday, December 14,” the judge held.

Earlier, the judge had ordered that Maryam’s daughter in the custody of a relative be taken out of court after the baby’s persistent crying.

The baby continued crying outside the court room throughout the court proceedings.

The court room was filled to capacity, with as many more people standing both inside and outside.

Chat us on WhatsApp
Advertisement
Previous articleOkorocha and the limits of clowning
Next articleFLASHBACK: How DSS raided Justice Ademola’s residence in 2016