WITH a total of 546 deaths resulting from 351 conflicts, Cross River, Delta, Edo and Rivers emerged as the most violent states in the Niger Delta region in 2018, the Niger Delta Annual Conflict Report has revealed.

The report examined the trends and patterns of conflict risk and violence, identified key interrelated drivers and pressures on peace and stability at the regional, state and local levels.

It was released by the Foundation for Partnership Initiative in the Niger Delta (PIND).

According to the report, the Niger Delta peace and conflict landscape underwent significant changes in 2018. 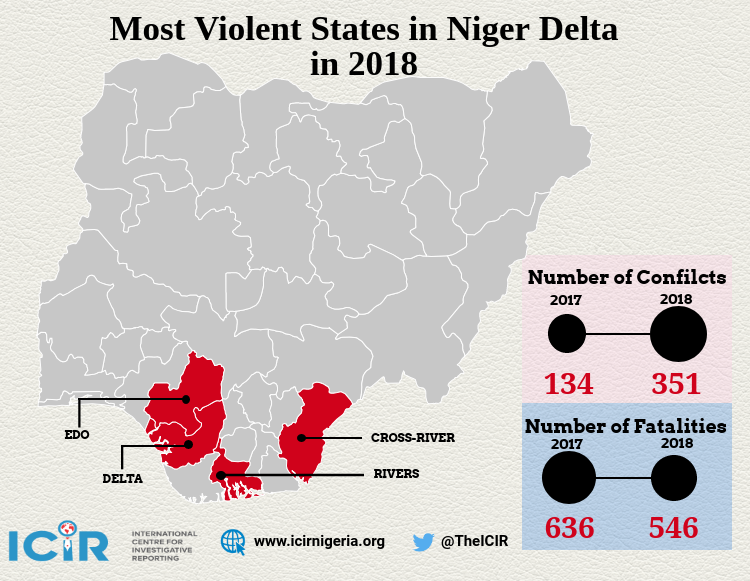 In the overall, PIND said there was a shift in the trends and patterns of conflict risk and violence in the Niger Delta in 2018, compared to the previous year.

It emphasised that there was a decrease in conflict and lethal violence in the region in 2018, compared to the trend in 2017 noting that criminality and communal violence decreased, while gang violence and militancy increased during the year.

“Gang violence and communal conflict were the most lethal types of violence in 2018, as measured by fatalities per incident,” PIND said in the report, noting that gang violence was widespread during the year.

“According to data on the average, every incident of gang violence and inter-communal conflict resulted in at least two fatalities.”

This, it said, was closely followed by militancy/counter-insurgency with an average of 1.8 fatalities per incident.

“Overall, the most reported incidents of violence related to criminality (including piracy, abductions, robberies, and killing for ritualistic purposes – but excluding cultist supremacy battles), with 546 fatalities in 351 incidents,”  the report revealed.

The report also pointed out that gang/cultist supremacy battles was the third highest conflict issue in the region during the period, resulting in in 174 fatalities in 66 reported incidents.

“Gang violence was reported in all the states in the region, but it was more widespread in Rivers, Delta, Bayelsa, and Edo state,” it said.

Besides that, it added that militancy also caused about 70 fatalities in 2018, especially in Bayelsa, Akwa Ibom and Delta state, driven mainly by criminality, attacks by militants and counter-insurgency operations of security forces.

“The hot spots of conflict in the region remained largely unchanged in 2018, compared to 2017. According to data (www.p4p-nigerdelta.org), the most violent states during the period, based on the number of reported conflict fatalities, were Rivers, Delta, Cross River, and Edo, respectively.”

It explained that the month of May with a total of 169 fatalities was the most violent month during the year.

“In one incident in May, for instance, 30 fishermen were reportedly killed during a clash over a boundary dispute between Oku Iboku community in Itu Local Government Area, Akwa Ibom state and a community in neighbouring Cross River state,” it said.

“Separately, in May, 10 people were reportedly killed during clashes over territorial control between the Greenlanders and the Bobos cult groups in Yenagoa, the Bayelsa State capital.”