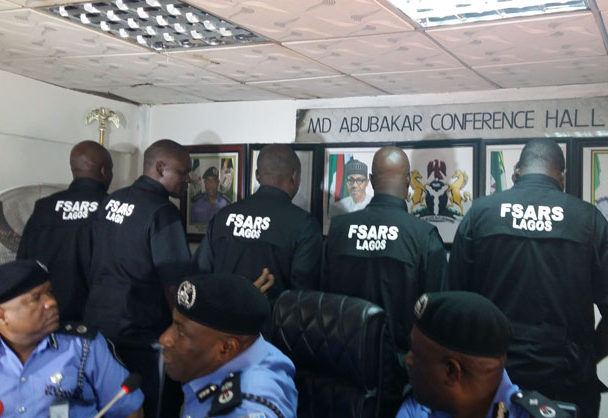 President Muhammadu Buhari, he disclosed, “has already ordered a review of the formation of SARS” to make it more responsible. That same Wednesday, however, 28-year-old Eyo Solomon (not his real name) had one of the bitterest encounters of his life at the Ikot Akpan Abia SARS office, Akwa Ibom.

The government promise may never remedy the loss of N60,000, which according to him, he paid the SARS before securing his freedom, or erase  memories of torture he had undergone.

Returning home with two of his friends at 10pm on Tuesday, he was accosted by SARS operatives, including a police corporal who goes by the name John. They arrested and detained him at their office in Police Headquarters at Ikot Akpan Abia, Uyo where they demanded a sum of N100,000. Since he could not afford to ‘bail’ himself that night, he was left behind the counter to spend the night together with his friends.

The next morning, one of the officers approached him and advised him to negotiate because “his boss will come and the case might change” soon. He later reduced the charges to N30,000 which also Solomon could not pay. Realizing that the boys were not prepared to pay, the police officer transferred them to the cell.

In an interview with the ICIR, Solomon revealed the terrible condition he found fellow detainees at the station, and  how the condition led to the death of at least one of them.  Solomon said SARS  violates human rights of Nigerians, especially those in their custody, with impunity.

Out of nearly twenty-two persons he met in the cell, the person that really caught Solomon’s attention, he told the ICIR, was a boy called Solo. He was not sure what his offence was, but he had gunshot wounds on his right leg, which was already “decaying”. Yet, he was abandoned not only without medical care of any sort but also without food and water.

“The boys in the cell told us that they [the SARS operatives] shot him three times in the leg,” he said. “There were about six of them that were brought in, Solo and his gang members. They said the SARS operatives instructed them not to give him food or water.”

“When I asked what he did, someone said ‘this one na tough criminal’ and they were instructed not to give him food nor water and that anyone who is caught assisting him would get in trouble. No human beings deserves such treatment, no matter his crime.

“I just pray…I don’t even know if he is alive as we are speaking now, because he was 70 percent gone. The guy is just a fighter for him to have still been alive at the time.”

However, by far the most harrowing experience for Solomon in the hours he spent at the Ikot Akpan Abia SARS office was the death and cruel disposal of one of the inmates—Solo’s brother.

“Before we entered the cell that morning, his brother died there,” he recalled. “And the craziest part of the experience was that a friend, who has a huge frame and who was with me, was called out three minutes after we entered the cell.”

“I was wondering why they were giving him preferential treatment since we came in together, only for them to take him outside and order him to pick up the corpse of Solo’s brother. They took it to one area beside the police station, dumped the corpse there, and covered it with a plank or something like that.”

50 NAIRA GARRI IS ALL THE DAY’S MEAL

For persons unlucky enough to find themselves under SARS detention however, the situation is worse and the tragedy quadruple. All they get is N50 worth of garri, and so they have no choice but to devise means of making the most out of what is extremely limited resources.

“And, of course, the conditions they are in is bad in the cell,” he recalled. “They don’t feed them.”

He continued: “When we entered there in the morning, they came and counted the number of people in the cell. I do not know what the count was. And then they brought a custard container with wraps of dry garri. Each person is entitled to 50 naira garri for your food with nothing attached to it, for the entire day. For the entire day!

“That is what they eat. If you see how these boys cherish … if you see how dear this garri is to them… oh my God! You will see them soaking garri in the morning and keeping it till afternoon so that it will swell and they will have enough to last them the day.”

Solomon further told the ICIR that most of the detainees in the cell were youths. The oldest, he said, must have been no older than thirty years, and the rest are young boys between the age of 21 and 25. But then, he also knows of a 12-year-old boy whom he noticed spent the night between Tuesday and Wednesday in detention.

“He was put in the cell at night,” he said. “Because when we got there he wasn’t there.”

“In the morning, they brought him out of the cell and put him with us at the counter. We asked what he did, he was giving us bogus stories. But he was a kid, and he slept in the cell that night.”

Solomon also spoke to a few other detainees, and he realised “most of them did not do anything serious, and they have been there for two to three months”. While one of them was detained because he continued to ask for what was rightfully his, the second was not released for failing to ‘bail’ himself—though his case was already closed.

According to him: “One guy told me that he was actually locked up because of his IPO. When he was arrested the first time, he was arrested alongside his motorcycle and properties. When they brought him to the station, the SARS operatives sold his motorcycle without his permission and instead gave him one old scrap, then gave him N5000 to repair it.

“When he could not fix it, he started complaining, and later the man increased the money… At that particular point, he said he has papers to prove ownership and to prove that the policeman sold his bike. And he said he does not even want to go out until they provide a motorcycle for him.”

“Another guy was locked up by his boss, but the case is actually over. The boss has come to close the case, and ordered the SARS operatives to release the guy. But they are still keeping him simply because he does not have N50,000 to bail himself.”

Not only is the cell in which Solomon, his friends and about twenty others were kept very small, it was essentially also a living hell. It is exceedingly dirty and lacks any kind of furniture—only concrete slabs. Solomon also remembered there is a small passage and toilet, but not without great shortcomings.

“There is no ventilation,” he noted. “The only window [in the cell] is very small. The cell I was put has just one window, the shape of louvers. They used cement to shape it, and even if air comes in, it doesn’t go down to the people. They are shaped in such a way the air is directed upward.

“The detainees have injuries all over. The cell is dirty.The toilet is dirty. The water they use is dirty. The boys in the cells have skin infections because I saw a lot of scratching. There are bed bugs everywhere. Even in the police station where the SARS operatives are, on the desks and office tables, I saw bed bugs; so you can imagine what goes on in the cells.”

Again, images of Solo flashed through his mind: “The stench from Solo’s gunshot wound…like…oh my God… the water oozing from…mehn! I don’t even know how to describe it. It was terrible. I actually wanted to let it go, but mehn! my conscience, I could not.”

“I am speaking out because of what I saw there and for those helpless young boys suffering in detention,” he concluded.

SILENCE FROM THE NIGERIAN POLICE

Various attempts by the ICIR to get a reaction from the Nigerian Police proved abortive. The line of Akwa Ibom Commissioner of Police, Adeyemi Ogunjemilusi, was switched off, and his Deputy neither answered calls nor responded to a text sent.

Likewise, Haliru Gwandu Abubakar, Commissioner of Police in charge of the Special Anti-Robbery Squad, and Corporal John, one of the SARS operatives who arrested Eyo Solomon, neither answered calls placed to them nor replied texts.

PS: This report was supported by Citizen Gavel, an NGO that connects indigent Nigerians to free legal aid lawyers, tracks court cases, and accelerates justice delivery using technology. Gavel has written to the National Human Rights Commission “on the need to urgently investigate and visit” the detention facility and possibly rescue Solo, the injured inmate.

THE President of the World Bank Group, David Malpass, has warned of global recession...
Advertisement

Chat us on WhatsApp
Advertisement
Previous articleCourt orders EFCC to unfreeze Nyako’s account, property
Next articleBuhari, Osinbajo, and how not to sympathize with grieving people