EVENTS at ThisDay newspapers have taken a dramatic turn as the sack of Christopher Isiguzo, one of the presidential aspirants at the Nigeria Union of Journalists (NUJ) caught up in a forgery scandal, has been reversed.

The ICIR gathered the reversal took place on the night of Tuesday, hours after news broke of Isiguzo’s dismissal.

In an email sent to Isiguzo by Joseph Ushigiale, the paper’s Managing Editor, at 10:37pm, the former was notified that the decision to terminate his appointment was rescinded “for now” based on “Chairman’s directive” — referring to Nduka Obaigbena, founder and chairman of ThisDay newspaper.

“Dear Mr. Isinguzo,” it read. “I refer to my earlier email to you on the above subject matter and wish to convey to you Chairman’s directive rescinding the decision terminating your appointment and to maintain the status quo ante for now. Thanks.” 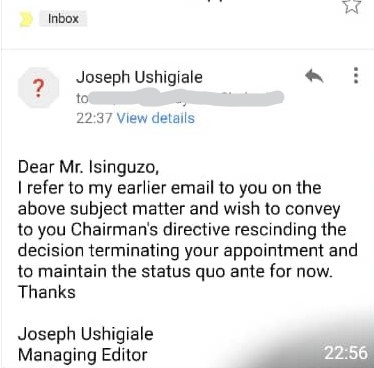 ThisDay originally decided to sack Isiguzo after a review of his credentials revealed irreconcilable discrepancies, Ushigiale had told The ICIR.

He said, according to his 2006 application to the organisation, he has an an OND and HND from the Federal Polytechnic, Oko, and a diploma from Hyles-Anderson College, all in 1998, “which is not possible”.

The ICIR has reported other irregularities in the forged documents, including that another institution’s stamp was used on his Nigerian HND statement of result and “2nd class” was written on his American diploma even though the United States instead uses Latin honours.

The Chancellor of Hyles-Anderson College, John Wilkerson, confirmed that the document was not issued by them and “neither do the names upon it represent any officiants or graduates of our college.”

Meanwhile, efforts to reach Ushigiale for an explanation on why the earlier decision was swiftly upturned proved unsuccessful as his phone number was not available.