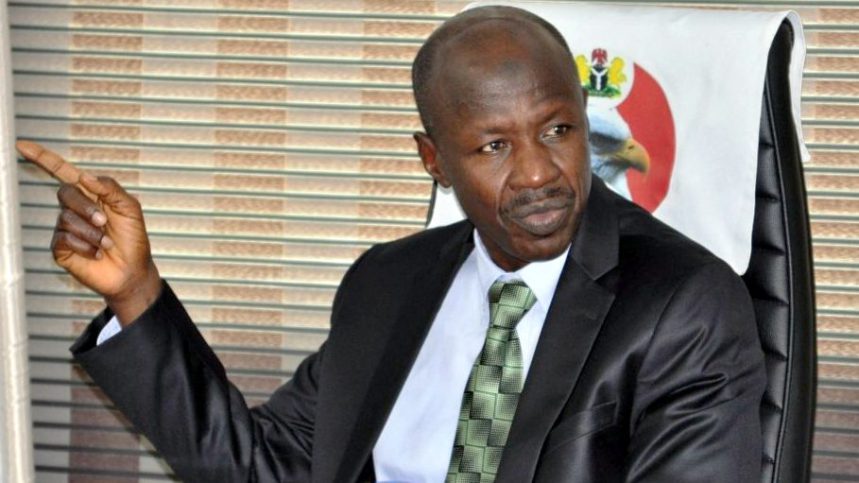 CONTRARY to reports that Ibrahim Magu, acting Chairman of the Economic and Financial Crimes Commission (EFCC) was arrested on Monday by operatives of Department of State Services (DSS), Peter Afunanya, spokesperson of the secret police said Magu was not arrested by the services.

” The Department of State Services (DSS) wishes to inform the public that it did not arrest Ibrahim MAGU, Acting Chairman of the Economic and Financial Crimes Commission (EFCC) as has been reported by sections of the media, Afunanya said in a short press release sent to The ICIR.

In the press release titled ‘MAGU, NOT ARRESTED BY DSS’, Afunaya explained that “the Service, has since, today, 6th July, 2020, been inundated with enquiries over the alleged arrest.”

There were reports Monday afternoon that Magu was arrested by the DSS.

Dele Oyewale, spokesperson of EFCC was not immediately available to confirm this as his mobile phone was switched off at the time of filing this report.

However, a top official of the agency who did not want to be named said Magu was indeed arrested.

Magu has been under scrutiny since a memo by Abubakar Malami, the Attorney General of the Federation and Minister of Justice to President Muhammadu Buhari surfaced last month alleging insubordination and corruption against him.

One of such allegations, according to the memo was that the EFCC boss disclosed a total recovery of N504 billion but lodged N543 billion in the Recovery Account with the Central Bank of Nigeria (CBN).

The other one is that most of the recovered assets by the EFCC were allegedly sold by Magu without the knowledge of anyone.

Controversy has marked Magu’s  tenure  as the acting EFCC chairman following the refusal of the National Assembly  to confirm his appointment as the substantive chairman of the Commission.

The National Assembly acted on a report by the DSS  in which he was found guilty of “action prejudicial to state security, withholding of EFCC files, sabotage, unauthorised removal of EFCC files and acts unbecoming of a Police officer.”

Meanwhile, Kola Ologbondiyan, National Publicity Secretary of the People Democratic Party (PDP) in a statement said the memo on Magu has exposed the hypocrisy, abysmal corruption, and deception that exists within the Buhari’s administration.

PDP called on the acting EFCC chairman to immediately step aside and submit himself for an independent investigation in order to clear his name.

Pieces of jewellery seized from Diezani worth N14.460b -EFCC