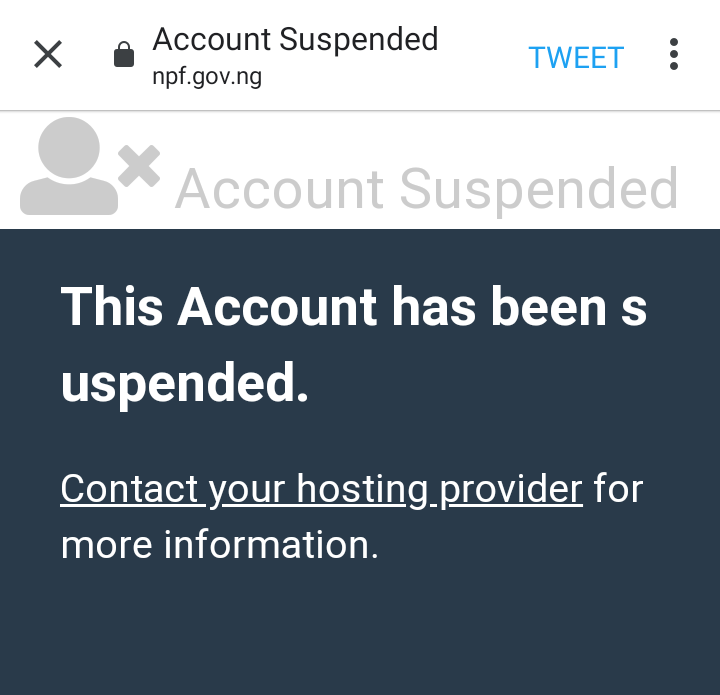 SINCE the cyber attack on the official website of the Nigeria Police Force (NPF)  a week ago, the platform has remained offline, causing the Police to disseminate information to the public only through its social media accounts.

When The ICIR visited the website at 9:02 am, the message displayed on the website stated the webpage was temporarily inaccessible due to network errors or attacks.

“You cannot visit npf.gov.ng right now because its certificate has been revoked. Network errors and attacks are usually temporary, so this page will probably work later,” it read.

On October 15, an international hacking group Anonymous shut down the police website and exposed the data of some police officers in the country operating under the Special Anti Robbery Squad, SARS unit, after the attack on the NPF database.

The cyberattack on the NPF website could be attributed to a series of the onslaught against websites and social media accounts of public institutions in Nigeria carried out by Anonymous.

The group published data of the NPF in batches code-named into files which include ‘arms details’, ‘user uploads’ containing names of police officers that have access to weapons, states in Nigeria where the police have command posts, amongst others.

The hacktivist group which has continued to tweet in support of the #EndSARS movement also attacked the Twitter handle of the National Broadcasting Commission, NBC, posting messages relating to #ENDSARS protest.

It also attacked the website of the Central Bank of Nigeria (CBN) which was down for several hours before it was later recovered.

However, the NPF currently issues its press releases and public notifications through its Twitter handle and Facebook page.

To date, the NPF has not issued any statement indicating its website was hacked or its personnel information was leaked.

When The ICIR reached out to Frank Mba, the Police Public Relations Officer to know why the website had not been restored since the attack seven days ago, he did not answer his call or answered tex messages.

Meanwhile, Kaspersky (https://africa.Kaspersky.com), a cybersecurity company has warned of cyber against African countries, including Nigeria.

According to the company,  Africa is open to the evolving techniques of Advanced Persistent Threats (APTs), and vulnerable to a future target of hacking-for-hire threat actor groups.
Kaspersky has seen a rise of hackers-for-hire or cyber mercenaries during the first two quarters of 2020.