EndSARS: Tales of pain, sorrow as victims recount ordeals at panels across the country

IN A bid to give listening ears to the protesters demanding an end to police brutality in Nigeria and address their concern,  the federal government after the National Economic Council (NEC) meeting on Thursday October 16, ordered the establishment of Judicial panels of inquiry across the 36 states of the federation.

Since the establishment of the Judicial Panels of Inquiry across states, it has been an endless story of agony and pain as victims and families recount experience of police brutality and extrajudicial killings.

The ICIR though had earlier reported stories from hearings at some of the panel,  last week, there were more gory tales than before as petitioners recounted their grief-stricken ordeal before the panels.

One of the petitioners that spoke before the panel this week was Hannah Olugbodi, a middle-age hairstylist, who was crippled by the police stray bullet.

Olugbodi, who appeared before the panel on crutches on Saturday, said the awful incident happened on June 6, 2018, when she was going to buy spices for her family dinner at the Ijesha market.

She alleged that the SARS officers were after the boys, who were watching football at the Ogun City hotel, adding that she got hit by the bullet when the officers started shooting sporadically as the boys refused to settle them.

“On one of those days, some boys were watching a football game when SARS arrived and accosted one of the boys who had tattoos.

“When the SARS men couldn’t extort the boys, they started shooting at them as they ran into the Ijesha market and that’s how I was hit,” she narrated.

She later spent six months at the Lagos State University Teaching Hospital (LUTH), without any of the police officers coming to visit her.

Olugbodi, who appeared before the panel with a large pack of files full of hospital bills said she wants justice, noting that she had spent all she had to pay for surgery, ye she still can’t walk.

Another petitioner, who spoke at the Lagos panel, Adeyemo Rotimi, completely broke down in tears before the panel, as she narrated how her husband lost his life in the hands of police officers.

Rotimi said her husband was a LASTMA official who was shot on November 28, 2018, exactly two years ago.

She said she received a call at exactly 10pm on that day, that her husband had been shot dead by a SARS officer, Olonode Olukunle.

The panel admitted as evidence the photograph the husband soaked in his own blood.

On Tuesday, the panel hearing continued. 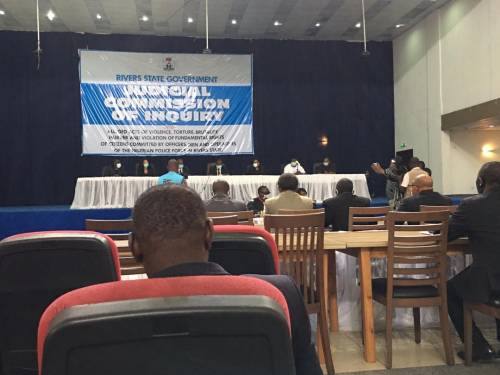 At the panel in  Rivers State, one man, Nyordeh Sylvanus has narrated how his 3-day old daughter was allegedly killed by stray bullets from operatives of the disbanded Special Anti-Robbery Squad (SARS), on the eve of August 14, 2014.

“We woke up in the morning of August 15, 2014, to observe that one of the bullets from SARS operatives who were shooting from the night of August 14, 2014, penetrated my roof and killed my only daughter, a three-day-old baby.

“I picked the bullet on August 15 morning and went to SARS office and but was stopped at the entrance of the office by operatives who ordered me to turn back or join my dead daughter,” Sylvanus narrated.

Another petitioner, Lucky Eze, demanded  a compensation of N20million and footing of his medical bills from the Nigeria Police for causing damages to his right ear.

Eze, who was a supervisor in a Filling Station in Ahoada Town, said he started having hearing problem with a hole in his inner ear after he was slapped by policemen who invaded his place of work on January 28, 2018.

He said: “I came here to seek for justice for brutality and wickedness did to me by the Police on January 28, 2018. I have been having hearing problem since then. I have five medical reports from five medical doctors of the University of Port Harcourt Teaching Hospital (UPTH) confirming that the slap created a hole in my right ear.

“I am here to seek justice for two reasons; one is to be able to continue with my treatment which I abandoned due to lack of funds. I didn’t deliberately abandon my treatment; I did so because there was no money. Secondly, I am seeking justice for the brutality they meted on me. I ask this panel that I be compensated with the sum of N20milliion.”

The panel headed by Hon. Justice Chukwunenye Uriri (Rtd), however, promised to conclude hearing on all the 171 petitions before it on December 30. 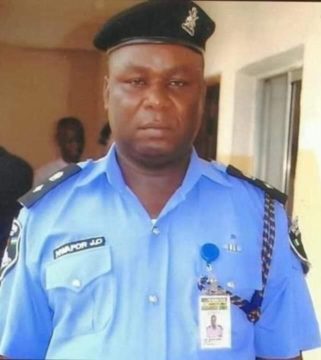 The Anambra State Judicial Panel of Inquiry on Thursday issued a summons on an alleged killer cop with the defunct Special Anti-Robbery Squad (SARS), James Nwafor, and two others to answer questions bordering on police brutality and illegal killing.

James Nwafor was alleged to have perpetrated several brutalities and extra-judicial killings of some innocent people in the state.

The ICIR had earlier reported about a man, Emmanuel Iloanya, who sold N27 million landed properties, including her daughter’s graveyard to secure the release of his 20-year-old son, Chijioke, who was arrested on November 29, 2012.

Iloanya said his son was allegedly killed by the killer cop, James Nwafor, whom he claimed also harassed his wife.

Meanwhile, Veronica Umeh, Chairman of the Anambra judicial panel and a retired judge of the State High Court said the summoned James Nwafor and the two other persons must appear before it on 8th December 2020 to answer allegations against them.

This week, the Ekiti State Judicial Panel of Inquiry announced 30th November, 2020 as deadline for submission of petitions to the panel.

The Chairman of the panel, Justice Cornelius Akintayo (retd) who made the announcement during the panel’s sitting on Wednesday stated that the panel shall not receive any petition beyond the stipulated date.

He added that the deadline would enable the panel to efficiently handle the petitions submitted before it.

Olusola had alleged had alleged that his car, a  Peugeot 505 Salon car, Reg. No YEE 310 AA was vandalized by hoodlums at about 5:30pm at Dalimore area of the state capital during the EndSARS protest on October 19.

After going through the evidence submitted by Olusola, the panel, however, asked the government to compensate the complainant with a sum of N150,000 to put his car back on the road.

A wife and petitioner, Mrs Ese Abugewa,  has called on the Delta State government to effect the release of her husband who is being remanded in Ogwashi-Ukwu Prison over alleged trumped up charges.

Abugewa said his husband was arrested by the Anti-Kidnapping Squad of the Inspector General of Police in August 14, 2020.

Counsel to the petitioner, Albert Agbense told the panel that the police refused to allow the woman see her husband, while detaining him illegally.

Agbense said, “The petitioner’s husband was arrested on the 14th of August and they kept moving him from one police station to the other and nobody knew where he was until after a month when we heard that he was kept at the anti kidnapping office by one Azuka Egede, a member of the IG’s team.

“We discovered that they were using his phone to transfer money from her husband’s account. They also shot his ears and they kept him in police cell.

“We actually got a court order from the Magistrate Court to bring him to court at Asaba, but they refused to obey the order until we took the matter to this panel on Monday and adjourned our case to today Wednesday.”

Meanwhile, the panel adjourned the case till December 8 for hearing

While some states have started hearing the petitions from the victims of police brutality, the Kastina state is just about to set the ball rolling.

Justice Abdullahi Bawale of the Katsina State High Court who is also the panel Chairman said the panel has received not less than 30 petitions submitted before it.

Bawale, however, assured petitioners and the accused that the panel would ensure justice and fairness to all parties in every case.