Enough is enough— we will take definitive measures, Minister reacts to attacks against Nigerians in South Africa

NIGERIA’s Minister of Foreign Affairs, Geoffrey Onyeama on Monday decried the continued attack on Nigerians by South Africans in a recent wave of attacks and looting of foreign-owned businesses in Johannesburg.

Onyeama in a Twitter message condemning the actions of the South Africans involved in the mob attacks which started on Sunday evening, noted that Nigerian Government will take definitive measures.

The attacks have resulted into death of three people, while about 50 businesses owned by foreign nationals have been looted and burnt.

“Received sickening and depressing news of continued burning and looting of Nigerian shops and premises in South Africa by mindless criminals with ineffective police protection. Enough is enough. We will take definitive measures,” he wrote on Twitter.

Received sickening and depressing news of continued burning and looting of Nigerian shops and premises in #SouthAfrica by mindless criminals with ineffective police protection. Enough is enough. We will take definitive measures. @NigeriaGov @DigiCommsNG @GovernmentZA @DIRCO_ZA

In a NAN report, President of the Nigeria Union South Africa, Adetola Olubajo, said the attacks began on Sunday morning in Jeppestown area of Johannesburg when a building was set ablaze by an angry mob.

“The mob also looted several shops that were around the vicinity suspected to be owned by foreign nationals.

“But the Police later dispersed the mob and made some arrests. Late in the evening of Sunday, September 1, a group of violent locals suspected to be Zulu hostel dwellers besieged Jules Street in Malvern, Johannesburg looted and burned shops/businesses,’’ he revealed in his statement.

He said several properties and businesses belonging to foreign nationals worth millions of Rands were looted and burnt in the attack at different locations in Pretoria and Johannesburg.

“Also, some businesses owned by foreign nationals were looted in Germiston on Sunday evening. A Nigerian-owned Internet Café and computer accessories business were among the looted shops in Germiston.

“When I got the sad news late Sunday evening, I immediately informed the Police in Jeppestown but lots of damage had been done already,” he said.

Oby Ezekwesili, a former Minister of Education and social activist in a tweet, also called on South African government to put an end the brutal attack on Nigerians in their country.

Dear President @CyrilRamaphosa and @GovernmentZA , the maiming and killing of citizens of Nigeria and other African countries in South Africa dishonors everything our collective fight for freedom was about. Even as children in Primary School, we played our part. Please STOP IT.

An open-source platform created by the African Centre for Migration & Society, (ACMS) at the University of the Witwatersand to monitor incidents of –and responses to- xenophobic violence in South Africa revealed that from 2006 to 2018 over 309 documented attacks were recorded. 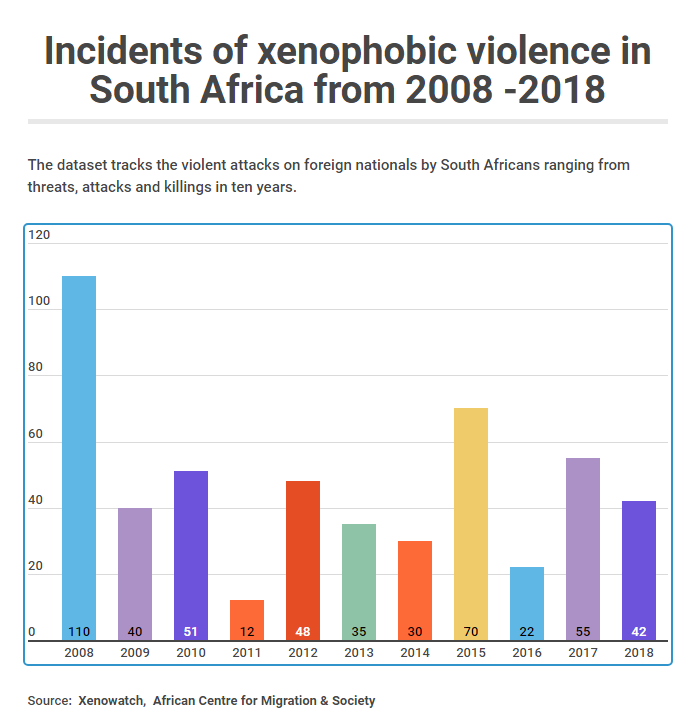 This involves threats, attacks and killings of foreign nationals by South Africans for the period under review.

South Africa has a history of xenophobic attacks by black people who accuse citizens of other African countries, as well as Asian countries, of coming to steal their jobs.

The wave of xenophobic attacks that swept South Africa in 2008 claimed at least 62 lives. Subsequent incidents, particularly in 2015, have displaced thousands of African migrants and led to the large-scale looting of their shops and other businesses.