Ben Foot is the Country Director of Save the Children in Nigeria. The humanitarian organisation is currently working in Maiduguri, Borno State capital taking care of children who are victims of insurgency. In this interview with YEKEEN AKINWALE, Foot who was born in Nigeria and also married to a Nigerian says Save the Children has reached out to over a million children in the troubled areas in the past six years, but there are over one million people that are yet to be reached by humanitarian workers in the state due to insecurity. He laments that everyone claims that children are the future but are unwilling to invest in education and health services.

CAN you cast your mind back when you were coming to Nigeria to start Save the Children, what was the feeling like?

I was really quite excited about it because I was born in Lagos many years ago and my father was then the colonial administrator and acting governor. I was born here but left when I was just two or three and a half years old. So, I got this picture of myself in some chief’s outfit with my brother, he was bigger, standing somewhere in Lagos.

Anyway‎, I was very excited about it. I was coming from Ethiopia; Ethiopia at that time was the biggest programme of Save the Children in the world. I did eight years in Ethiopia. So, after that, maybe it was time to move on. So, where do you go from the biggest programme? So coming to the biggest country in Africa with no programme at all seemed to me to be a challenge I could take on.

By that time I knew very little about Nigeria and to tell you the truth, it has got a bad press in those days. There were stories of fuel crisis continually, long queues for fuel, there are things you read, customs men were very aggressive to you and there was always request for money and queuing on the line. In fact, I didn’t experience it at all, when I arrived in Abuja, it was a clear sail and everyone was very polite and extremely friendly and I found Nigerians generally to be so.

So, what you read in the press was actually different from what you saw on the ground?

Certainly, in terms of my arrival, the fuel crisis was certainly there. That is long queues of cars, having to buy fuels from boys on the road. But I have done two stays here now‎, that time I came in 2001, it was seven years and I went away for seven years and I have come back.

During that initial seven years, I like the country so much that I married to a Nigerian. Now, I have two Nigerian children /British but Nigerians. So, Nigeria is my second home. I have always found in the Nigerians ideal way to be extremely friendly, helpful, and polite and I‎ have enjoyed it tremendously. So, coming to start from scratch was obviously very daunting‎, because it is such an enormous country, where do you start?

So, we chose to go to Kaduna because in 2000 you may remember, there was a major civil conflict in Kaduna where up to a thousand people were killed ‎over a couple of nights of rioting. We decided to go there because also Kaduna is the cross between the north and south of the country and once you move out of Kaduna you are going into the deep north of Nigeria and I was aware from previous reading that northern Nigeria was much more under-developed than Southern Nigeria and as a home specter of problems related to children —putting it bluntly— worst in the world. I think if you put Nigeria together it is not the worst in the world but if you take out the North which is trying to disaggregate it, its indicators for children are worst.

You have seen it all, how would you describe the North-east humanitarian crisis? 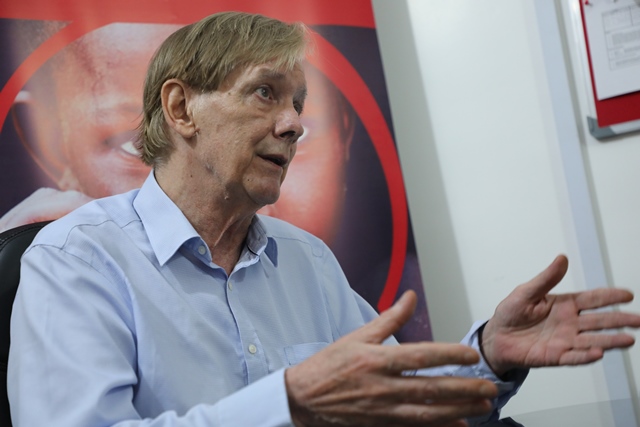 Well, the North-east wasn’t in the crisis when I was here in the first time, because I left in 2007, Boko Haram was not around then. I arrived the second time which was in September 2014‎, I noted straight away that we were not doing anything in the North-east.‎ It is the priority of Save the Children to respond where there are crisis and children are in need. We were aware that Boko Haram was making significant advances into Borno State‎, and people were moving out of the North of Borno State in very large numbers into Maiduguri. We thought we had to go in there and do something about it.

What I don’t know enough about is why did Boko Haram happen, and from what I heard from people talking to me ‎was that the management of the movement in the early days was not done very well and while they try to engage with these people they (government) tried to stamp them out and that is not the way to deal with it. I understood they killed one of the leaders at the time.

I think you have to be very careful when you are talking about conflict because from my point of view, we don’t recognise one side or the other side. What we recognise is the suffering of children, and so whether they are children coming out of being captured by Boko Haram, whether they are children who are displaced, lost their parents, whether they are young girls displaced and raped or girls who have been taken away by Boko Haram, and in some cases when bomb is strapped on them and carrying explosives. So, that is always our focus and not the politics.

Obviously, insurgency is against everything I believe in, but that doesn’t mean I’m not going to try to help people that are in need. We know that the Boko Haram come out of the community, most of them, there may be a few foreign fighters now, but they come from a community and they have some support in the community. It is important that people understand that we are not dealing with some external force that is invading Nigeria. We are talking about an internal force that is coming out and that needs to be recognised and again it’s not my job‎. It is the job of the government to see how they can reconcile the situation. And if you ask me bluntly ‎what I think is the solution, there can be no solution until the government starts to engage with the Boko Haram.

‎‎So far so good, how many children have you been able to come to their aid in the North-east?

‎I might have to look at the exact figure, but we have been there for five years, so I think it is well over a million that we have reached out to in the North-east. We do a number of different things; we do what is called therapeutic feeding, what they called Out-Patient Therapeutics (OTP‎). What we do there is that we provide a monthly ration to each child so that they can eat very high energy stuff and regain their weight, so,  that’s one thing we do.

One of the three reports Save the Children launched on Tuesday, you talked about the huge number of teenage girls ‎ who have not gone to school and you also talked about children and caregivers who would need psychosocial support services, how do you think this can be addressed because they are actually at risk?

Well, it is very interesting actually because everywhere in the world where there is a conflict suddenly appearing or going up, the last thing that gets funded by the donor is education. They (donors) will fund ‎food aid, they will fund non-food item, and they will fund water, but get money for education? If you look at the figures now, you will find out that education is the most under-funded sector. We struggle to get for education, but we have gotten some now and we are trying to work around an approach which is called Save the Schools Initiative.

So, the idea is that you actually start working more with the children themselves and the teachers in the school to make sure that the community can protect the school. And that we have early warning indicators that enable people to know when an attack might be made on that school.

Also, it is trying to keep the military out of school because if the military are in the school, even as a security man, he is a target for Boko Haram. So the military are not a protection for the people, because they are the main people fighting the war, they are going to be targets. For example, we have never used military escorts because we feel safer without them‎ than we do with them.  We think if we do that we try to attract problems to the people that are supposed to be protected.

There are about 50 agencies over there and there is what we call working groups- water group, education group and all that. They work and plan together. There is a coordination structure that exists.

The main thing that is actually stopping us from reaching everybody is the fact that a million people at least are stuck or are still inside Boko Haram’s territory. We cannot go there not because Boko Haram is stopping us but because the military is stopping us.

Do you have problems in assessing some areas where ‎the insurgents control?

Yes, we do because we are not allowed to go, the military will stop you. The northern parts of Borno are more or less a no go area and even then you can even not go to somewhere in Konduga, which is just South of Maiduguri or any other areas under Boko Haram. To be fair to them, they are trying to make sure that we are safe and that we don’t go into where they are having a fight with these guys. But also that, they don’t want foreigners moving into an area where they are in combat ‎ and I totally understand that. But at the same time, we need to try and engage them more and get them to allow us to have access because we don’t feel that we are a threat to Boko Haram. We feel this is a war between the military and the Boko Haram, the fight is not between the Boko Haram and the humanitarian actors. Apart from the UN, no NGO has ever been targeted by the Boko Haram fighters in five or six years.

How do you think the federal government can solve this problem?

I just wish the politicians understood the future and didn’t care so much about the present‎. In Nigeria, we have this terrible rift between the very rich and the very poor, and there is enormous amount of money in this country. When I drive between here (my office) and my home, I see these palaces that were built, enormous buildings and then you go out to the shanty areas in the edge of town and you see ten people living in a room, not even a room, in a makeshift sack, I think Nigeria has to resolve that problem. I think if you look at the way the budget is structured, the amount of money that goes into services for children like education, health is a peanut. Everyone said children are the future but they don’t want to invest in it.