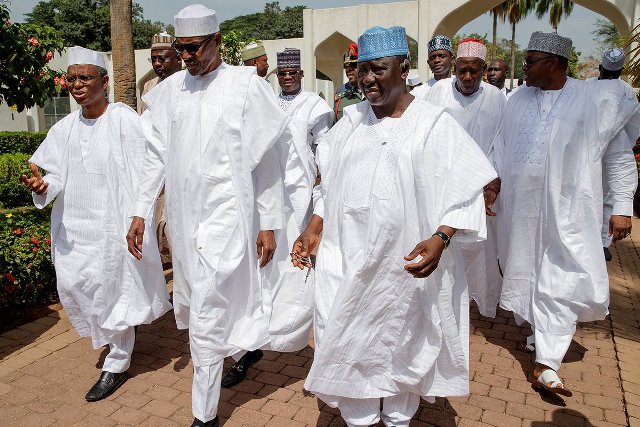 The Buhari Support Group, an amalgamation of 189 groups that worked for President Muhammadu Buhari in 2015, says it has endorsed him for the 2019 general election.

Abu Ibrahim, leader of the group, made this known after he led a delegation to meet with the President at the state house on Friday.

Ibrahim said the visit was to show solidarity and to let Buhari in on some of the activities of the group so far.

“We came here as members of the national committee of the Buhari support group. This is an amalgamation of about 189 different support groups that had worked for President Muhammadu Buhari and the APC to win the 2015 general election,” he said.

“We have been holding meetings, discussing the problems of this country, Nigeria. So, we thought it was high time we met with the President to intimate him about the activities of the group.

“We discussed with him about the plans to improve the situation in Nigeria. Mr President was very pleased with our programmes.”

Ibrahim said his belief in Buhari remained unshaken as he remains the man who can ensure the progress and stability of the nation.

Similarly, Ahmed Lawan, Senate Majority Leader, who joined the BSG on the visit, said Buhari’s “good works” would speak for him come 2019.

“We have issues we think that the administration will be dealing with very successfully, now that we have economic recovery and growth plan which encapsulates everything we need to move Nigeria forward,” he said.

“I believe we are going to achieve those things that we set for ourselves at the moment. I also believe that the future is bright and by the grace of God.

“By 2019, we would have achieved so much in this administration and Mr President will have no option but continue the good work he has started.

“We will continue to identify with and support all the programmes that this administration has set forward.

“And l believe that we have every justification to be happy because, the president campaigned on three major pillars of anti- corruption, fighting the insecurity across the country and revitalizing the economy of Nigeria.

“It has been a very good journey so far and also we believe that Mr. President and Nigerians have a future beyond 2019. What he has started, by the grace of God, he should be able to complete, up to 2023.”

Buhari has not said whether he would seek re-election, but Nasir El-Rufai, Governor of Kaduna State, had told journalists that a group known as ‘Buharists’ was working to ensure that the Presidents runs for a second term.

In September, Aisha Alhassan, Minister of Women Affairs, said she would support Atiku Abubakar, rather than Buhari, should both men indicate interest in running for the presidency in 2019.

In October last year, Aisha Buhari, wife of the President, also indicated that she may not support her husband if he decides to run for a second tenure.