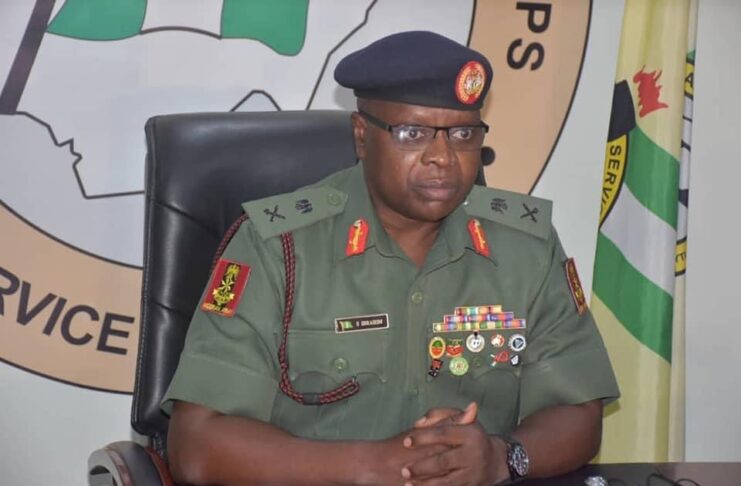 FOLLOWING an investigation by The ICIR into how corps members falsify medical fitness certificates and reports, the Director-General of the National Youth Service Corps (NYSC) Ibrahim Shuaib has promised to address the problem.

Shuaibu, who was represented by the Director, Corps Welfare and Health Service Department, Omotade Ayodele Folorunso, made the promise on an anti-corruption radio programme, PUBLIC CONSCIENCE, facilitated by the Progressive Impact Organization for Community Development (PRIMORG), on Wednesday in Abuja.

Folorunso noted that although the NYSC had made efforts to ensure that falsified documents are not received from corps members at camps across the country, many people still circumvent the system.

“NYSC has put in a lot of measures to sanitize and ensure that due process is followed in the way we do our things.

“For prospective corps members, our routine operations to ensure that whoever is coming to the camp is genuine, we have a team at the gate which comprises NYSC officials, a team that comprises of members of the Nigerian Army, the NSCDC, the DSS, pharmacists, doctors, nurses, technologists all gamut of representation are there.

“I must let you know that in camp there are various degrees of ailment that we don’t allow them to stay on camp but let me also let you know that there’s no human endeavour that is 100 per cent perfect,” he said.

He noted that the development was a reflection of the high level of corruption ravaging the country.

“We are not going to stay here and say we are unmindful of the fact that people or prospective corps members go online to procure fake medical reports. Of course, we are aware. Not only that,[including] procurement of posting.

“The fact remains that as responsible citizens and graduates of Universities and  Polytechnics that we are dealing with, having acquired such  a high level of Education, you should know that the rightful place to transact your businesses as relates to NYSC is very clear. If such persons now neglect all these mediums and go to fake sources to procure whatever services, it’s quite unfortunate,” he added.

Folorunsho explained that corps members caught with fake documents in the past were handed over to the Nigeria Police Force for prosecution and blamed parents for aiding and abetting corruption in the NYSC program.

“We are collaborating with virtually all relevant government agencies, and the federal ministry of health is a particular collaborating agency that we deal with. When culprits are caught, we hand them over to the police, the ones within the ambit of the NYSC administration. We have the bylaws that guide us,” he said.

Folorunso also blamed the Ministry of Health for the proliferation of fake medical documents insisting that it is their responsibility to supervise hospitals.

“Nigeria is a wonderful country where anybody can come and want to circumvent the system. You can’t rule that out. If we have been able to identify where the racket takes place, such information should be taken to the relevant authority.

“Let us re-examine our value system in the country. And to the youths, the fact that leaders have failed does not mean that youths cannot also be on the side of good integrity,” he added.

On her part, Legal Adviser and Director, Gender Inclusion and Yes Project Initiative, Mary Ogwiji, said the forgery problem is caused by the breakdown of law and order generally in the country, as well as the inability of the system to prosecute culprits effectively.

Ogwiji who also said she served in 2018, faulted the NYSC for lack of proper supervision at the orientation camps and called on the organisation to implement stringent measures that will make it hard for corps members to get away with fake medical documents.

“I have passed through NYSC myself. I know we normally have those people at the gate but they aren’t as effective as they ought to be,” she said.

“Someone has to ask the NYSC what they have been doing concerning the persons they have picked up. Although under the NYSC bye-laws, item 16, it is written there that anyone who forges a certificate will be handed over to the police for due prosecution, now the question is, is the NYSC reporting the rising cases of forged certificates.”

She added that any act of forgery attracts heavy punishment in line with the provisions of Section 467 of Nigeria’s Constitution and other relevant provisions.

Also speaking at the event, Chidozie Ogbonnaya of PRIMORG advised the NYSC to ensure that medical certificates are affixed with NMA stamps to affirm their authenticity.