THE Anchor Borrowers Scheme, the federal government’s initiative to boost agriculture and stop the importation of rice is facing challenges in several states, including Cross River and Gombe, reports PUNARIMAM FEHINTOLA  who visited the two states.

Several states across the country benefited from the scheme, including Cross River where farmers are now crying foul. The scheme provides support in terms of loan and seedlings to farmers, which are disbursed through the Bank of Agriculture, BOA.

In Cross River, only 6,000 out of the estimated15,000 farmers in the state were enlisted in the scheme. This, according to the Commissioner for Agriculture and Natural Resources, Professor Egrinya Eneji, was because BOA lacked the capacity to deliver effectively.

Despite the shortfall in the number of farmers in the scheme, the loan disbursement has been anything but satisfactory. Several of the farmers have complained of inability to access the funds at the right time. Where funds were received, farmers complained of not receiving the actual amount.

Umoren Udo, a farmer in Oban Akamkpa Local Government Area, said the rice on his farm was long overdue for harvest when the reporter visited him some months ago, but lack of funds prevented him from harvesting. He expressed fears that rodents could attack the farm if money was not released to him soon to harvest the rice. He lamented that the loans were unnecessarily being delayed.

Another beneficiary, James Umana, chairman of the Calabar Amalgamated Cooperative Society Limited, stated that the scheme was facing several challenges in the state. He, however, said the biggest challenge was the delay in funds disbursement.

“Money was given very late from the beginning of the scheme and the last tranche of the money for harvest is yet to be paid as well,” he said.

But this allegation was disproved by Professor Eneji who said the loan amount was not reduced. According to him,  the entire loan was not supposed to be given out only in cash, but also as seedlings. “But the farmers were expecting everything in cash,” he said.

The chairman of the Rice Farmers Association of Nigeria (RIFAN) Cross River State Chapter, Barrister Fidel Egoro, however, observed that the program has not met the expectation of farmers because the seedlings supplied to them had expired while fertilizer also came late. He said the government ought to be mindful of the farming cycle and ensure seedlings and fertilizer were delivered at the right time.

The blame for this, he said, must go to the BOA and the Federal Ministry of Agriculture which supplied the seedlings and fertiliser.

But BOA denied the allegations. Takim Tawor, branch manager in Cross River state, said the farmers who complained were given some other seedlings as replacements for the bad once.

Responding to the allegations, the CBN’s Director of Finance Development in Calabar, Aniefiok Umoren said, part of the problem was that many of the farmers lived in the rural areas and had a problem about bank’s BVN, which slowed down the process of loan disbursement. Also, he said, slow network affected the smooth running of the process.

Notwithstanding, Takim blamed the CBN for the delay of disbursement of funds.  “ CBN withdrew all the money deposited for the scheme without consultation with stakeholders”.

Takim said the withdrawal caused unnecessary delay in funds disbursement and hindered the smooth operation of the scheme.

The situation in Gombe State is not different. According to the state Commissioner of Agriculture, Dahiru Biri, farmers in the state were not aware of the procedure to access the loan.

“Many people thought it is free money from the government so when we explained to them and later realised that some of them are not actual farmers who couldn’t identify with any cooperative, they had to opt out”.

He also admitted that some farmers had suffered huge losses as a result of draught but stated that this has been reported to the Bank of Agriculture which had tried to find ways to compensate those affected through NIEC, the insurance company in charge of the scheme.

The commissioner also identified the repayment of the loans as one of the major challenges.  “The farmers are refusing to pay back these loans which is a huge concern with a nine per cent interest rate considering the market price as at when the loans were disbursed”.

On the other hand, Ibrahim Shehu, a farmer and beneficiary from Billeri local government area, complained that all the seedlings that were given to him had expired, so he did “not gain anything from this scheme”. He also complained that the scheme was ridden with corruption.

“The most annoying thing of all is even the fertiliser. We were given at N8,500 but N5,500 was written on the bags and the market price was going for N5,500 so it got all of us confused.”

Saidu Aliyu a farmer from Gidan Gari in Gombe State insisted that the scheme didn’t make any impact in the state, accusing the government of not following the due process in giving out the loan.

“I dare the government of Gombe State to publish names of beneficiaries and figures spent on this scheme. No farmer got anything from this scheme, I can’t say if Kebbi and other states got but not Gombe State”.

Not all farmers have a bad story to tell anyway. A farmer from Bajoga, Garba Sani,  appreciated government efforts to make available loans to farmers. “With the loan, I can now farm rice in large quantity,” he said but stressed the need for urgent intervention on the last disbursement.

“The CBN should, please, conclude the good deed by giving us the remaining balance so we can harvest the rice at the due time,” he pleaded.

The Branch Manager of BOA in Gombe State, Adamu Idris, was asked to react to allegations of fraud by farmers but refused to comment on the issue.

“I need authorization from the head office to talk on this issue. Besides, I am not the spokesperson for the bank, I am sorry”, he told the reporter.

In 2017, there was a huge allegation of corruption in the loan disbursement by the All Lower Farmers Association of Nigeria (ALFAN), which pointed accusing fingers at Idris and the Gombe State Commissioner for Agriculture, Alhaji Dahiru Buba Biri, alleging that they were manipulating the process for personal gain.

The farmers accused the Gombe State Ministry of Agriculture and the BOA, of shady deals and denying them the funds provided by the Anchor Borrowers Scheme. But both men denied the allegations.

Secretary and spokesperson of the association, Malam Sani Idris, alleged that both BOA and the ministry have been introducing stringent conditions that are not in tune with what the CBN told them about the facility.

According to him, some of the illegal stringent measures they were allegedly made to go through were that the farmers were asked to form cooperative groups and register with N10, 000.00 and N20, 000.00 for consultancy and another N20, 000.00 for a surveyor to survey their farms.

And many of them did.

The association further alleged that BOA also demanded N3, 000. for the opening of individual accounts with the bank and then another N3, 000.00 for loan disbursement.

But when contacted, Idris said only the Commissioner of Agriculture who is the chairman of the Anchor Borrower Scheme in the state, has the authority to comment on the matter.

On his part, Biri explained that the initial proposal of N300,000 came down to N250,000 because the amount earmarked for water pumps meant for dry season farming was subtracted from source, adding that the surveying of the farms was to facilitate tracking beneficiaries’ farm and farming activities through the Global Positioning System (GPS), while registration is a precondition for the recognition of the cooperative society under which they could benefit.

According to him, the loan is given in both cash and inputs. He, however, denied any knowledge of the N71, 500 charged by BOA for land clearing and other services.

Biri also confirmed that credit facility attracted nine per cent interest and that it would be paid in a single instalment through the exchange of farm produce after harvest.

He said that to meet the condition of the loan, the state had to agree to pay Irrevocable Standing Payment Order (ISPO) to the CBN which needs the approval of the State Executive Council and the state House of Assembly but which was still pending. 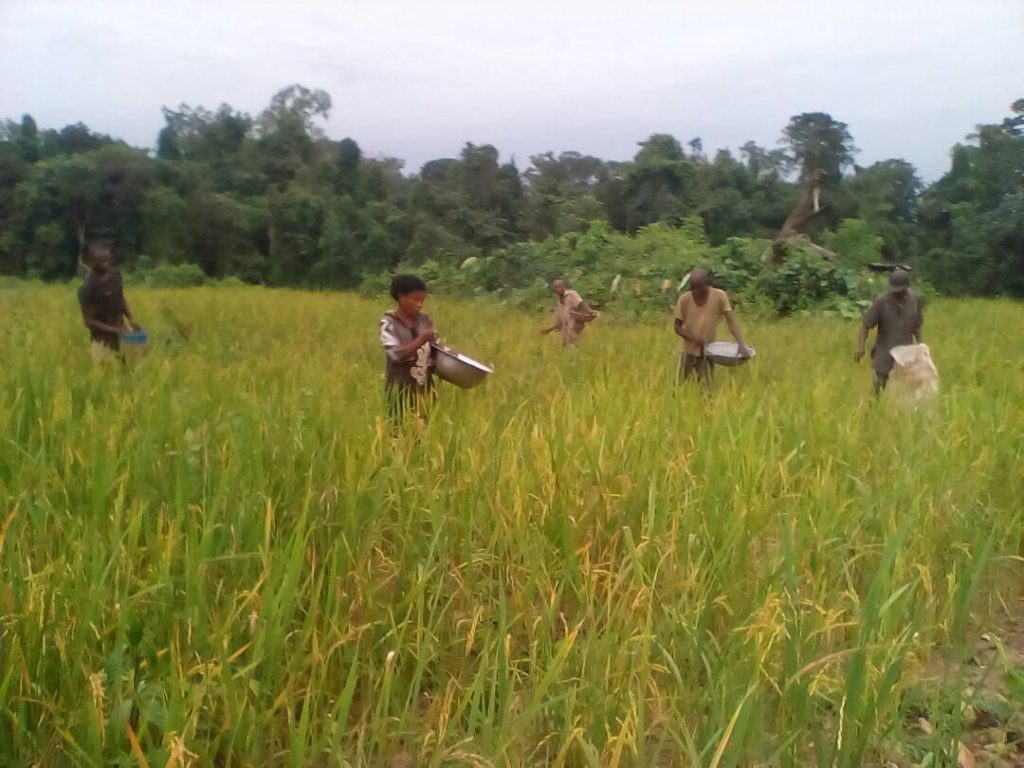 What is the CBN doing?

It was learnt that following many complaints about the operation of the Anchor Borrowers Scheme, the CBN has launched a new system to tackle the problem of logistics. The apex bank has handed the next phase of the program to RIFAN headed by its national chairman Alhaji Aminu Goloyo which, according to the bank, has a record of all members and the capacity to run the program more effectively.

The Special Assistant to the CBN Governor on Development Finance, Tunde Akande who provided this information, disclosed that the issue of bad seedlings has been channelled to NIEC, an insurance company engaged to deal with such cases.

“We are collaborating with RIFAN. CBN has graduated from government to private sector partnership and also digitalization where every member will be captured online and identified for effective implementation, ” he explained.

When asked why there was a delay in payment and why was the funds for the scheme withdrawn from BOA,  he said CBN prefers working directly with farmers because it is more effective to do so since the farmers have received training and mentoring, were assisted with the right technology.

Spokesperson of the Central bank of Nigeria, Isaac Okorafor, was unavailable for comment despite the effort to query him on the allegation of fraud by BOA. Several calls and text messages to him, and to a senior staff of the corporate communications department, Isa Abdulmumuni, were either not answered or returned.

This investigation was supported by the John D. and Catherine T. MacArthur Foundation and the International Centre for Investigative Reporting (ICIR).