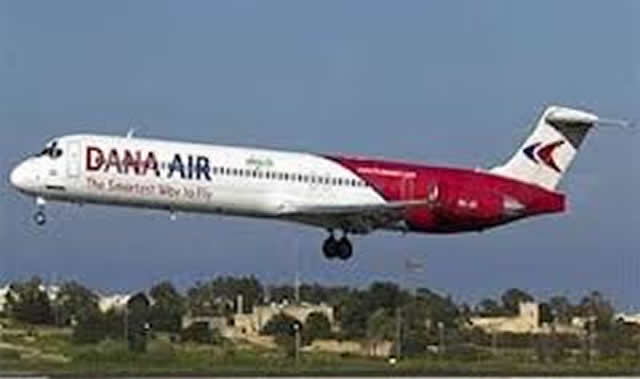 The federal government has again suspended the operations of Dana Air’s nationwide to allow it conduct operational audit on the carrier and its planes.

The Nigerian Civil Aviation Authority, NCAA, said Sunday night, that the decision was part of precautionary measure to ensure safety of passengers after the airline had an air return.

“I can confirm the suspension of Dana Air’s operations to you. They had an air return from Port Harcourt and they have been suspended for precautionary measures. The airline is under investigation,” Fan Ndubuoke, spokesperson of the NCAA said.

The aircraft, laden with passengers was Lagos bound but lost one of its engines after flying 38 miles from Port Harcourt and had to make an air return.

It would be recalled that Dana Air had a crashed plane last year in which 163 people died.

The latest suspension of Dana’s operations made it the third time the NCAA would be grounding the carrier over safety and other related issues.

The government had on June 5, 2012 revoked the operational licence of Dana, two days after its Boeing MD-83 crashed in Iju-Ishaga, Lagos.

On March 17, 2013, the government suspended the operations of airline again in order to “resolve certain safety issues,” according to the NCAA.

It is not clear how long the latest suspension would last.

Meanwhile, the Accident Investigation Bureau, AIB, has announced the commencement of investigations into the causes of the crash of an Associated Airlines flight on Thursday and the near-crash of a Kabo Air plane on Saturday.

A statement from the agency on Sunday confirmed that the readout of the recordings of the Associated Airlines’ flight recorders had started.

The statement signed by the commissioner, AIB, Muktar Usman, said: “We have commenced investigation into the crash of the Embraer 120 ER aircraft marked 5N-BJY belonging to Associated Aviation Limited.”

It added: “Flight recorders of the ill-fated aircraft have been recovered and will be downloaded at the Bureau’s newly installed flight laboratory at its Abuja headquarters. The readout of the recorders has commenced.”

In a separate statement, the AIB also said investigations had commenced into the incident involving a Kabo Air B747 plane, which occurred in Sokoto on Friday.

The aircraft, carrying Saudi Arabia-bound pilgrims, was believed to have had burst tyres on landing.

“The AIB investigators have been dispatched to conduct an investigation into the circumstances surrounding the incident to determine the probable cause. The investigation is not to apportion blame or liability, but to prevent future re-currence of similar incidents and improve air safety through safety recommendations,” the statement explained.