Kogi has conducted only one test


LAGOS state has conducted 14,886 Coronavirus disease (COVID-19) tests, representing 41.37 per cent of the entire tests done in the country, according to data from Nigeria Centre for Disease Control (NCDC).

On May 13, the Kogi state government had said 111 residents were tested for COVID-19 but that the tests returned negative, this is contrary to the NCDC data that revealed that after three months when Nigeria recorded its index case, just only one test has been carried out in Kogi state with no confirmed case yet. 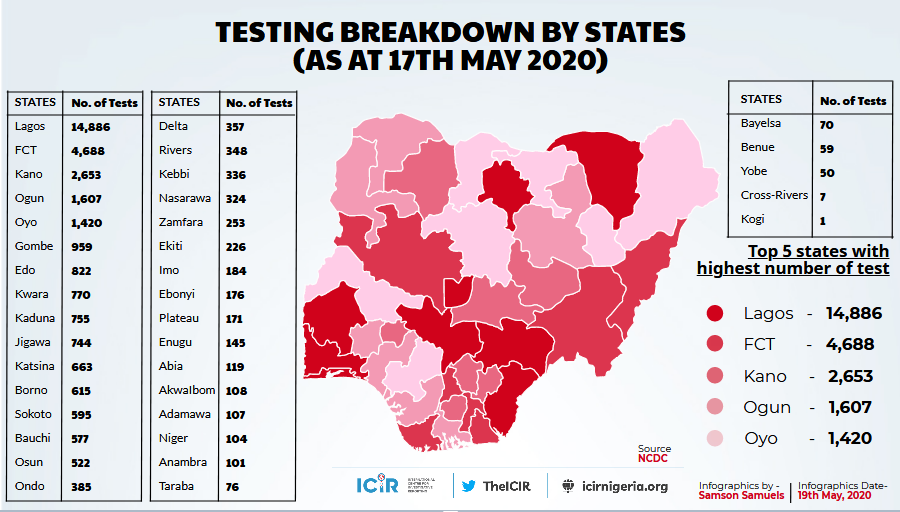 Lagos state government, on April 19 had set up sampling stations in the 20 local government areas of the state for citizens who fit the case definition of COVID-19 to visit and drop their samples for testing.

This aggressive testing strategy has helped the state in identifying cases, making it the state with the highest number of confirmed cases in the country with 2,624 cases.

Nigeria is still lagging behind in terms of testing across the continent.

However, the NCDC has as at May 16 activated another molecular laboratory at the Accunalysis Diagnostic Centre, Anambra bringing the number of laboratories for COVID-19 testing in the country to 26.

In terms of tests per million, Nigeria continues to dip down as it ranks 39th in Africa.

While testing remains critical, public health officials across the world, including the World Health Organisation (WHO) have linked the importance of testing of the pandemic to quick identification of cases, quick treatment for those people, immediate isolation to prevent spread, and identification of persons who came into contact with infected people so they too can be quickly treated, two months after the first case was confirmed, Nigeria is not still testing enough.

Tedros Ghebreyesus, WHO Director-General, announced this recommendation in March.

“We have a simple message for all countries: test, test, test. Test every suspected case. If they test positive, isolate them and find out who they have been in close contact with up to 2 days before they developed symptoms, and test those people too,” he said.