He will soon become a ‘saint’: Nigerians react to Akpabio’s rumoured defection to APC 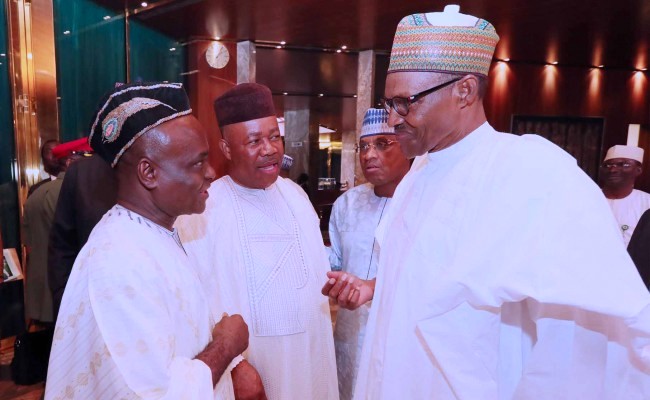 IF all the reports on social media, including those from presidential sources, are anything to go by, Godswill Akpabio, former Governor of Akwa Ibom State, and current Minority Leader of the Senate, has defected from the Peoples Democratic Party (PDP) to the All Progressives Congress (APC).

Reports say he will be formally received into the ruling party on Wednesday, August 8, at a grand ceremony in Uyo, the Akwa Ibom State capital. Vice President Yemi Osinbajo will lead the entourage of dignitaries that are expected to grace the event, according to APC sources on Twitter.

Although the rumour has been making the rounds, it was again shared on Twitter by one handle going by the username ‘APC Newspaper’, and confirmed by Ita Enang,  Special Assistant to President Muhammadu Buhari on Legislative Matters (Senate), via the same Twitter on Saturday night.

“I’m confirming that the APC family as earlier indicated will formally receive his excellency Godswill Akpabio on Wednesday, August 8,2018 at an elaborate ceremony in Akwa-Ibom State,” the tweet read.

BREAKING: We can confirm that, HE, Sen (Dr) Godswill Akpabio is a card carrying member of @OfficialAPCNg effective August 4, 2018. @OfficialPDPNig has lost him. Official Reception in days pic.twitter.com/LSpRPSCctY

Though Ita Enang’s Twitter handle is not yet verified (a verified Titter handle has a blue tick as proof of its authenticity), the post was retweeted by Kayode Ogundamisi, a popular social media influencer and Buhari supporter.

This development has generated serious conversation among Twitter users as it comes as a huge surprise to many. Some said the PDP strong man is being blackmailed and threatened with corruption prosecution if he refused to decamp, while others were convinced that once in the APC, Akpabio’s “sins” will be “washed away” and he will become “a saint”.

Akpabio had been indicted by the Economic and Financial Crimes Commission (EFCC) but no formal charges have been brought against him.

Here are some of the reactions:

I sincerely congratulate Akpabio for proving to the whole world what we’ve always known, that a devil transfigures to saint from PDP to APC and the opposite when he moves from APC to PDP… https://t.co/2QLhPMKPAc

So i guess we will stop hearing on planet radio and inspiration how Akpabio mismanaged billions of naira… They will suddenly call him a saint now, and a man who changed Akwa Ibom. Can’t wait

For those who think Saraki leading 12 largely irrelevant Senators and some Kwara local champions to @OfficialPDPNig is a masterstroke, wait till you hear the names and pedigree of those following Akpabio to @OfficialAPCNg.
Saraki’s move will look like that of a learner. pic.twitter.com/SkzmpEBzPR

So Akpabio lied to his PDP compatriots that he couldn’t attend the NEC meeting on Thursday because he was travelling abroad, only for them to see him at the Villa with VP Osinbajo. If he can cheat with you on his current party, he can cheat on you too. #NuffSaid

Godswill Akpabio – the senator representing my local govt is extremely popular because he transformed our area significantly as Governor. His impact was massive. He enjoys huge, huge support. At least 1/3rd of Akwa Ibom will vote for who Akpabio says to vote for.

The EFCC will arrest Senator Godswill Akpabio by Wednesday next week if he does not defect to APC. He pleaded with Osibanjo to give him until the resumption of plenary for him to consult widely.
The man is under serious pressure from Buhari and his people.

I hear APC has some dirt on Godswill Akpabio and have mandated him to decamp into their fold or be exposed and hounded by EFCC.
Oga Godswill, your legacy in Akwa Ibom is bigger than whatever APC has on you. Don’t allow APC reduce you to forger Kemi Adeosun’s level. Fight back.

If Akpabio quits PDP, its not because of any EFCC rubbish. The virtually unknown man he made governor has been hijacked by vultures.

If Akpabio joins APC, that will mark the end of Saraki’s hold in that Senate

He will match him money for money, strategy for strategy and corruption for corruption.

Suddenly some people who never saw any good in Godswill Akpabio are now praising him. Can I really play Nigerian politics where what is good or bad depends on the religious/ ethnic/ political affiliation of the actor.# Our anticorruption fight is really working

Akpabio just got immunity from prosecution by joining our anti-opposition party that ought to be anti-corruption..WAKE UP MY PEOPLE

Akpabio is one of the political heavyweights in the PDP. That is why so many Nigerians could not understand why he is changing camp. Reports, however, have it that he has fallen out of favour with his successor, Emmanuel Udom.

Udom served as Secretary to the Akwa Ibom State government when Akpabio was governor, and it is believed he won the election largely to Akpabio’s support.

Like Buhari said when several lawmakers defected to the PDP, “all politics are local”.