THE IMPACT of the illicit market on violence and instability in Nigeria has been recognised as multi-dimensional.

This was contained in a report by the Global Initiative Against Transnational Organized Crime (GI-TOC), which revealed that illicit markets do not only drive instability and violence but also serve in some contexts to maintain a degree of stability.

“Many factors have contributed to the growth in violence across Nigeria. However, illicit markets have played a notable role in its escalation and diffusion across the country,” the report stated.

It recognised arms trafficking to be a consistent accelerant of instability and violence, adding that it often contributes to the fragmentation of conflict.

It also highlighted that cattle rustling is an illicit market that needs to attract more urgent attention than it does, particularly because of its role in exacerbating community tensions and arming populations.

The report stated, “It is a market that has also been highly detrimental as a key source of revenue for conflict actors in Nigeria. Research into terrorist financing in West Africa has cited the prevalence of cattle rustling as a central feature of criminality, and a key source of financing for jihadist groups in the Lake Chad Basin.”

It also revealed that the security situation in Nigeria has deteriorated since 2006, but witnessed an accelerated decline over the last five years.

“Data from Nigeria Watch, an organization that has monitored violence in Nigeria since 2006, points to acceleration and geographic diffusion of instability, and an increasing number of violent actors behind it,” it read.

It attributed the surge in the deaths in the country between 2012 and 2015 to the violent attacks by Boko Haram in the North East. 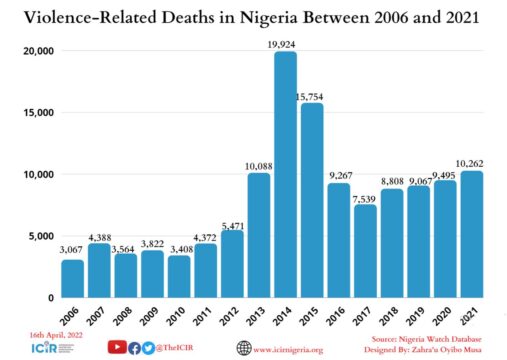 The direct causes of these deaths were said to include crime and conflicts associated with cattle grazing, land, markets, oil production and distribution, politics, religion and sorcery/witchcraft.