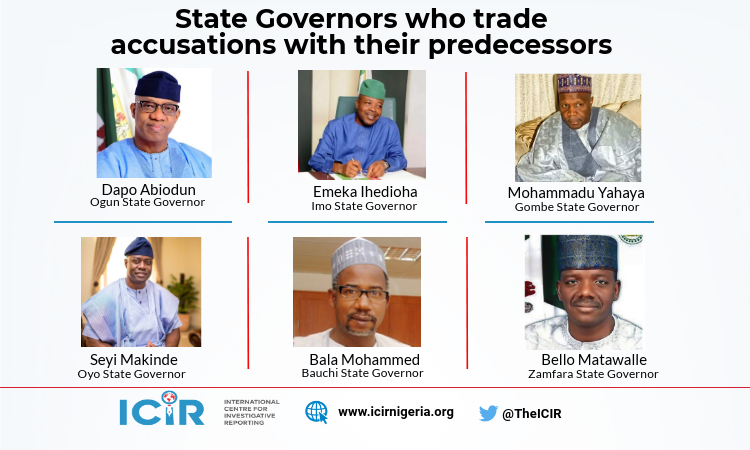 SHORTLY after their inauguration on May 29, 2019, governors of Oyo, Ogun, Bauchi, Imo, Gombe and Zamfara have cried out that their predecessors have left huge debt profile for their respective states.

Each claimed that the former governors have plundered the states’ wealth and would be near impossible for them —the incumbents, to govern well with empty treasury.

Their predecessors have countered the claims of leaving debt behind.

While they exchange blames, none of them (incumbents and predecessors) have been able to make public, their complete debt profile .  This has prevented the public from knowing the actual debt profile of each of these states.

However, The ICIR has compiled the debt profile of the six states and presents same viz-a-viz claims by the governors and their predecessors.  The profile includes what each past governor inherited when coming to office in 2015 and the debt profile as of December 2018, according to the latest record of Debt Management Office (DMO).

Claims and counter claims by governors

Almost a month after he took the oath of office, Ogun state governor, Dapo Abiodun, said he inherited a state treasury with “almost nothing” from his immediate predecessor, Ibikunle Amosun.

But Abiodun, who was silent on the amount he met in the state’s account, said he had to borrow money from his friends, who are Managing Directors in some commercial banks, in order to pay May salary, which he puts at over N7billion.

But Amosun’s Allied People’s Movement (APM) faulted his claim by describing it as a concoction of lies and clear evidence of his lack of preparedness for governance.

While these claims and counter claims continue, search by The ICIR revealed that Ogun State domestic profile according to the Debt Management Office (DMO) as of December 2018 published in April 2019 was N98.8billion while its external debt for the same period was $105million.  The domestic debt in December 2014 published in April 2015 when former governor Amosun was commencing his second term was N70.2billion while the external debt was $104million.

From these figures, Ogun State’s domestic debt profile increased from N70.2billion to N98.8billion while its external debt also increased marginally from $104million to $105million.

While the immediate past governor of Imo State, Rochas Okorocha claimed that he left a total of N42.5 billion in the coffers of the state’s treasury for his successor, Emeka Ihedioha, the latter insists that no money was released to his administration by the Okorocha-led past administration during the handover/swearing-in ceremony.

Governor of Oyo State, Seyi Makinde like his peers who took over from the opposition has also cried out about a looted treasury. He announced that his government has discovered N150 billion debt within the first 30 days of his assumption in office. He summed up the debt to be around $500 million but said it would not stop his lofty programmes and electioneering promises to the people in four years.

Makinde said more debts are still being collated by government officials which would be made public soon.

Despite the governor’s claim of uncovering N150billion debt, DMO’s record show that Oyo State domestic debt as of December 2018 was N91.5billion with an external debt of $72.4million. The record also shows that the state’s domestic debt rose from N12billion in December 2014 to the current figure while its external debt was $72.3million for the same period.

Salihu revealed that the expenditure was gathered from documents, vouchers, and payments made from the state’s treasury books.

But the former governor countered the claim, saying he only spent N1.2billion for the same purpose.

Abubakar, who spoke through a statement issued by his former media aide, Ali M. Ali, said financing burial of the dead was an inherited practice, which his administration upheld.

Yahaya spoke against the backdrop of the report of the transition committee he set up, which revealed that the former administration left a debt burden of N119 billion.

But, Dankwambo, who attempted to fly the PDP’s presidential flag in the general elections, insisted in his valedictory speech that “as at May 28, we do not owe any commercial bank in the state. No single bank.”

The state’s debt profile as released by DMO in April 2018 revealed that it has N63.3billion as its domestic debt and $38.5million as external debt. With this figure, it might be that the state’s domestic debt profile has increased from N63.3billion to N119billion claimed by the new governor between December 2018 and May 29, 2019, when the former governor relinquished power.

As of December 2014 however, figures by DMO indicate that Gombe State had N29.6billion and $40million as external debt respectively.

While Abdulaziz Yari, the immediate past governor of Zamfara State insists he left no debt or liability to the new administration under Bello Matawalle, the incumbent maintains that he inherited a huge debt profile. The former governor said he left N7 billion as a take-off for the new government.

The new governor had claimed that Yari administration left a debt of over N251 billion. It’s not clear if this figure is inclusive of external debt.