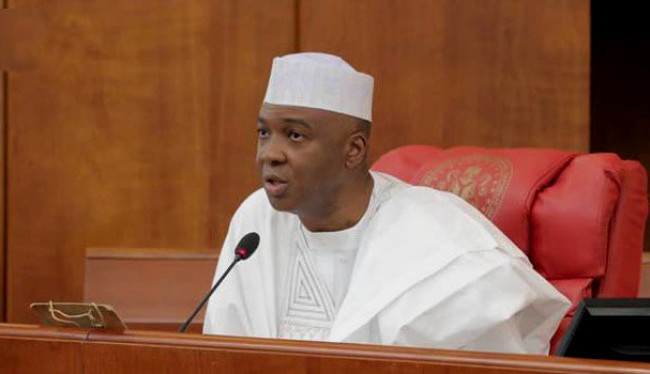 
BUKOLA Saraki, Senate President says the eighth senate has passed a total of 213 bills in its first three years of existence, making it the most productive senate since Nigeria returned to democracy in 1999.

This was contained in a statement Saraki issued on Monday to mark the third anniversary of the eighth National Assembly which was inaugurated on June 9, 2015.

“In three short but eventful years, we have definitely come a long way in this 8th Senate. We have worked assiduously and diligently to meet the demands of Nigerians and a changing economy that experienced a recession just a year after we assumed office,” Saraki stated.

“In this time, we have passed 213 Bills, (and) cleared 138 petitions submitted by the public. We are happy to say that this Senate is the most productive since 1999.

“It has surpassed the 5th Senate which with 129 bills in four years had the highest number of bills, as against the 6th Senate with 72 bills, and 128 passed by the 7th Senate.

“The number of petitions we have successfully treated to the satisfaction of Nigerians who filed them dwarfed the eight and six treated by the sixth and seventh Senate respectively.”

“With the support of the Nigerian public, we were able to break the PIB jinx, by passing the Governance Component of the Petroleum Industry Bill, and now, we have successfully conducted the Public Hearing on the Administrative, Fiscal and Host Community Components of this Bill — taking it to its farthest stage since 1999,” Saraki said.

“Also of note is our passage of the constitution amendment bills, some of which will change the landscape of governance in Nigeria.

As another general election draws nearer, Saraki assured Nigerians that the legislators will remain focused on issues of governance and will not allow politicking distract them from their primary responsibilities which is to represent their respective constituencies.

“Some might see it as a time to leave governance and focus on politics. We do not believe this. We will continue to push forward and continue to perform. This is what Nigerians who sent us to Abuja to represent their interests expect of us.”

‘My lawyers will be approaching the…