THE National Bureau of Statistics (NBS) says on a month-on-month basis Consumer Price Index (CPI), inflation rose by 0.15 percent from 11.98 percent to 12.13 percent at the end of January 2020.

With this rise, Nigerians will spend more on commodities than the previous months.

According to the NBS, the increase was recorded in all 12 Classification of Individual Consumption by Purpose (COICOP) divisions that yielded the headline index.

In a report released on Tuesday, the NBS explained that the rise in inflation was majorly due to the price hike in the food item index and all items, less farm produce.

The report explained that on a month-on-month basis, the headline index increased to 0.87 percent in January 2020, which is 0.02 percent rate higher than the rate recorded in December 2019 (0.85) percent.

According to the report, the rise in the food index was caused by increases in prices of Bread and cereals, meat, oils and fats, potatoes, yam and other tubers and fish. 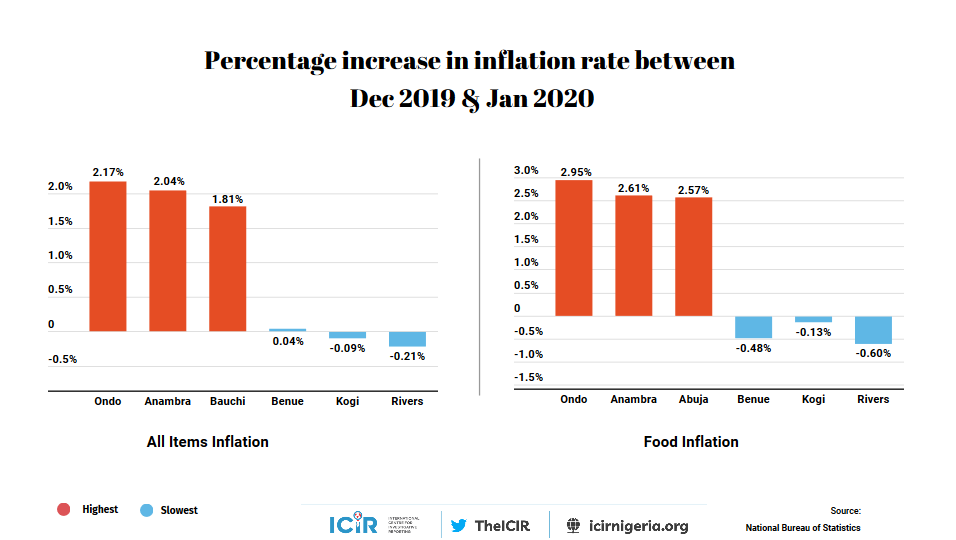 NBS also reported that the ”All items less farm produce” or Core inflation, which excludes the prices of volatile agricultural produce stood at 9.35 percent in January 2020.

This went up by 0.02 percent when compared with 9.33 percent recorded in December 2019 on a month on month basis.

NBS reported that on a month-on-month (food inflation) basis, however, January 2020 “All items inflation’’ was highest in Ondo 2.17 percent, Anambra 2.04 percent and Bauchi 1.81 percent.

REMINDER: 10 times Buhari, his ministers were “not aware” of obvious happenings