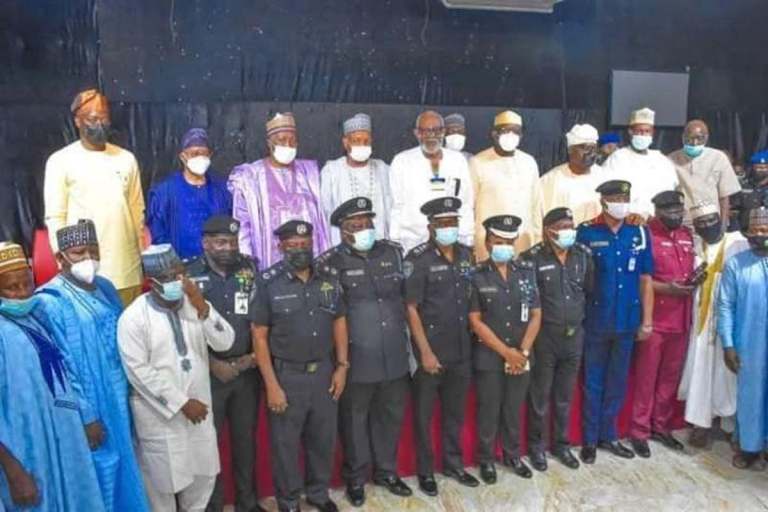 FRAYED nerves were relaxed as governors of South-West states signed a peace pact with the leadership of Miyetti-Allah Cattle Breeders Association of Nigeria (MACBAN) on January 25, 2021. The pact neutralized the tension generated by the ‘quit notices’ issued to Fulani by Governor Arakunrin Odunayo Akeredolu, SAN, and activist Sunday Igboho, who operates in Oyo State. Signed in the presence of security agents, the agreement says

Other smooth elements in the agreement, as stated in the communique, say:

But it is noteworthy that some important stakeholders were excluded from the meeting.

Here’s are the actors left out

The insecurity in the South-West and in many parts of Nigeria is a classic case of organised crime. As many peasants have testified, herders and farmers had interacted peacefully in the South-West for decades. Farms were not destroyed. Farmers were not hacked to death. Women were not raped. People were not kidnapped for ransom. What factors or actors led to the current nasty situation? Any deal without taking into account how to tackle the factors and actors who brought the calamity upon Nigeria would amount to empty talks. Below are some actors who should be reined in:

There are bandits in forestall over Nigeria. Instead of talking to Miyetti Allah, South-West governors should look for leaders of bandits to hear them out. Sokoto, Katsina, Zamfara and Kaduna States have been in talks with bandits in order to tackle crime and criminality in the North-West. The South-West should seek out the leaders of bandits in their forest and talk with them, instead of relying on Miyetti Allah. There is a chain in the criminality which is not under the control of Miyetti Allah. There are kidnappers, transporters, negotiators, collectors of ransom, telephone operators, policemen who provide bandits with cover to evade the law, and the lords who become rich in the wealth transfer from Nigerian cities to criminals in the forest. With good intelligence, South-West governors should be able to identify these evil but powerful men and speak with them. It is not as if they are reliable, as truce keepers, but it is good to identify them, in the first place. Note that Katsina, Zamfara, Sokoto, Kaduna didn’t sign any agreement with Miyetti-Allah. They fished out bandits and engaged them. Read Katsina Killings: We Signed Peace Accord With Bandits To Avoid Loss Of Lives But They Betrayed Us, Governor Masari Says | Sahara Reporters

There is a chain in the criminality which is not under the control of Miyetti Allah.

Most of the herds of cattle are not owned by herders. Top civil servants, politicians, businessmen, Nigerians in the Diaspora, etc launder [illicit] cash in the cattle business. This is because investments in cattle may not be tracked by the Economic and Financial Crimes Commission (EFCC). Also, at a time when the interest rate on cash deposit in banks is next to nothing, an investment in cattle, which appreciates with inflation, is a smart idea. But cattle owners would not want to invest in ranches, as it will impose on them the additional expenditure of ‘buying pasture’ for cows. They rather use Fulani in the forest who see it as their ancestral duty to live for cattle. These cattle owners in cities may be those who armed herders with sophisticated weapons to terrorize rural farmers. They may have given violent herders the confidence to act with impunity. What to do? The South-West governors (and Nigerian governors) should ask Miyetti Allah and Fulani leaders in the forest to disclose owners of the cattle. The investors should be held responsible if herders who take care of their herds engage in criminal acts. It is time to know who owns the cattle for which Nigerians die on a daily basis.  Read the Crisis Group report which says cattle owners are central to solving the herders-farmers conflict in Nigeria: Stopping Nigeria’s Spiralling Farmer-Herder Violence | Crisis Group

Investments in cattle may not be tracked by the Economic and Financial Crimes Commission (EFCC).

Traditional rulers and community leaders play devilish roles to fertilize the predicament of farmers and herders. Instead of ensuring justice and fair play when settling disputes between these peasants, community leaders in rural areas use conflicts as an opportunity to drain the resources from peasants. They frustrate farmers by discounting the value of crops destroyed by cattle; they extort herders by forcing them to pay heavy compensation which is never given to farmers. Herders are equipped with the feeling that impunity would bring no punitive consequences, as long as they have cows to sell and bribe community leaders.  The government should set up a committee populated with men of integrity to whom peasants could make appeals for redress if they are dissatisfied with the mode and kind of settlement done by community leaders. Read how traditional rulers were found to be involved in banditry in Zamfara State: Zamfara suspends four traditional rulers over banditry allegations – Punch Newspapers (punchng.com)

Like traditional rulers and community leaders, policemen and judges extort herders and farmers – to the disadvantage of farmers. Under the cloud of corruption, many rural police posts are excited at ‘Fulani cases’ because such disputes would fetch them cash for palm wine and bush meat. Judges pervert justice by conniving with lawyers who defend Fulani herders that run afoul of the law. Apart from frustrating farmers, the activities of these judicial workers give herders an upper hand and embolden them to act with impunity. Judges and policemen should be educated on how their corrupt practices inflame violence and impunity in the country. Again, a committee where appeals could be made by peasants should be set up to deal with this situation. Read this report that says security personnel are also complicit in banditry: 5 Emirs, 33 District Heads, Top Military Officers Complicit in Zamfara Banditry | THISDAYLIVE

Under the cloud of corruption, many rural police posts are excited at ‘Fulani cases’ because such disputes would fetch them cash for palm wine and bush meat

Most of the violent Fulani herdsmen who engage in criminality are said to be foreigners who illegally entered into Nigeria from Mali, Niger, Central African Republic (CAR), Chad, Libya, and the rest. Immigration personnel look away when these criminals enter into Nigeria, perpetrate crime, and return to their base, without being questioned. These foreigners have flooded the South-West as menial workers (who actually gather intelligence for criminals in the forest) and they operate without being checked. On their part, Customs has not explained how these criminals entered into Nigeria with a lot of weapons unchallenged. Apparently, Immigration and Customs need fresh orientation and strategies to enable them to rise to the challenge of ensuring tight control of Nigeria’s borders in the 21st Who says Nigeria should not build walls at its borders to ward off criminals? America, Israel, Saudi Arabia, North Korea, Russia, etc have done so. Read this report that emphasizes the failure of immigration and Customs at Nigeria’s borders: Nigeria needs a competent customs and immigration service, not border closure (theconversation.com)

These criminals have backers in high political positions. As soon as they enter into police net, these high net-worth individuals pull the strings, call top police officers and judicial workers to bail out the criminals. The government could investigate how some arrested bandits/criminals were released, track down those who stood as surety for them and ensure they are penalized. Unless these individuals are fished out and dealt with, they will fester in their enterprise and the peace pact signed on January 25, 2020 will be in vain. In the near future, even Amotekun operatives will be compromised. They could become informants for bandits and other elements in the ring of the organized crime. Read this interview with Dr Ahmed Gumi in Daily Trust on how bandits operate based on the information given by persons in society:What herdsmen told me about banditry, how to end it – Sheikh Gumi | Dailytrust

Most bandits are on drugs, especially Indian hemp. By implication, dealers in this illicit drug know some of the bandits who patronize them. If the government would extend their intelligence network to include illicit drug dealers, it is possible to locate bandit who attacks locations and disappear like spirits, evading arrest by security personnel.  Read this story that quotes government as saying drug abuse is evident in criminality in Nigeria: Buhari, security chiefs blame heightened insecurity on drugs, influx of illegal aliens – Businessday NG . Fulani herders may be the face of the prevailing criminality in Nigeria, but they are just the tip of the iceberg. Nigeria is contending with chapters of organized crimes, and unless masterminds are captured and dealt with, our forests will continue to be forests of death.