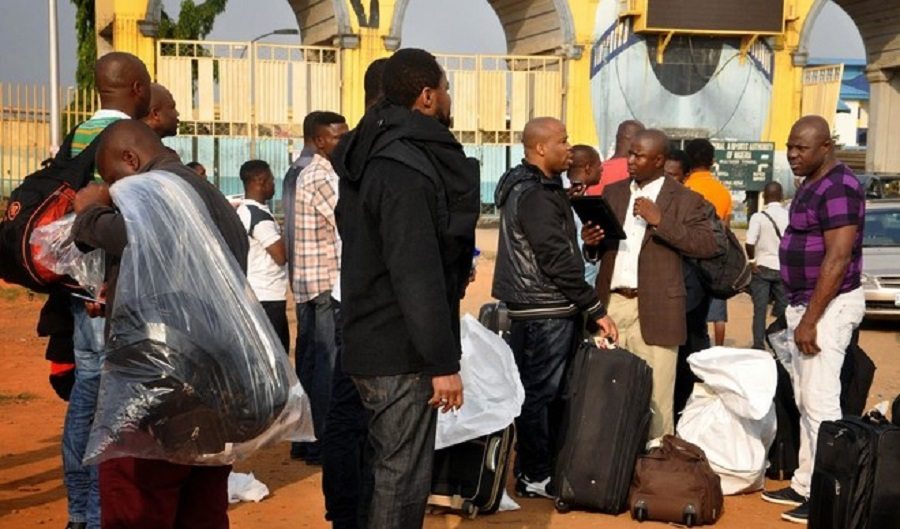 Lucy George, a development economist and former staff of the United Nations Economic Commission for Africa, is concerned about the growing number of Nigerians that are being deported from overseas.

She said the figure, about 1549 already, is embarrassing, especially when the over 100,000 deported from Cameroon are added.

In an interview with NAN, George said: “We have had an overwhelming number of Nigerians deported or voluntarily returned this year, which is embarrassing.

“The largest number of Nigerian deportees for this year comes from Cameroon, which deported about 100,000 Nigerians who escaped the Boko Haram disasters and sought refuge in Cameroon.

“That was seen to be an illegal deportation, which still is being denied by some Cameroonian officials, however, we are not including that in the embarrassing statistics.

“I am surprised by the number of Nigerians that have been deported and have volunteered to return to Nigeria from Libya just this week, as 161 people arrived on Thursday and 257 people did same on Tuesday.

“In February and May, South Africa had deported 97 and 90 Nigerians respectively in midst of the xenophobic attacks.

“We saw it to be a discriminatory at first but later realised they actually did commit immigration-related offences causing them to be deported by the South African authorities.”

Advising Nigerians to stay back and develop their country, she said: “If everyone is leaving the country for greener pastures, who is expected to remain in Nigeria to develop it? Anyone who doesn’t grow in the system will lose out when the country becomes better.

“Imagine a scenario where a young man graduates from the university then leaves Nigeria in search of greener pastures but after arriving, fails to succeed in the new land.

“He realises that things are not as fabulous as portrayed in movies as these countries have tougher systems, especially because he doesn’t meet the requirements for career jobs in their country.

“He spends time being too embarrassed and broke to return to Nigeria but finally gets deported after many years.

“In that time, he has lost the opportunity to put his education to practice, develop productive skills and has lost contact with friends who would have helped him develop himself or place him in a prominent position.

“Nigerians should learn to be hardworking and patient to see their hard work reap its benefits because riches don’t come overnight.

“The countries they are running to didn’t develop overnight so you can’t expect to comfortably reap what you didn’t sew thinking the roads are paved with gold.

“In summary, I will emphasise on the fact that there is no place like home so I hope Nigerians learn from these numerous Nigerians that have been brought back home.”

A minimum of 1549 Nigerians have been sent back to Nigeria, with the exemption of the controversial 100,000 from Cameroon.

These include a minimum of 23 Nigerians deported from Spain, 187 from South Africa, 924 from Libya, 110 from Italy, 41 from the U.S, 146 from the UK and 118 from six other European countries: Austria, Germany, Hungry, Switzerland, Norway and Denmark.