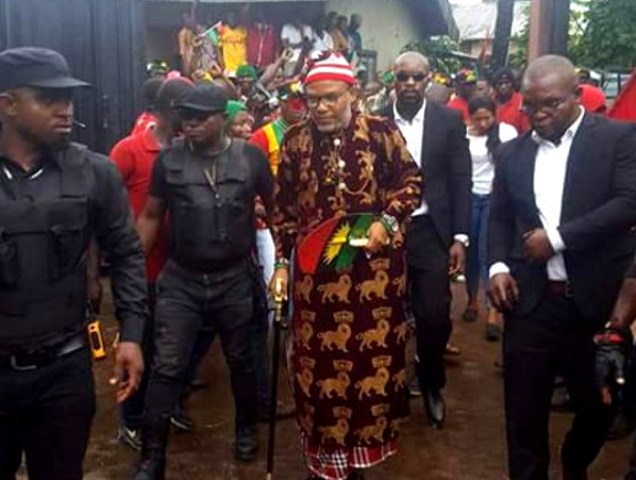 Nnamdi Kanu, leader of the Indigenous People of Biafra (IPOB), has denied allegations by the military that he is running a terrorist organisation.

In a telephone interview with Channels television on Friday, Kanu said the so-called Biafran Secret Service that he inaugurated weeks ago was a mere vigilant group.

Kanu maintained that his group does not carry arms and has never killed anyone since its formation.

“We do not carry arms; we did not ask anyone to kill for us neither have we killed anyone. If you check our record, our record is clean and straight,” Kanu said.

“How could a whole intelligence officer of the military term IPOB a terrorist group? How possible is that?

“From inception, Nnamdi Kanu made it clear to the whole world that we are non-violent freedom fighters and that’s the way it has been.”

In a statement on Friday, John Enenche, the Director of Defence Information, had listed many infractions by the IPOB, which led to its designation as a terrorist group.

One of them was the formation of a group known as the Biafran Secret Service, BSS. But Kanu said the group was never a secret service but a mere vigilante group.

“They are there to take care of our land, and that’s what it is, against attacks from the herdsmen, from criminals and all of that. We are not armed. Did you see them armed? The answer is no.”

Kanu said the group would continue its agitation within the laws of the land “to make sure that nobody will term IPOB a terrorist group”.

He also narrated how soldiers besieged his house, shot and killed 22 people and a security dog in the house and almost killed his father.

“They came to my house, that was yesterday (Thursday). Now there’s a report saying that they found some arms in Nnamdi Kanu’s house.

“They came to my house, shot everybody; they killed 22 people. They almost killed my father. They even shot our dog, the only dog we have,” he said.