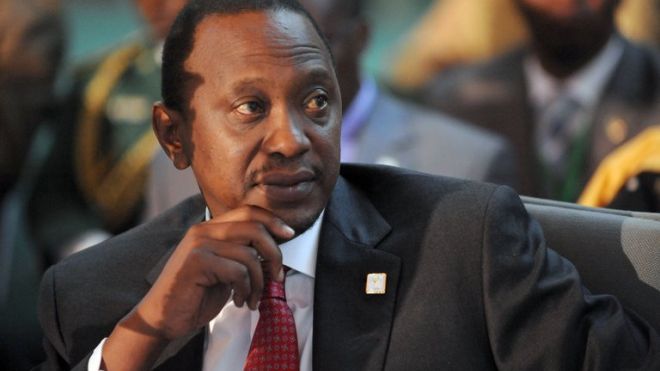 President Uhuru Kenyatta of Kenya on Wednesday became the first incumbent head of state to appear before the International Criminal Court, ICC, where he is facing charges of crimes against humanity.

The court had given Kenyatta a matching order to attend the status hearing on Wednesday, as his request to participate by video was turned down.

The 52 year old politician is accused of five counts of crimes against humanity for allegedly instigating violence that followed the country’s December 2007 presidential election.

In the violence that rocked the country from 2007 to early 2008, over 1,000 people lost their lives and hundreds of thousands were displaced when ethnic groups loyal to leading candidates burnt down homes and unleashed terror on rivals.

Kenyatta, who was loyal to the then-incumbent Mwai Kibaki during the election, is accused of funding a local militia that perpetrated retaliatory attacks.

Kenya is the second African nation after Sudan to have an incumbent president face charges at the ICC.

About 100 Kenyan members of parliament were in attendance in the various public viewing galleries for the hearing on Wednesday.

On Tuesday, before Kenyatta left for Netherlands, he invoked an article of the country’s constitution, handing over power temporarily to his deputy, William Ruto.

The temporary measure was seen as Kenyatta’s way of fulfilling the court order to appear, as he insisted that he be a private citizen during the hearing.

President Kenyatta and his deputy, Ruto were on opposing sides in the 2007-2008 violence but later formed a political alliance that won the presidency in 2013 and a majority in parliament.