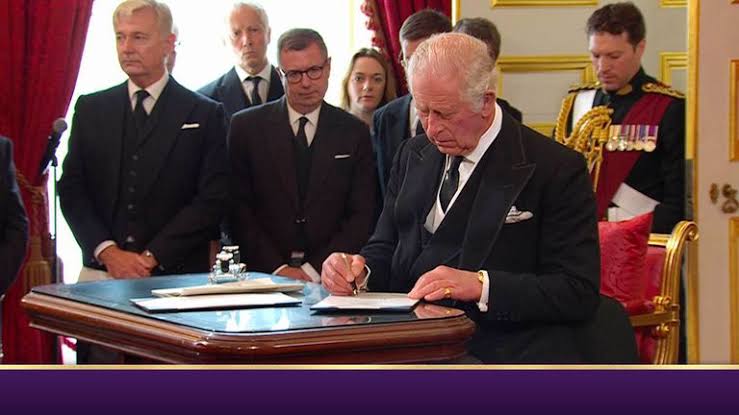 KING Charles III has been officially proclaimed by the Accession Council as Britain’s new sovereign in a historic event held at the St. James Palace in London today, following the death of his mother Queen Elizabeth II, on Thursday.

For the first time in more than 300 years, the ancient ceremony was livestreamed and the world was able to see the entire process, which had echoes of a much earlier age and was dictated by protocol.

Trumpets blared before the Principal Proclamation announcing Charles III as the new British monarch was read from the St James’s Palace balcony by the Garter King of Arms, who is the principal adviser to the monarch on all matters of ceremony and heraldry, in front of a few hundred members of the public.

“Charles III, by the grace of God of the United Kingdom of Great Britain and Northern Ireland and of his other realms and territory, King, head of the Commonwealth, defender of the faith, to whom we do acknowledge all faith and obedience with humble affection, beseeching God by whom kings and queens do reign to bless His Majesty with long and happy years to reign over us,” the proclamation read.

The proclamation was then signed by key signatories such as Prince William, who, as the new heir to the throne, was given the title Prince of Wales by his father; the council, which included Charles’s wife, Camilla, who is the Queen Consort; the Prime Minister, Liz Truss; and senior religious figures.

A most striking moment of the ceremony was watching so many senior members of British life in unison declaring, “God save the King”, as the proclamation reading ended with the Coldstream Guard playing the royal anthem, accompanied by gun salutes across the country at 11 am GMT.

The Accession Council was followed by the Privy Council held by the King, with Charles III making a series of oaths and declarations.

“I am deeply aware of this great inheritance and of the duties and heavy responsibilities of Sovereignty, which have now passed to me.

“In taking up these responsibilities, I shall strive to follow the inspiring example I have been set in upholding constitutional government and to seek the peace, harmony and prosperity of the peoples of these islands, and of the Commonwealth realms and territories throughout the world,” Charles said.

As tributes continue to flood in from around the world for the Queen, a period of national mourning has been declared until the end of the day of the state funeral.

The British government yesterday published a ‘national mourning guidance’, which carried information on flying flags, travel, and other business and public services.

It, however, said there was no obligation to cancel or postpone events and sporting fixtures, or close entertainment venues during this time, adding that it was at the discretion of individual organisations.

Gun salutes also took place across the UK, as well as in Gibraltar and Jersey, with one round fired for each year of the Queen’s life.

William and Catherine, who were also conferred with the titles of Prince and Princess of Wales, are now focused on deepening the trust and respect of the people of Wales.

Farms, cows and blood: Untold story of reprisal attacks on Fulani herdsmen in the...