Lai Mohammed did not lie; superpowers are not selling arms to Nigeria, but he overstated the fact

MINISTER of information and culture, Lai Mohammed who recently disclosed that some world powers have refused to sell weapons needed to fight insecurity in Nigeria, may have been telling the truth after all, but he overstated the fact.

Powerful countries such as the United States, Russia, France, and  China indeed continue to sell weapons to Nigeria, but the sales have been on a steady decline since the beginning of the Buhari administration in 2015.

The information minister while speaking to the News Agency of Nigeria (NAN) Forum in Abuja disclosed that some world powers had refused to sell to Nigeria vital weapons needed to fight against insurgency.

“For more than two to three years now, we have paid for certain vital weapons that they have not released to us and they even refused to give us spare parts, ” he told NAN.

The ICIR also reported the statement made by the minister.

While the claim by the information minister is not incorrect,  it is exaggerated.

Records published by Stockholm International Peace Research Institute, SIPRI show that Nigeria has ordered a total of 1, 318 from the United States, China, Germany, France, and Russia, and other countries in the last five years, but taken delivery of only 355 arms. 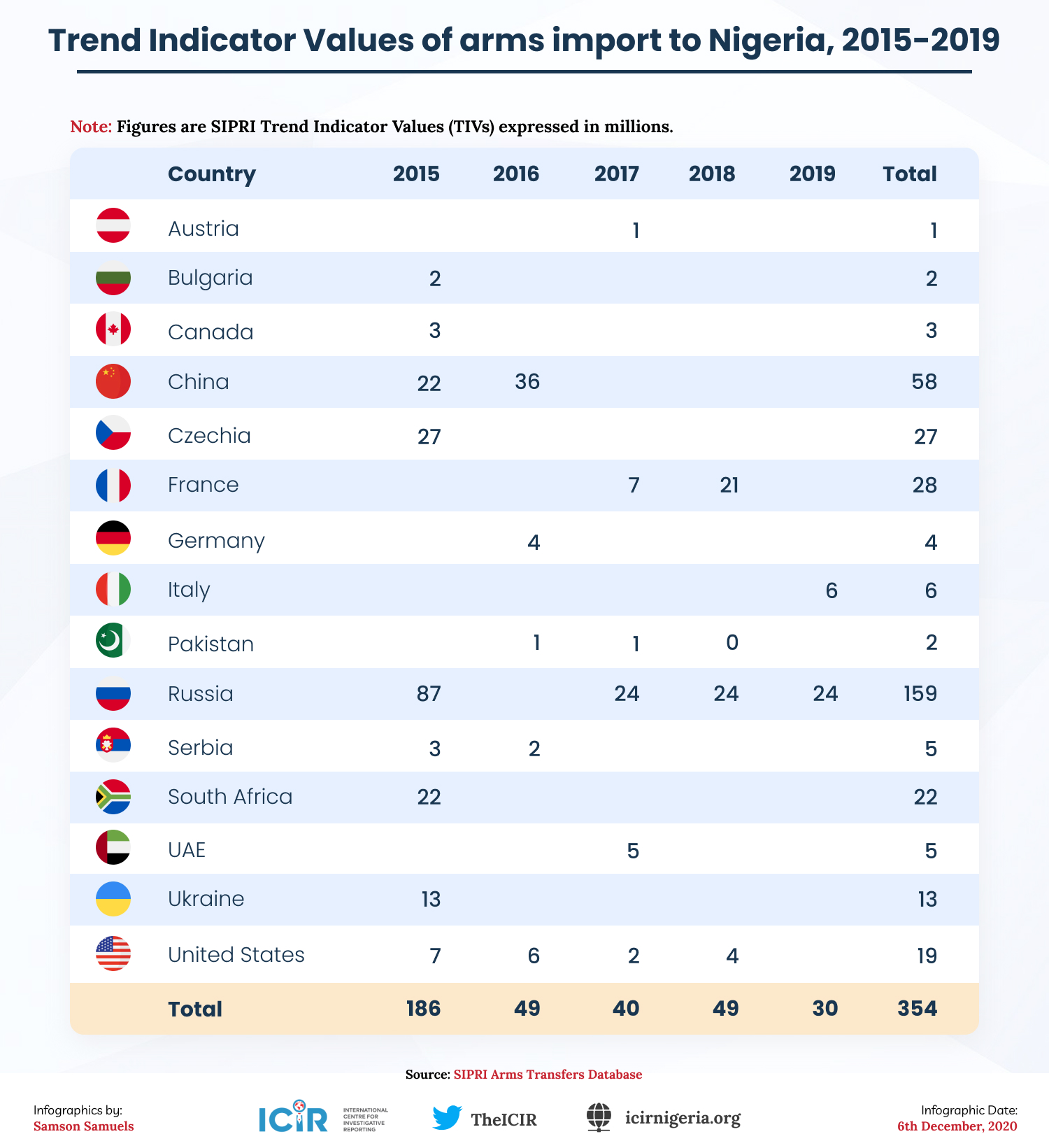 The number excludes the delivery taken at the twilight of the Jonathan administration.

SIPRI, established in 1966, is an independent international institute that collects data about conflict and armaments.

According to the Institute, Nigeria has indeed taken delivery of 19 assorted weapons from the United States between 2014 and 2019. 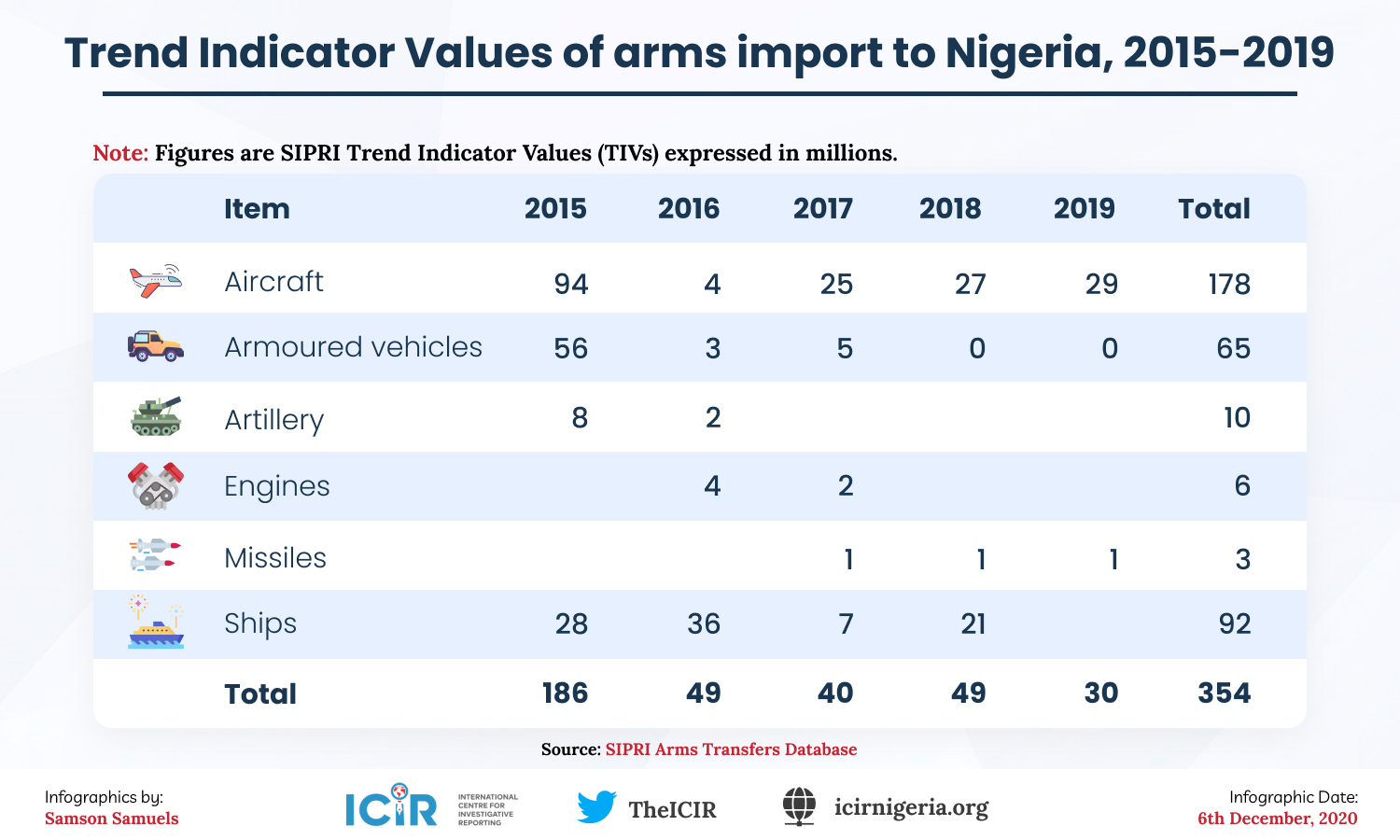 “The A-29 Super Tucano aircraft project is on track to be delivered on schedule and in accordance with the Terms of the Contract. Currently, six of the expected 12 aircraft have been produced and are presently being employed for conversion training of six NAF pilots who are in the USA, along with 26 NAF engineers, technicians, and logisticians, who are also undergoing various training on the aircraft as part of the provisions of the Contract,” the NAF said.

But the Advanced Precision Kill Weapon System (APKWS) for SuperTucano aircraft is yet to be delivered.

Indeed,  the manufacturing of some military hardware takes years to complete, the reason for pre-order.

The new aircraft, according to Air Officer Commanding Tactical Air Command (AOC TAC), Air Vice Marshal Olusegun Philip, who received the aircraft on behalf of the Chief of the Air Staff, Air Marshal Sadique Abubakar, is the second of two Mi-171E helicopters procured by Buhari administration. 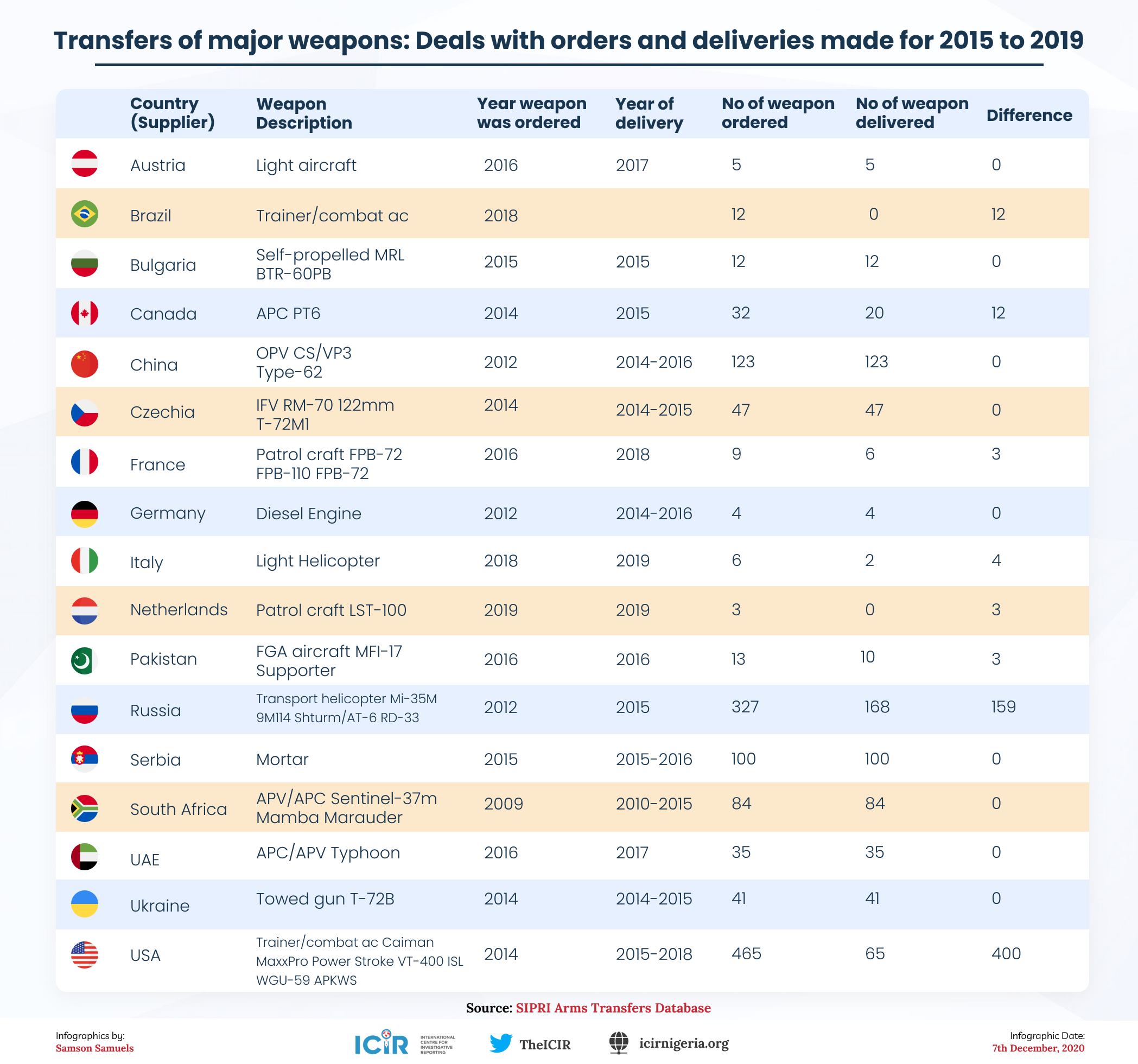 “The new delivery brings to 23 the total number of brand new aircraft acquired since 2015,” the NAF said.

The administration of President Muhammadu Buhari has also ordered nine patrol craft, FPB series, from France between 2016 and 2019, and six of them have been delivered already, according to SIPRI database.

Other countries that have sold arms and ammunition to Nigeria during the Buhari administration include Germany and Canada.

Though Nigeria is restrained free access to weapons because of its human rights records, the country only experienced a major arm embargo in 1995 during the Abacha regime. But the ban was lifted in 1999 at the return of civil rule.

The ICIR contacted the information minister on Sunday through SMS and Whatsapp for further clarification but he has not responded as of the time publishing.

Bolt, Uber drivers to embark on nationwide strike on Monday…

How elections in Chad, Benin could affect Nigeria – Report