SINCE the assumption of office by President Muhammadu Buhari in 2015, there have been several cases of the breach of the Nigerian constitution and other laws in the process of appointing public officials.

The administration has made controversial and illegal appointments, sometimes due to the vetting authorities’ carelessness, or sheer disregard for the rules and regulations. The ICIR highlights some of such appointments that have raised questions from many Nigerians.

On December 30, 2017, Buhari sent names to be appointed into the governing boards of federal government agencies and parastatals. The list contained 209 nominees for chairpersons and 1,258 for board membership positions. However, eight of them are dead persons.

One of the individuals was the late Christopher Utov, a Reverend, appointed as member of the Nigerian Institute of Social and Economic Research. Utov, the proprietor of Fidei Polytechnic, Gboko, passed away since March 17, 2017, nine months before his appointment.

The President also appointed Donald Ugbaja, a former Deputy Inspector General of Police, DIG, of the Nigerian police as a board member of the Consumer Protection Council (CPC) but Ugbaja had passed away several months before the appointment.

Francis Okpozo was also appointed as Chairman of the Nigerian Press Council.He was a senator in the Second Republic but had died on December 16, 2016.

In a country of almost 200 million, the president appointed nine dead persons in three years. 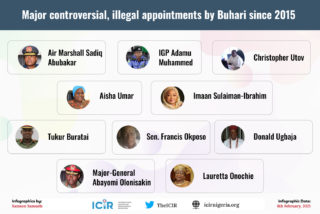 Earlier in October 2020, during a Senate Plenary, Ahmed Lawan, the Senate President, read a letter from Buhari nominating Lauretta Onochie as a state commissioner for the Independent Electoral Commission (INEC).

Onochie, who is a current Special Assistant on Social Media to Buhari, had on multiple times,demonstrated blatant partisanship and her affiliation for All Progressives Congress (APC), The ICIR had reported.

Buhari made this nomination against the constitutional provision of the 1999 Constitution of the Federal Republic of Nigeria as amended.

According to the Nigerian Constitution, Paragraph 14 of Part 1 of the Third Schedule as amended, Section 30, Act No 1 of 2010,  a member of the Independent National Electoral Commission “shall be non-partisan”.

Breach of Agencies Act and illegal extension of tenure

In October 2020, President Buhari violated the establishment Act of the National Pension Commission (PenCom) by nominating a Director-General of the Commission from a different geopolitical zone.

The President sent a letter seeking confirmation of Aisha Umar as the DG of PenCom following the suspension of the former DG Chinelo Anohu-Amazu before her tenure elapsed.

Against the President’s action, the PenCom Act of 2014, part (5), section 21 (2) states clearly that “In the event of a vacancy, the President shall appoint a replacement from the geopolitical zone of the immediate past member that vacated office to complete the remaining tenure”.

Umar went on to become the PenCom Director-General against the establishment Act of the agency.

Apart from Umar’s appointment, THE President recently extended Mohammed Adamu’s tenure by three months despite the completion of his term as the Inspector-General of Police (IGP).

The extension was made in violation of the 2020 amended Police Act, signed into law by Buhari in September.

The Act says the service of any police force personnel shall end when it reaches the retirement age of 60 years or 35 years of service.

As earlier reported by The ICIR, Part 111 Section 7 (6) of the Act, repealed the Police Act Cap. P19, Laws of the Federation of Nigeria, 2004, prescribing a four-year single tenure for a person appointed to the office of the IGP subject to the provisions of clause 18 (8), which stipulates that every police officer shall, on recruitment or appointment, serve in the Nigeria Police Force for a period of 35 years or until he attains the age of 60 years, whichever is earlier.

Femi Falana, a Senior Advocate of Nigeria (SAN) and Human Rights lawyer, said Buhari breached the Armed Forces Act by extending the Nigerian service chiefs’ tenure who recently resigned. Before their resignation a few weeks ago, Buhari extended their tenure despite reaching 60 or completing their 35 years of service.

Falana added that against the President’s action, the extension of tenure is not contained in the Armed Forces Act.

“Under the public service rule, under the harmonised rules for military officers in Nigeria and under Section 6 of the Armed Forces Act, which empowers the President to make rules and regulations for the military, there is no provision for extension of tenure (for Service Chiefs) beyond the period stipulated by law.

“It has been done in the past, but that does not make it right. There is equality before the law, so you can’t extend the service of certain officers while you ask others to go after 35 years of service or the attainment of 60 years of age,” Falana said.

On December 1, 20020, Garba Shehu, the Presidential spokesperson announced that Buhari had approved Imaan Sulaiman-Ibrahim’s appointment as the new Director-General of the National Agency for the Prohibition of Trafficking in Persons (NAPTIP). However, Sulaiman-Ibrahim does not possess the required qualification to hold the position.

Suleiman-Ibrahim does not have any record of attaining the director cadre in Nigeria public service as she had never held a major office in the country’s civil service. Still, she was appointed against the stipulation of the law.

According to the NAPTIP Act, the agency’s DG shall be someone of the director cadre in the Nigerian public service or its equivalent in any law enforcement agency.

“There shall be for the agency a Director-General who shall be from the Directorate cadre in the public service of the Federation or its equivalent in any law enforcement service and shall be appointed by the President on the recommendation of the Minister,” the section 8 (1) of the NAPTIP Act 2015 reads.

While there have been divergent views on appointments made by the president, some have in the past accused him of making ‘lopsided appointments’.

Abubakar Umar, a retired Army colonel and former military governor of Kaduna State, had warned Buhari about giving undue preference to some sections of the country over others in national appointments.

Doctors vow to continue strike as FG fails to convene…