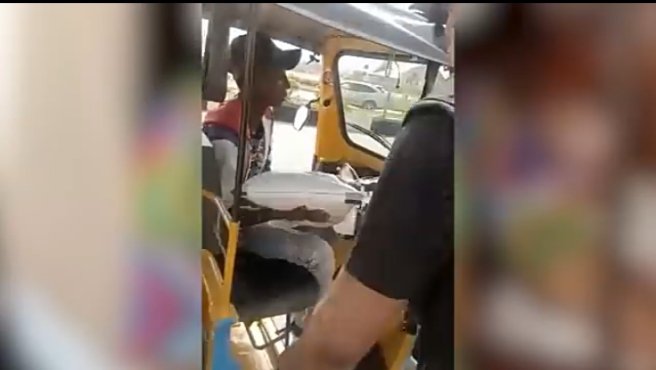 MIXED reactions have greeted the action of a man believed to be an officer of the Nigerian Police Force who was seen sharing bags of rice to commuters in a viral video on social media.

In the video reviewed by The ICIR, the yet to be identified man was seen putting on a jacket that bears the inscription of ‘IRT’, an abbreviation for the Intelligence Response Team of the Nigerian Police.

Before handling the rice, the officer was also asked the commuters, who were in a yellow tricycle, how they celebrated their Christmas.

“How was your Christmas?” He asked.

“Hope you enjoyed it very well?” He added.

He told them he was not there to collect bribes but to give them a token to celebrate the coming new year.

The amazing commuters took their turns to pray for him and wish him well.

The policeman’s unusual gesture has since generated mixed and hilarious comments from Nigerians on Facebook.

While some praised the officer for his act, some said he was only doing it to save the battered image of the police.

Others also said he was doing it to emulate officers of the New York Police Department that were seen giving out $100 notes to commuters in New York a few days ago.

“Policemen have now turned to Father Christmas in our roads.We pray the human face should extend beyond this sharing of money and rice. especially the way they deal with civilian populace,” wrote Prince Aromeh.

“The police forces has never been good for ones. They ain’t good people. Don’t be moved by the video. We are not in America,” said Collins Segun Ojela.

“Since the day Nigerian police saw American police given out $100 each on social media to the citizens during this festive period our own police quickly copied it anyway it’s good development let them keep it up copied the rule of law too,” Aderemi Agbabiaka.

“We need love , kindness and generosity towards one another . This only way for us to rebuild a nation destroyed by greedy political class..love and again love,” wrote Federick Barbarossa.

The Nigerian Police have a long history of extortion and harassment of citizens. Still, some commentators believe that gestures like that of this officer could rebuild trust and restore confidence to members of the public.