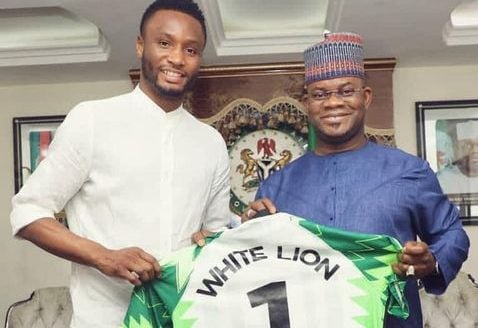 THERE are mixed reactions over the endorsement of Kogi State Governor Yahaya Bello by former Super Eagles Captain Mikel Obi.

Obi had paid a courtesy visit to the governor on Sunday and stressed the need for the involvement of Nigerian youths in leadership activities within the country.

He applauded Bello’s achievements in Kogi State regarding security, healthcare and agriculture while pledging his support for the political aspirations of the governor.

“My main aim is to come here to show my appreciation and to thank him for all the things he has been doing for the people and also to support him in whatever future political positions he wants to go into,” Obi said.

Bello has declared his interest to contest the 2019 presidential election on the platform of the All Progressives Congress (APC).

Several Nigerians, however, have expressed displeasure over Obi’s statements.

Facebook user Oshk Fela Castro advised the footballer to stay focused on his career and avoid interfering in political affairs.

“Politics in Nigeria is not Premier League so Mikel should face his career,” he said.

Another Facebook user Ilemona Abraham warned against losing the goodwill of the people presently being enjoyed by the footballer.

“John Mikel Obi, we the Nigerian youths love and admire you. Don’t loose this by endorsing Loose-cannons for a political office in Nigeria. I want to presume you’re not after money from Yahaya Bello, because you’re well made in life,” he said.

Reacting to Obi’s statements, a Twitter user @paulo4gud described Obi’s statements as heartbreaking, adding that people were dying at the governor’s hands due to bad governance.

“Outsiders think Bello is doing well in Kogi state not knowing my people are dying in the hands of Bello because of his bad government. Obi fall my hand big time. Seeing this breaks my heart,” he said.

Despite general displeasure, some social media users have stated that the footballer was entitled to his choice of a presidential candidate.

Replying to the post by Fela Castro, a Facebook user Gideon Ogunniye urged Nigerians to be more tolerant of dissenting opinions.

“Let’s learn to tolerate dissent. In a democracy, people should be free to make their choices without any form of intimidation or harassmrnt. Mikel hasn’t broken any law by associating with Yahaya Bello,” he said.

On Twitter, @cedonation expressed his delight at Obi’s support for Bello’s ambitions.

“John Mikel Obi has seen the light and has decided to associate with it. Without mincing words, Yahaya Bello is fit and capable. 2023 should be a Youth for Youth thing, and watch how Nigeria will be great again,” he said.

The Kogi State governor is alleged to have been involved in fraud.

The ICIR reported allegations of money laundering against the governor by a group in Kogi State, Anti-Corruption Network.

According to the report, the People’s Democratic Party (PDP) had urged the EFCC to investigate the allegations and called on Bello to speak to the allegations.

The ICIR also reported Bello’s refusal to take the COVID-19, stating that he did not need the vaccine as he was 100 per cent healthy.

Nigerians wonder how the country would look like if another pandemic breaks out under Bello’s watch as president.