Nigeria-China loans: This is my story 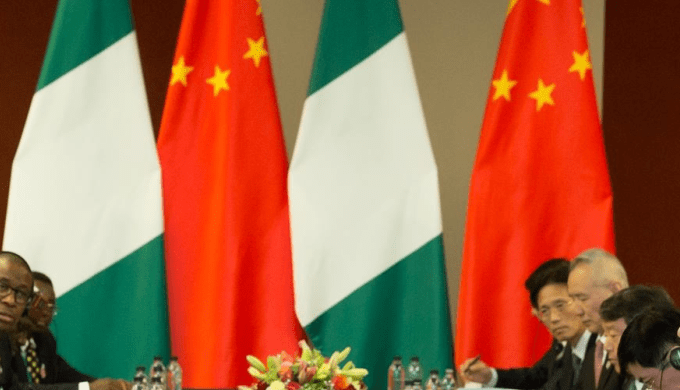 A hot and deadly arrow flying across Nigeria over Chinese loans hit my heart and mind last Friday, destabilizing my weekend, and leaving me with bleary eyes. The arrow was very devastating because, like every victim of misfortune, I did not forecast it.

As the debate on the sovereignty clause in Chinese loans raged on among the Minister of Transport, Rotimi Amaechi, National Assembly and Civil Society groups, my initial concern was how to access the contract documents and do a forensic linguistic analysis of their terms and conditions, provide their implications, and publish my findings on my blog. From my studies, I have come to realize that in analyzing legal language, it is not enough to examine the letter. Many other extra-linguistic factors would need to be taken into consideration, like societal perception, previous experiences, examples from other parts of the world, and the like. A combination of these factors would determine whether or not Chinese loans are a time-bomb for the country.

As I drove down to work on Friday last week, I received an alert. Not for a cash deposit in my account. It came from an Agence France Presse (AFP) journalist in Nigeria. The AFP is a reputable global news agency with headquarters in Paris. The text message said I was being fact-checked over Nigeria-China loans. Really? My heart jumped into my mouth, as I wondered what I had to do with Chinese loans. In my two-decade career as a journalist, I have written bales of stories, but very few sheets about China. In the last few weeks, I have been contemplating on writing a series on my blog about how China shook off the cloak of poverty, became so prosperous that it has sent jitters down the spines of Americans. With the series, I wanted to contribute ideas to how Nigeria and Africa could emancipate. But, now I was being fact-checked!

As soon as I set up my laptop on my desk, I put a call through to the journalist. Anxiously, I wanted to know how I attracted the attention of the global news organisation to the extent of being fact-checked.

“A story you wrote about Nigeria-China loan in 2018 is trending, and we have discovered that your data was wrong,” he began.

“What story?” I wanted to know.

Like a deluge, I experienced an instant convergence of multiple information in my head, linking my 2018 piece with the debate about Chinese loans. But I was pleasantly shocked that the old story was trending, reminding me of the efficacy of a concept in cyber-security, which says any information uploaded on the cyberspace is permanent. At the same time, I felt my past had come to haunt or hunt me. As an apostle of critical journalism, I may have posted a lot of stories on the Internet; enough for my enemies to access and to use them in hanging me on the gallows. I had been fact-checked by local news organisations previously, but on both occasions when I was put in the dock, I was found ‘Not Guilty.’ What would happen to me this time around?

“I can’t remember the exact contents of the story,” I confessed to the AFP journalist. I would need to read it to know what to defend.”

Impatiently, he told me the Debt Management Office (DMO) data showed that Nigeria’s debt to China as at last week stood at $3.1 billion, but that my analysis in 2018 claimed that Nigeria was indebted to China to the tune of $9.1 billion.

I began to choke, gasping for breathing and words to respond to this information that contradicted my story. As our conversation lingered, the editor of an online platform, which had republished my analysis, called me to say I had put the medium in a difficult position because their platform was being fact-checked. Ironically, that online medium prides itself as a fact-checking news website, so the atmosphere, to it, was akin to a judge being put in the dock. Cold guilt enveloped me, but my instinct said I should return to my analysis and look at it critically.

This is my case

Fortunately for me, my guardian angel was at work! My story said Nigeria had received $3.1 billion as development aid from China between 2002 and 2012. Its first paragraph contained a caveat, saying countries could be tied to the apron-string of States that grant them development aid, especially if such benefactor-countries kept the record of such generosity and flaunt it. China does exactly the same thing. Also, at the time I wrote the analysis, an international news agency reported that Nigeria was indebted to China to the tune of $6 billion infrastructure loans. Saying development aid was a loan in kind, which Nigeria must pay back through inexplicable means in kind, I put the figures together and argued that Nigeria would be indebted to China to the tune of $9.1 billion. I multiplied the figure by the forex rate and divided it by Nigeria’s population to arrive at N15,000 debt per Nigerian.

The media have been awash with pro-China opinions and analyses in the last one week, praising the loans as low-hanging and easy to obtain, and clapping hands for China

After explaining these to my colleague, he insisted I was wrong because I didn’t use DMO data. I put up a defence – it is not only DMO that keeps data. And I spoke from my experience as a data journalist. Over the years, I had obtained credible data about Nigeria from the databank of research organisations in the West. For instance,I had done a big story about Nigeria’s defence expenditure from a website called UJAMA, which kept data of all arms transactions by countries across the world. Nigeria’s health data could be accessed on the World Health Organisation (WHO’s) website, not necessarily that of Nigeria’s Ministry of Health. To obtain the profits or taxes paid by foreign companies operating in Nigeria, one may need to consult the websites of their parent- countries’ Securities and Exchange Commission. Though data gathering is mounting in Nigeria, one may still need to consult specialist databank while carrying out the investigation.

My friend insisted I was wrong, and in a jiffy, my analysis was condemned as misinformation. Misinformation is defined as “false or inaccurate information, especially that which is deliberately intended to deceive.” I examined my bone marrow to find out if I had used the analysis to ‘deliberately deceive’ my readers.

Frankly, I admired the reporter for his enthusiasm, tenacity and courage because those are attributes of an investigative journalist. But his courage threw a spanner into my work. My beautiful weekend was contaminated, as I suffered insomnia, wondering why I goofed so badly that a junior colleague brilliantly uprooted my self-confidence. All through Friday, Saturday, Sunday and Monday morning, I brooded over my 300-word analysis being discredited as misinformation.

On Monday morning, I received an unexpected call from another news platform which had republished my analysis. The editor drew my attention to the fact-check by AFP, and was alarmed that the story on its website had been flagged by Facebook as ‘Fake News’.My hairs rose and stood straight; my predicament worsened. Yes, I was drowning! No, I would have to re-scrutinize my story to know how I goofed before I would accept to fall flat in defeat. I dug into the Internet, deliberately to look for multiple sources of data that discredited or supported the data I relied upon for my analysis in 2018. And the place to go was not DMO, which claimed Nigeria’s debt to China is $3.1 billion. 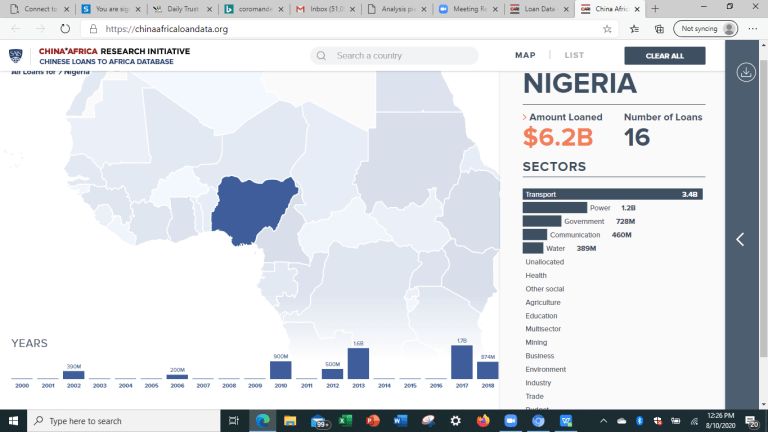 John Hopkins University’s China-Africa Research Initiative (CARI) came to my rescue. This website said the initiative “is a research programme dedicated to understanding the political and economic aspects of China-Africa relations.” It further describes itself thus: “SAIS-CARI is focused on producing and promoting high quality, well-researched, and data-backed analysis of the relationship between China and African countries. It also specializes in conducting evidence-based analysis, fostering collaboration, and training future leaders to understand the economic and political dimensions of China-Africa relations and their implications for human security and global development.” As the table would show, Chinese loans to Nigeria from 2002 to 2018 was $6.1 billion. It was this figure that I quoted in my analysis, which AFP claimed was misinformation. The table shows the years, the sectors, the amount and even the specific projects for which the loans were taken. Perhaps, between 2018 and 2020, Nigeria had paid back part of the loans, hence the outstanding debt stood at $3.1 billion in 2020. But as of 2018, John Hopkins’ data said Nigeria owed China as much as $6.1 billion. Those interested in the subject-matter could probe further. 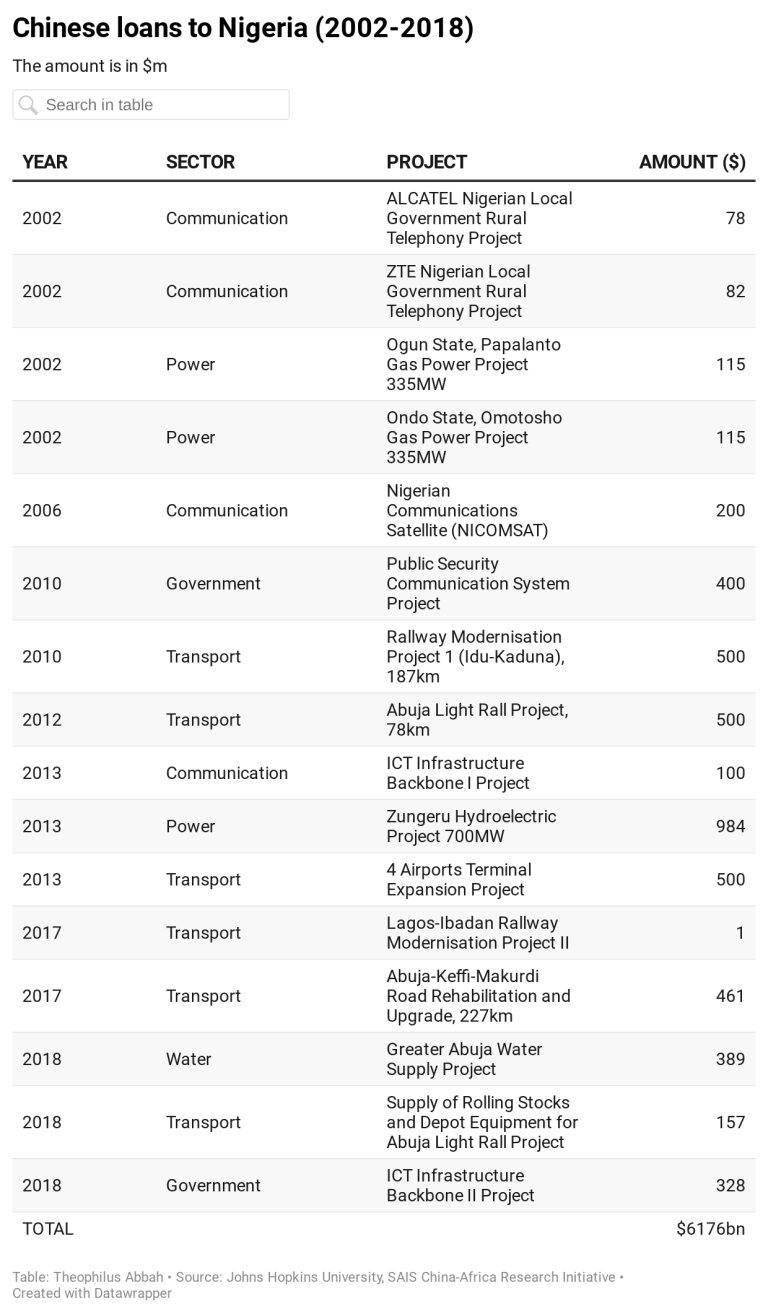 ‘China got contracts worth $41.2 billion in Nigeria’

The website contains other interesting data about contracts executed by the Chinese in Nigeria between 1998-2017, which is put at $41.2 billion. This is to say, China, as of 2018, won contracts, the value of which was seven times the loan it got from Nigeria. But if we go by DMO’s data, the figure is about 13 times the contracts Nigeria awarded to China or Chinese companies. Data on Chinese aid to Nigeria remains frozen, as John Hopkins University does not provide its breakdown country-by-country. As I have remarked consistently, the data are not those of DMO, but John Hopkins is a credible organisation; it is quoted and relied upon for alternative data even about the current COVID-19 pandemic.

China’s policy on Africa is hinged on eight cardinal principles, as announced by Zhou Enlai in China Daily on August 13, 2010. It reads thus, “China always bases itself on the principle of equality and mutual benefit in providing aid to other nations; China never attaches any conditions or asks for any privileges; China helps lighten the burden of recipient countries as much as possible; China aims at helping recipient countries to gradually achieve self-reliance and independent development; China strives to develop aid projects that require less investment but yield quicker results; China provides the best-quality equipment and materials of its own manufacture; in providing technical assistance, China shall see to it that the personnel of the recipient country fully master such techniques; the Chinese experts are not allowed to make any special demands or enjoy any special amenities.” These are very interesting and seemingly harmless. Like every ideal, if these principles are adhered to, China and African that receive its loans would dance and sing songs of joy from Egypt to South Africa. But we are still waiting to read the success stories of African countries who have benefited from Chinese development aid and cheap loans. 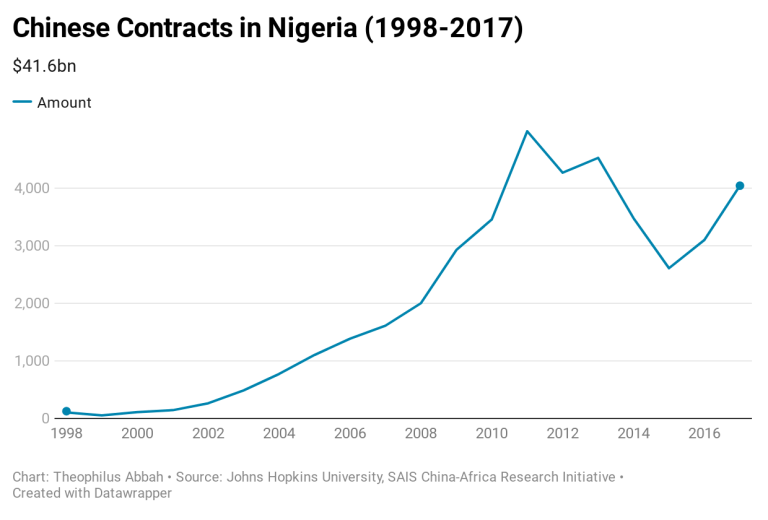 Rise and Rise of Chinese contracts in Nigeria

The media have been awash with pro-China opinions and analyses in the last one week, praising the loans as low-hanging and easy to obtain, and clapping hands for China because it charges interests that as low as 2.5 percent and 3.5 percent on a long-term basis. The loans are supposed to have facilitated infrastructural development in Africa, like Nigeria, which has channelled Chinese loans into the renewal of airports, railway, roads, telecommunications and the like. However, they are prone to misuse and have promoted corruption and fight for power in African countries. For this reason, the National Assembly and investigative journalists would need to revisit the state of infrastructural projects finance through loans from China to find out if they are yielding the desired returns to repay those advances.

Passing judgment in my own case, I’m glad to say, I’m not a purveyor of misinformation.

As rainstorm wrecks havoc in Kwara, many residents remain stranded despite…

As rainstorm wrecks havoc in Kwara, many residents remain…