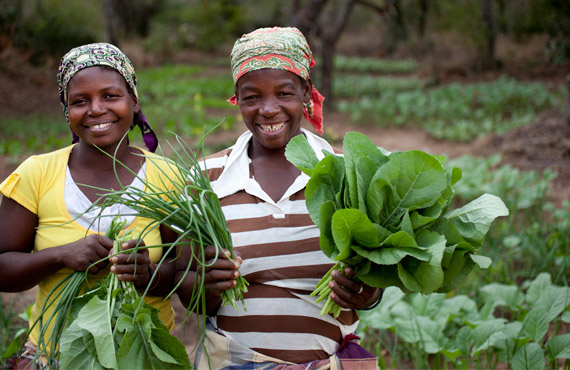 The international humanitarian organization, Oxfam, says funding levels for agriculture and climate change adaptation by the Nigerian government are significantly lower than promises.

In a report titled, “fine words do not produce food,” presented in Abuja on Wednesday, Oxfam lamented Nigerian government’s vision of economic transformation through agriculture which has no focus on small-scale farmers.

It says money is skewed toward larger scale projects and research.

The report was a policy brief on the impact of investment in agriculture and climate change adaptation on small scale farmers in Nigeria between 2010 and 2015.

“With adequate support, small-scale farmers throughout Nigeria could overturn rampant malnutrition and move the country toward food security,” said Constant Tchona, Country Director of Oxfam in Nigeria while presenting the report.

“But as the Nigerian proverb goes, ‘fine words do not produce food.

“The government is pursuing a vision of economic transformation and commercialization with agriculture at the centre, yet small-scale farmers are not the focus of investments”.

He explained that “the support that small-scale farmers need is straightforward—ranging from fertilizer to market access to climate change adaptation strategies—and the Nigerian government must escalate investments to deliver these vital resources.”

Tchona said Nigerian government should increase spending in the agricultural sector to at least 10 percent of the national budget.

He lamented that agriculture share of national budget between year  2010 and  2015  ranged between 0.9% and 1.8%; with a mean share of 1.5%, adding that  it was way below the benchmark of 10% of national budget annually stipulated at the Maputo declaration of 2003.

He quoted from the policy brief, that “Nigeria received a total sum of $2.22 billion  Official Development Assistance (ODA) between 2014 and 2015 from foreign donors to increase investment in agriculture”.

The Deputy Country Director  explained further that ODA to agriculture fluctuated between 2011 and 2015, while  health and education sectors received largest shares of ODA, stressing that agriculture had 0.08% of the ODA disbursed to Nigeria‎.

“As a matter of urgency, the government in partnership with donors should work toward boosting dedicated climate adaptation funds in the agricultural sector to match investments in other African countries,” he said

‎He added that the government should redirect investments to align with the needs of smallholder farmers, especially women farmers who face additional constraints in accessing agricultural inputs and extension services.

His words: “Farmers need support to ameliorate the high cost of fertilizers, machinery, water pumps, and other resources.

He also urged the government to enact policies to scale up private sector involvement noting that public-private programs that have demonstrated success in enhancing food production.

“Providing a ready market for products should be sustained and improved to support smallholder farmers. These programs should consider conducting a needs assessment to provide the kinds of inputs, credit programs, and timely delivery that farmers need,” Tchona said

Tchona said despite the fact that Nigeria was ranked  as the world’s fourth most vulnerable country to  climate in 2015 which has brought additional uncertainty and risk to Nigeria’s ‎small scale-food system, Nigeria has not benefited from multilateral climate funding because it has not established a sufficient instistitutional framework to access funding.

He emphasised that the financing to support ‎climate change adaptation was drastically below expectations, as Nigeria only  received  $15 million in funding from multilateral institutions.

‎Tchona stressed that Nigeria’s population size is about equal to the combined populations of the six countries receiving the largest share of multilateral climate adaptation funding- Niger, Tanzania, Mozambique, Zambia Mali and Uganda, saying these countries have received a combined of 47 times the amount of finance for adaptation as the population of Nigeria.

‎The Deputy Country Director said recent estimates suggest that in the absence of adaptation, climate change could result in losses of between 2% and 11% of Nigeria’s GDP by 2020, adding that these loss estimates are projected to range between 6% and 30% by the year 2050.