IN May 2016, barely a year after the commencement of his first term in office, President Muhammadu Buhari in London committed Nigeria to joining Open Government Partnership initiative.

Two months after the promise, Nigeria formally became a member by signing the OGP agreement. But since then, there has been no significant improvement in the transparency and accountability level of public institutions under Buhari.

The majority of government agencies instead operate well under the radar, making deals worth billions of dollars away from public scrutiny, as the media have reported.

And even when the Freedom of Information Act is invoked to obtain access to public records, many Ministries, Departments and Agencies (MDAs) do not comply.

According to the FOI ranking carried out by Public and Private Development Centre among 187 public institutions, over a hundred agencies of government neither disclosed information proactively nor responded to FOI requests in 2018. In fact, only 12 agencies had a good record of FOIA compliance, the rest were either poor or worse.

In the previous years, the records were as woeful.

Section 29 of the FOI Act mandates every public institution to submit its annual report on or before February 1 of each year to the Attorney General of the Federation (AGF) on all applications of FOI request they received.

But only 73 out of 900 public institutions submitted the report in 2017, representing only 8.1 per cent compliance with the provision of the act.

In 2016, over 90 per cent of the MDAs violated Section 29 that mandates submission of the report on every February 1.

That year, The Guardian sent FoI requests to 50 agencies asking for documents/records that show that submission of the report on February 1 had been complied with in addition to the trend of compliance since May 28, 2011, when the FOI Act was promulgated.

Within seven days of the receipt of The Guardian’s application (as required by the Act), only four agencies replied, while two others called to ask for re-routing the application to ‘appropriate units’.

Secrecy around public bookkeeping in Nigeria

In July 2018, The ICIR on behalf of LeaksNG sent FOI requests to a number of government agencies, asking for detail of stamp duty remittances by Deposit Money Banks and other financial institutions.

Banks and other financial institutions since January 2016 have been mandated to charge their customers N50 on every transaction from N1000 and above in accordance with the provision of the Stamp Duty Act of 2009.

This remittance, according to unverified reports, has reached N20 trillion, but the details of the collected fund are shrouded in secrecy.

The LeaksNG, a coalition of Nigerian newsrooms, acting on a tip-off that some powerful individuals may have been siphoning the fund for personal use, wanted to know where the money is kept and thus started to ask questions.

Letters were sent to the Central Bank of Nigeria (CBN), Office of the Secretary to the Government of the Federation (OSGF), Nigerian Postal Service (NIPOST), and the Nigeria Inter-Bank Settlement System (NIBSS) PLC.

But none of the agencies provided the information requested.

The OSGF denied having information about the fund despite that it was fingered as one of the agencies that formulated the policy. It rather advised that the FOI application be directed to the Federal Inland Revenue Service (FIRS).

“The Office is of the view that the Federal Inland Revenue Service (FIRS) has a greater interest and is the custodian of the information sought and therefore would be in a better position to provide same,” the acting legal adviser at OSGF, J.O Obule, wrote in a letter dated 9th August 2018.

But FIRS, in its response, would later shift responsibility to Nigerian Postal Service, NIPOST.

“We regret to inform you that FIRS does not collect Stamp Duties from NIPOST. Therefore we ask that the above request be directed to NIPOST,” Ike Odume, the FIRS Director of Legal Services, the FIRS wrote in a letter dated 5th November 2018.

Also, when NIPOST eventually responded on the 19th November 2018, nearly four months after the request was sent, it wrote “…There was never a stamp duty revenue collection account by NIPOST between 2010 and 2016…

And the CBN, in a letter dated 6th November 2018 and signed by Mrs R.J Monguno, put paid to the FOI request.

“The information you requested is a subject matter of a suit before Supreme Court of Nigeria and is therefore subjudice,” she wrote.

Till date, none of these government agencies has further provided information about the stamp duty contributed by millions of Nigerians, even after their disregard was made public. 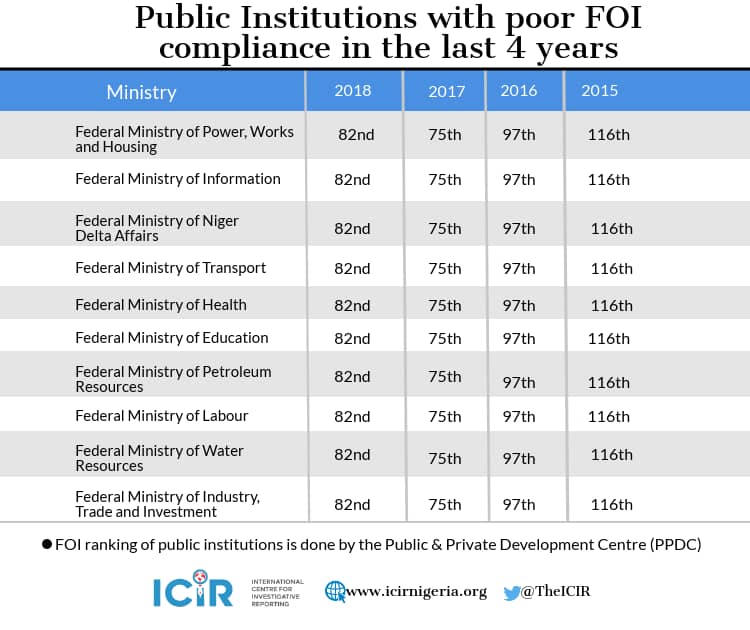 One of the agencies that have little or no regards for the freedom of information law is the Code of Conduct Bureau. The agency keeps a written declaration of all public officers concerning their properties, assets and liabilities, and those of their spouse (if not a public officer. In 2018 the agency is ranked among the worst in FOIA compliance by PPDC.

The ICIR on January 16, requested the Bureau to provide details of assets declared by all cabinet members in the Buhari administration. But it wrote back after a month declining to grant the request because, according to the letter, the term and conditions for such request have not been yet prescribed by the National Assembly. The letter further states that FOI law has exempted the assets declaration of public officers.

A week later, Saturday PUNCH newspaper made a similar request and was turned down for the same reason.

The Bureau gave a similar insipid response in October 2015 when a civil society group,  the Advocate for Peoples Rights and Justice, filed an FOI request demanding the assets declaration forms of the heads of both the CCB; the Code of Conduct Tribunal; and Nasir El-Rufai, the governor of Kaduna State (while he was the FCT minister)

Though The ICIR has instituted a court action against the Bureau, it is yet uncertain how long the process will last.

Another notorious violator of FOI is the Nigerian National Petroleum Corporation (NNPC). Human rights activist lawyer, Femi Falana, SAN in March 2018 requested the corporation to provide information on the amount of money spent on petrol subsidy and turnaround maintenance of refineries.
But the NNPC, despite that the federal government has a controlling interest in it and it is utilising public funds to provide public services, declined to make the information public.

The response goes thus, “We regret to inform you that the NNPC is not in a position to provide any information or document as your request is incongruous with, unsupported by or outside the scope and purview of the Freedom of Information Act. Be informed that the FOI Act is not applicable to the NNPC because it is not a public institution within the meaning of Section 31 of FOIA.”

A pro-democratic civil organization, Anti-Corruption and Integrity Forum had also unsuccessfully requested the NPPC to provide information on crude oil swap and offshore processing agreement (OPA). The case has been in court since 2017.

The Deputy Director FOI Unit Federal Ministry of Justice, Benjamin Okolo, whose office coordinates the implementation of FOIA, has at public function described the situation as “unfortunate”. But he also confessed that there was nothing his office could do to make the agencies show greater transparency since the law does not prescribe how defaulting institutions should be sanctioned.

Ironically, the Ministry of Justice, mandated to monitor FOIA compliance, has also denied response to FOIA request made by The Cable Newspaper Journalism Foundation (CNJF). The online paper requested information on the engagement of lawyers for the recovery of stolen funds by Sani Abacha, a former military ruler.

The Cable Foundation had written to the office of the AGF in respect of a report on the repatriation of $321 million stolen by Abacha, asking to know why the office of the AGF hired another set of lawyers to do a job that had already been completed by Erico Mofreni, a Swiss lawyer engaged by Nigeria since 2000. It also requested a copy of the 2014 agreement that led to the withdrawal of the prosecution of Abacha’s son, Mohammed.

But the ministry stonewalled until the matter is taken to the court on 10th January 2018.

Former President Goodluck Jonathan signed FOIA bill into law on 28th May 2011  with the expectation that law would promote transparency and accountability in government, giving citizens access to public records and government. But the law has since then remained a paper tiger. And with the signing of OGP by President Buhari, Nigerians were optimistic that the initiative would encourage the implementation of FOIA; that change is yet to happen. Rather the government continues to operate in secrecy that makes it difficult for the Nigerians and the press to join anti-corruption fighting machine of Buhari administration.

The Acting Director-General, Bureau of Public Service Reforms (BPSR), Mr Dasuki Arabi said: “The denial of access to information and attendant widespread ignorance in the society does more harm than any harm that could possibly arise from granting access of information to members of the public.”

But the message is yet to gain the attention of public servants working in Buhari government, therefore making the operation of the present administration yet opaque, despite the public pledge of the president three years ago in London.

A LEBANESE engineer has been kidnapped by gunmen in Owo, the headquarters of Owo...

THE United Nations Educational, Scientific and Cultural Organization (UNESCO) is seeking partners for the Global Media...

TWO hundred and eight-five people have died due to insecurity in the last five...
Advertisement

Chat us on WhatsApp
Advertisement
Previous articleAbacha Loot: UK withholds £211 million stashed in late Nigerian dictator’s account
Next articleFACTCHECK: Bayelsa govt claims it is least indebted in South-South, but that is false