Special reports
By Odinaka ANUDU and   Harrison Edeh On Apr 8, 2021

THE Nigerian National Petroleum Corporation (NNPC) has gambled $1.5 billion on the financially battered Port Harcourt Refinery Company (PHRC), signing a contract with an Italian firm Maire Tecnimont S.p.A for the rehabilitation of the inefficient company.

Rather than privatise the refinery,  the NNPC has chosen to pump an equivalent of 4.5 percent of Nigeria’s 2021 budget into the refurbishment of a refinery that comprehensively lost N152.89 billion between 2017 and 2019.

The corporation and its appointees have mismanaged the refinery over the years, but are still bent on continuing managing it against common economics sense.

The ICIR analysis of PHRC’s 2017-2019 financial statements has shown that the refinery is in the red and needs something different from $1.5 billion to operate as an efficient business.

Directors, workers smile to the bank amid losses

To further buttress the level of financial recklessness in Port Harcourt refinery, the total number of staff as of 2019 was 675. Their salaries, wages , allowances, redundancy and pension costs amounted to N22.195 billion. What that means is that, on the average, each staff member received N32.88 million in 2019 from a company that made no revenue. This amounted, on the average, to N2.74 million each month.

Total salaries and pays received by staff of Port Harcourt refinery between 2017 and 2019 amounted at N80.57  billion. But revenues received by the company within the period were estimated at N6.27 billion – implying that the NNPC sought N74.3 billion  from outside the refinery to pay staff salaries.

“In 2019, PH Refinery contributed zero revenue, but incurred costs of N47bn; almost N4bn a month! Instead of ending this nightmare through a #BPE core investor sale, #NNPC wants to enmesh Nigeria into a deeper financial mess by throwing $1.5bn (incl. debt) at a problem it created?” Founder of Stanbic IBTC Atedo Peterside said on his Twitter handle on March 28. 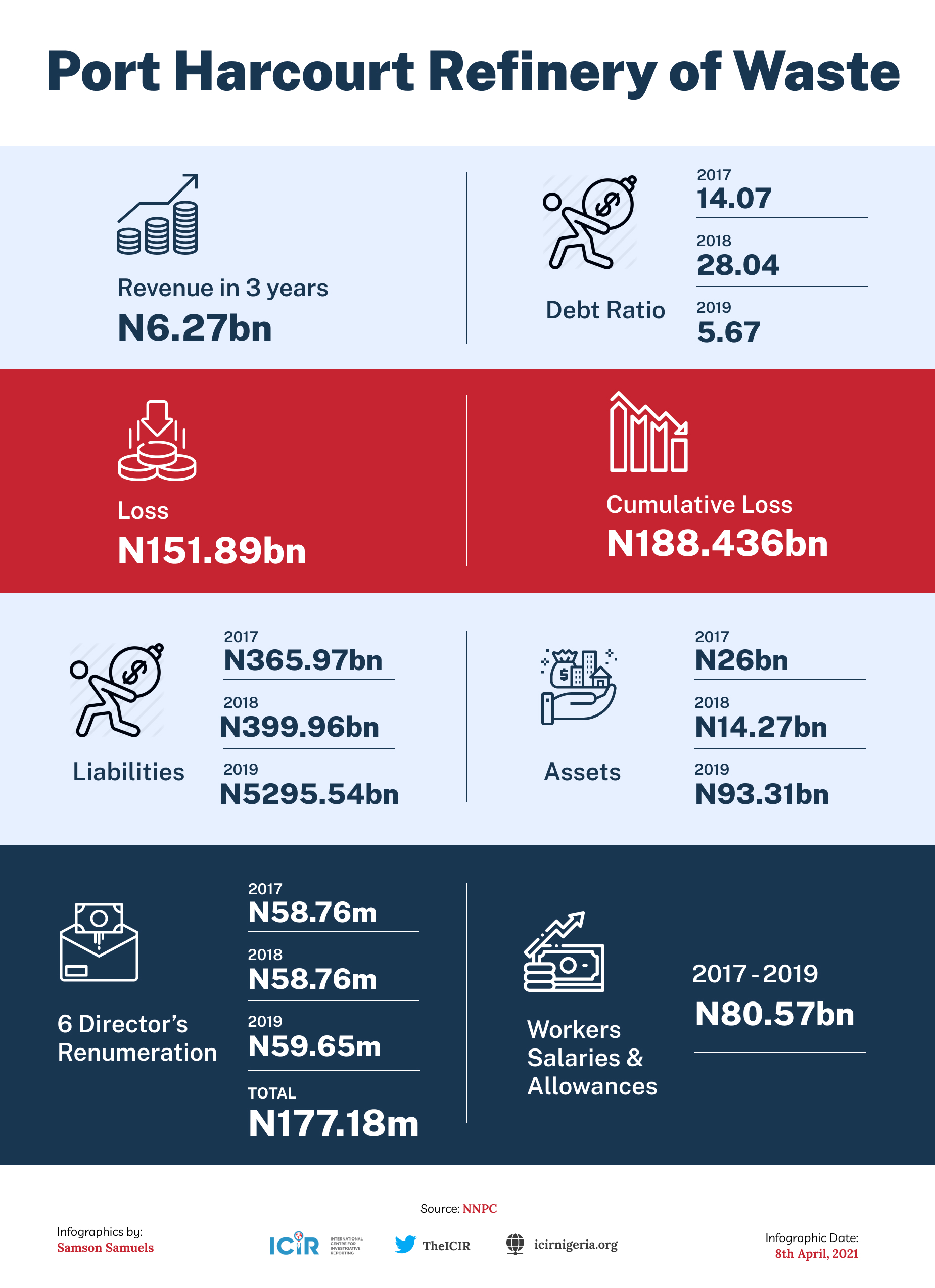 In the traditional calculation of debt ratio, total liabilities (debt) is divided by total assets. According to Investopedia, debt ratio is expected to be less than one for any firm to be considered sustainable.

In simple accounting, when liability stands above assets, it is a sign that a company like Port Harcourt refinery is headed for bankruptcy.

It means that the NNPC has been borrowing to fund activities at Port Harcourt refinery, even when its operations do not show any capacity to pay back, financial analysts say.

Financial analysts say there are many ways of calculating firm efficiency, including return on assets (ROA) and return on equity (ROE).  In 2017 to 2019, net incomes of the refinery  were negative, making ROA and ROE negative. Net income is obtained by substracting revenue or sales from cost of goods sold and other expenses, including taxes. Financial analysts say it is  nearly impossible for a company to have  positive ROA and ROE when it incurs losses -especially when it made no revenue like Port Harcourt refinery in 2019,

A negative ROA means that the company cannot generate money from its assets, implying that it is not a good investment, says Easy Portfolio, an online investment website.

It is conventional wisdom that when a business’ return on equity is negative,  shareholders are losing, rather than gaining value, said Matt Petryni a business and investment analyst of Pocketsense fame.

“This is usually a terrible sign, for investors and managers try to avoid a negative return as aggressively as possible. Most investors avoid placing their money in a company that fails to deliver positive returns consistently. Still, investors may overlook a negative return for a single tough year if they believe the company is well-positioned for long-term growth,” Petryni said.

“The nation’s four refineries, with a name-plate capacity of refining 445,000 bpd of crude, were established about 27 years ago. But the barrage of corruption, poor management, sabotage and lack of the mandatory turn around maintenance (TAM) every two years, has made all the four refineries inefficient, thereby operating at about 40 % of full capacity, at the best of times,” said Institute for Global Energy Research, on Nigeria’s refineries, in a 2004 article.

Reacting to the government’s announcement, an Economist and Senior Lecturer at Lagos Business School (LBS) Bongo Adi said it was a step in the wrong direction.

In a telephone interview with The ICIR , Adi explained said it was like government swallowing its own vomit, stressing  that none of Nigeria’s refineries had been able to meet the country’s demands for petroleum products.

“The last audit report by the NNPC showed that Kaduna refinery had not made any dime, yet it costs us billions of naira for staff payment, and that has been ongoing on for several years now.

“… I don’t think that a government that has competent people thinking for it would embark on such a wasteful project at this point in our material existence,” Adi stated.

According to Adi, what Nigerians would have expected from the government was to unbundle the petroleum assets and sell them to the private sector who could take them up for a revamp.

Like Adi, former Vice President of Nigeria Atiku Abubakar had earlier called for the privatisation of Nigerian refineries.

“For decades, I have championed the privatisation of our economy and full deregulation of our oil and gas sector, amongst other sectors, for greater service delivery and efficiency,” Atiku said in a recent tweet.

“We can no longer say we cannot afford this. We can.  As a nation, we are better off privatising our refineries and the NNPC through the time-tested LNG model in which the FG owns 49 percent equity and the private sector 51 percent,” he noted.

President of Nigerian Society of Petroleum  Engineers Joe Nwakwue said the major problem with such a refinery was policy dissonance.

“What strategic purposes does retaining full ownership of the refineries serve?” he asked, in response to The ICIR questions.

“The question  is, should we not give majority stake to the same private sector players and save ourselves the inconvenience of the additional loan burden?” he further asked.

An oil sector governance expert Henry Ademola Adigun said the refineries in Nigeria were never going to add any value to Nigerians’ lives. He wondered why the government was still holding onto them, rather than hand over their assets to the private sector.

“The fundamental question is, what is the government trying to achieve through this. Are you trying to meet local demand, shore up supply or what?” he asked.

He noted that Port Harcourt refinery had been very poor over the years, gulping billions, yet had  not worked.

“What is the market valuation done so far on it? Will this step conserve FX more for us, will it increase availability, what are we going to achieve?” he further queried.

On his part, Peterside, earlier cited, explained that many experts would prefer that the refinery be sold by BPE to core-investors with proven capacity to repair it with their own funds.

On Tuesday, the NNPC signed a  $1.5 billion deal for the rehab of the refinery.

The contract had been approved at the 38th virtual Federal Executive Council meeting presided over by President Muhammadu Buhari in Abuja.

Minister of State for Petroleum Resources Timipre Sylva had earlier informed the public that the project would be delivered in phases with the last phase due in 44 months.

The project would be jointly funded by the NNPC’s Internally Generated Revenue, budgetary allocation provisions and Afreximbank.

Group Managing Director of the NNPC Mele Kyari described the signing of the contract as a significant milestone in Federal Government’s efforts to restore the nation’s refineries to their optimum capacities.

“This is a significant moment in our economic development as a country. We are going to witness a major reduction in the importation of petroleum products and a reduction in constraint on our foreign exchange,” Kyari noted.

Kyari  noted that the publication of NNPC’s audited financial statements had improved investors’ confidence in the corporation and was instrumental in the speedy facilitation of the financing agreement for the rehabilitation of the Port Harcourt refinery by the African Export-Import Bank.

Earlier in March, Kyari had explained that in terms of outlook, the rehabilitation project would be different from the routine turnaround maintenance that was last carried out on the refinery 21 years ago.

“Unlike TAM, which should normally be executed every two years but was neglected for many years, the rehabilitation project would involve comprehensive repairs of the plant with significant replacement of critical equipment and long lead items, to ensure the integrity of the plant on the long term.”

However, many experts insist that government has no business in business and should hand the refineries to the private sector to avoid another round of financial recklessness.